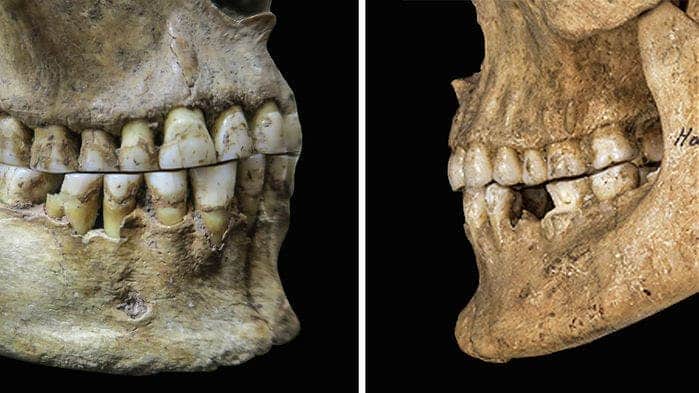 When humans invented agriculture, the world changed forever. With a steady and predictable food supply, humans were free to diversify their labor and pursuits, effectively ushering in civilization as we know it. By cultivating cereals and raising livestock, our diets also changed. This altered our face structure and led to less tooth wear. Now, a new study says that these biomechanical shifts may have allowed humans to produce new sounds such as “v” and “f”. In other words, language also changed along with diet.

Blame dairy for the “F” word

There are thousands of languages and dialects that are still spoken today, although most only have a handful of surviving speakers left. The languages are not only generally unintelligible between one another, but they can also be radically different in the way sounds that convey meaning are produced. This is why most scholars believe that biological machinery for producing human speech has remained largely unchanged since humans emerged hundreds of thousands of years ago.

A new study, however, suggests that language is more malleable by cultural influence — in this case agriculture — than previously thought. In 1985, renowned linguist Chares Hocket claimed that hunter-gatherers would find it difficult to pronounce “f” and “v” sounds — which linguists call labiodentals — due to their jaw structure. Before the advent of agriculture, humans, like most other primates, had teeth aligned edge-to-edge with the jaw due to their diet of hard food. When humans started eating softer food like cheese, tooth wear became less pronounced and as a result, more and more people kept an overbite into adulthood.

Steven Moran and colleagues at the University of Zurich put Hocket’s theory to the test by performing a complex statistical analysis of interdisciplinary evidence from linguistics, anthropology, and phonetics. A biomechanical computer model that mimics humans speech showed that having an overbite allows humans to produce “f” and “v” sounds using 29% less energy than in an edge-to-edge configuration.

“In Europe, our data suggests that the use of labiodentals has increased dramatically only in the last couple of millennia, correlated with the rise of food processing technology such as industrial milling,” Moran said in a statement. “The influence of biological conditions on the development of sounds has so far been underestimated.”

The findings are compelling but they’re definitely not the last word on the matter. Human speech organs do not use all that much energy to begin with — not relative to movement, for instance. If energy expenditure played a very important role, difficult speech sounds would have been gradually sifted out. But this is not the case, since many languages employ difficult speech sounds, such as clicks in some languages native to southern Africa.

But the authors claim that although the probabilities of generating labiodentals accidentally are low, over generations these sounds could have become incorporated into language — and having a diet-induced overbite helps to improve the odds. In the future, the researchers believe that their method could be used to reconstruct how ancient written languages were spoken aloud.

“Our results shed light on complex causal links between cultural practices, human biology and language,” Balthasar Bickel, project leader and UZH professor, said in the press release. “They also challenge the common assumption that, when it comes to language, the past sounds just like the present.”