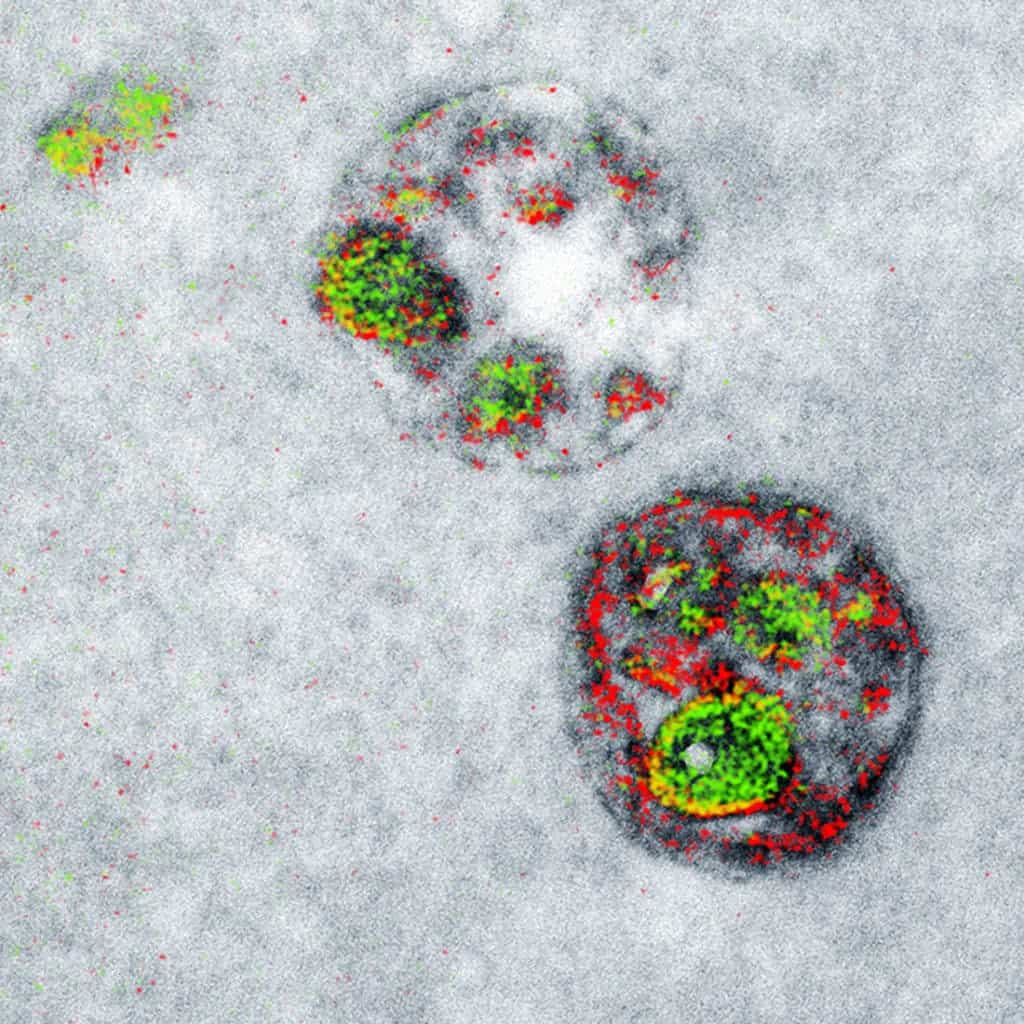 A two-color electron microscopy image of endosomal uptake of peptide proteins, a first of its kind. Credit: Cell Chemical Biology

Electron microscopy is arguably one of the most successful inventions of the past century. As the name implies, this instrument fires beams of electrons onto a sample to create a magnified image of it, typically up to two million times. Since it was invented in the 1930s, this tools has proven invaluable for research whether it’s looking at how viruses’ infect cells or how neuron synapses fire, but there’s one major drawback: the images it produces are in grayscale. Now, using a novel technique researchers at the University of California San Diego School of Medicine and Howard Hughes Medical Institute demonstrate a new electron microscopy that can image samples in multiple colours.

A touch of colour in an otherwise bleak nano world

You, me, and just about anything with eyes sees things because light particles known as photons bounce off objects and hit the retina. But some things — most of them — are smaller than an individual photon. Once you dive well into the nano world, photons become clumsy and useless for imaging purposes. So, naturally, scientists resorted to image tiny objects with the smallest particle they could easily use: the electron. Think of imaging objects like carving furniture. Naturally, you want your cutting tool to be smaller than the bulk material you want to sculpt.

The working principle of an electron microscope is fairly simple. Firstly, a beam of electrons is fired onto a sample that is prepared beforehand, typically by treating it with lead because it loves electrons so much. Everything takes place inside a vacuum chamber because electrons don’t travel optimally through the air. Instead of an optical lens you’d use in a microscope, an electron microscope (EM) employs coil-shaped electromagnets through which the electron beam travels. Just like a glass lens bends or refracts light to magnify objects sitting behind it, the EM’s coils bend the electron beams in much the same way.

The resulting EM image reveals shapes, textures or contours with incredible resolution — but no colour. This can be a problem when there are multiple features belonging to individual objects. A trained eye can get away with it, of course, and colours can be added later by hand, sort of like photoshop. But scientists’ lives could be made a whole lot easier if there was a way to produce coloured EM images from the beginning. 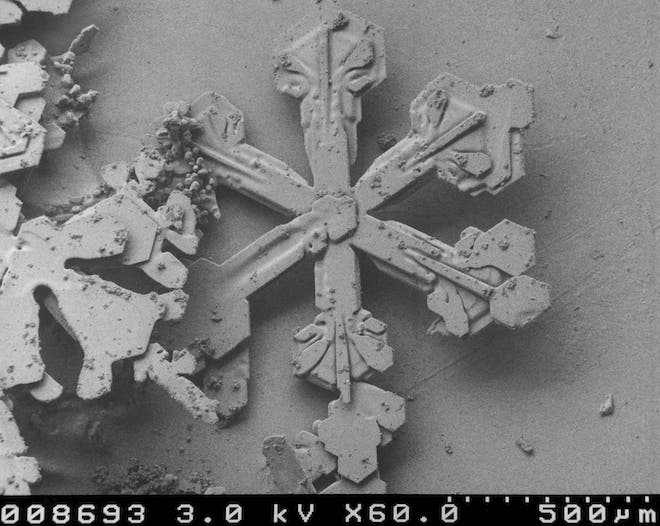 A snowflake as seen by an EM.

That’s where Mark H. Ellisman, PhD, professor in the Department of Neurosciences and director of the National Center for Microscopy and Imaging Research, and his team came in. Among the co-authors of the new paper was also Roger Tsien, PhD, professor of pharmacology, chemistry and biochemistry. Tsien won the Nobel Prize in chemistry in 2008 and, sadly, passed away this year on August 24. Now, Tsien’s legacy lives on not only through the green fluorescent proteins he conceived but also through the first ever multicolor EM.

This new technique starts off like any usual EM imaging. The sample, say a cell or protein, is treated with lead then loaded with electrons to create a grayscale image — this is the base layer. Next, the specimen is treated again, this time with rare earth minerals called lanthanides. This class of metals are very picky and only stick to certain molecule types, meaning these are the only things the microscope can see. It’s then only a matter of processing the resulting image, assigning it a colour like green, then stacking the image over the grayscale based layer. You can add multiple stacks this way and come up with variously coloured images.

“A transmission electron microscope can distinguish each of these metals by electron energy-loss to give elemental maps of each that can be overlaid in color on the familiar monochrome electron micrograph,” said first author and project scientist Stephen R. Adams.  “Each color highlights a different component of the cellular ultrastructure.”

Right now, the researchers were only able to stack two or three colours atop the base layer, as reported in the journal Cell Chemical Biology. The challenge lies in treating samples with earth metals in sequence without contaminating them. Nevertheless, today was a very good for science!

“This new method gives a more complete and easily detectable readout of the cellular components as colors,” said Adams. “In theory, we should be able to add many more colors if we can develop more ways of precipitating additional lanthanides. The method is quite simple to do, uses easily made chemicals and requires detectors that are already present on many transmission electron microscopes so it is potentially readily transferable to other laboratories. Further research is needed to improve the chemistry and sensitivity of the method, but this work will hopefully inspire other groups to devise similar methods in this field.”