The general trend in the media seems to suggest that there’s a 97% agreement between scientists regarding the validity of climate change. However, that might not be accurate. Recent studies indicate an even stronger agreement. 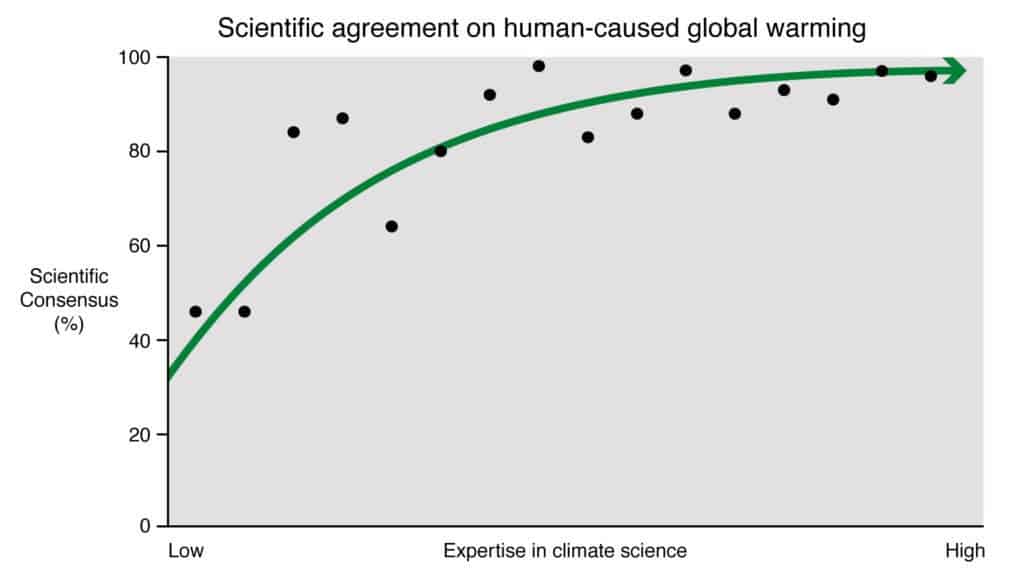 Scientific consensus on human-caused global warming as compared to the expertise of the surveyed sample. There’s a strong correlation between consensus and climate science expertise. Image Credits: John Cook.

A century ago, people thought smoking was pretty healthy — some even thought it was good for your lungs. But year after year, the evidence started piling up: smoking wasn’t good for you, it was bad. It causes cancer, heart diseases, and a myriad of other conditions. Of course, the tobacco industry was one of the first to learn about this, but they denied it. They hid the truth, they carried aggressive advertising and lobby campaigns against scientific facts, promoting laws and regulations that worked to their advantage, at the detriment of the general population. Even after the scientific evidence came in, it took decades before public opinion followed — and even more before healthy policies were set in place (in many parts of the world, there still aren’t any proper anti-smoking policies).

Something similar is happening today, except instead of smoking, we have man-made climate change.

To portray this, the media often uses the phrase “97% consensus” — likely originating from a 2014 study by Cook et al. entitled “Quantifying the consensus on anthropogenic global warming in the scientific literature“. In the study, Cook analyzed 11,944 peer-reviewed papers published between 1991-2011. Out of them, about a third (4,013) expressed a position on man-made climate change, and 3,894 (or 97%) supported the position that humans are causing climate change. The authors also found that more recent papers were increasingly attributing climate change to mankind, indicating an increasing acceptance level.

But in 2017, James Powell published an even larger meta-analysis of 54,195  peer-reviewed papers, finding a 99.94% consensus about human-caused climate change. Again, more recent papers seem to back the idea up even more overwhelmingly.

At the end of the day, a difference between 97% and 99.94% is probably not going to sway many people who aren’t already convinced. As with smoking, public opinion is slow to follow the science, and the insidious marketing and lobby machine is working in full gear. Just like the tobacco companies knew about the damage that smoking can do, oil companies have been aware of climate change for decades, but continue to fund denier and pro-fossil fuel media.

The important takeaway is that regardless of whether we like it or not, the science is in: climate change is happening, and it’s happening because of us.