Paleontologists have identified an ancient hyena-like canine that occupied eastern North America approximately 12 million years ago. The coyote-sized dog had a massive jaw which scientists say it used to crush bones. 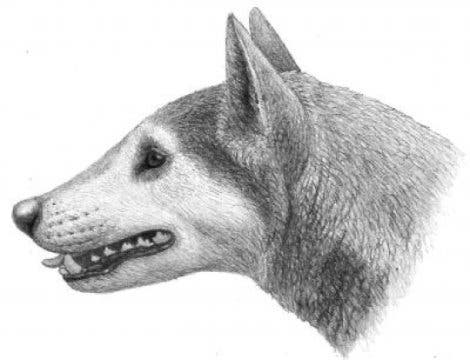 Illustration of Cynarctus by Mauricio Antón from “Dogs, Their Fossil Relatives and Evolutionary History.” Photo: University of Pennsylvania

The first fossils of  Cynarctus wangi, as the new species was named, were found by a an amateur collector in Maryland, under the Choptank Formation in Maryland’s Calvert Cliffs. The Smithsonian Institute entered the possession of the fossils, and upon a first inspection the remains were thought to belong to a borophagine dog species called marylandica.

When Steven E. Jasinski, a doctoral student in the Dept. of Earth and Environmental Science at University of Pennsylvania, investigated the fossils, though, he found significant differences. Most striking, the Maryland fossils’ occlusal surfaces, where the top and bottom teeth meet, were significantly different that those belonging to the older borophagine. This is how eventually Jasinski and colleagues claimed a new species to science.

Borophagine dogs were very widespread in North America between 30 to 10 million years ago. These were a very successful split from the Canidae group, which up until they went extinct dominated their ecological niche. Walking all five toes, instead of four like modern canines, the borophagine were the apex predators in North America. The group was also very diverse from the massive Epicyon, which was as big as a bear to the modest Strobodon stirtoni, which mimicked cats.

The last member of the family is thought to have gone extinct some two million years ago, and C. wangi was likely among these last survivors. Ancestors to modern wolves, coyotes and foxes proved far better adapted and drove the borophagine dogs extinct.

Although  C. wangi looked pretty fierce, scientists say it wasn’t that much of a meat eater. In fact, it’s diet and habits resemble those of a bear more than a wild dog, the researchers reported in the Journal of Paleontology.

“Based on its teeth, probably only about a third of its diet would have been meat,” Jasinski said. “It would have supplemented that by eating plants or insects, living more like a mini-bear than like a dog.”

Terrestrial fossils from the  Calvert Cliffs region are rare and much of what paleontologists know about the various animal species which lived around the time of C. wangi is based on marine fossils. These latest findings will serve to fit the missing pieces of what prehistoric life was like in the region. “This new dog gives us useful insight into the ecosystem of eastern North America between 12 and 13 million years ago,” Jasinski said.