Life in a hunter-gatherer tribe thousands of years ago was certainly not easy. But even though these people lacked all the basic comforts of modern society, which we all take for granted, we know that this didn’t stop them from being humane to members of the tribe.

A striking burial unearthed in Russia’s frozen landscape, at Sunghir, features the common grave of two boys, which was adorned with many riches, despite the children having been disabled. The findings suggest that at least some hunter-gatherer communities looked after disabled members until their death, even though they were technically a liability.

The Sunghir site was first excavated in 1957 but new discoveries are constantly being made. The paleolithic site, located in Russia about 190km East of Moscow, is famous for the style of the burials, which could be very lavish. Many of the buried were exhumed wearing very heavily beaded clothing.

Two Sunghir burials particularly stand out, belonging to two boys, roughly 10 and 12 years old, who were buried head to head. Their slender grave is filled with many riches, such as more than 10,000 mammoth ivory beads, 20 armbands, 300 pierced fox teeth, 16 ivory mammoth spears, deer antlers, artworks, and even two human calf bones, which were laid across the boys’ chests.

This colored photomontage shows the remains of a roughly 40-year-old man who is covered with mammoth ivory beads. Credit: Antiquity.

“The fact that they all have lots of beads probably suggests that they had clothing with lots of beads on it all the time,” study co-lead researcher Erik Trinkaus, a professor of anthropology at Washington University in St. Louis, told Live Science.

What’s more, Trinkaus and colleagues say that the two boys were disabled. The researchers performed a detailed analysis of the remains, including their dental enamel which can record what a person’s diet or lifestyle looked like. Both boys went through periods of extreme stress, their teeth seem to show. The 10-year-old boy’s thighbones are very bowed and short, though wear suggests he was physically active, nonetheless. 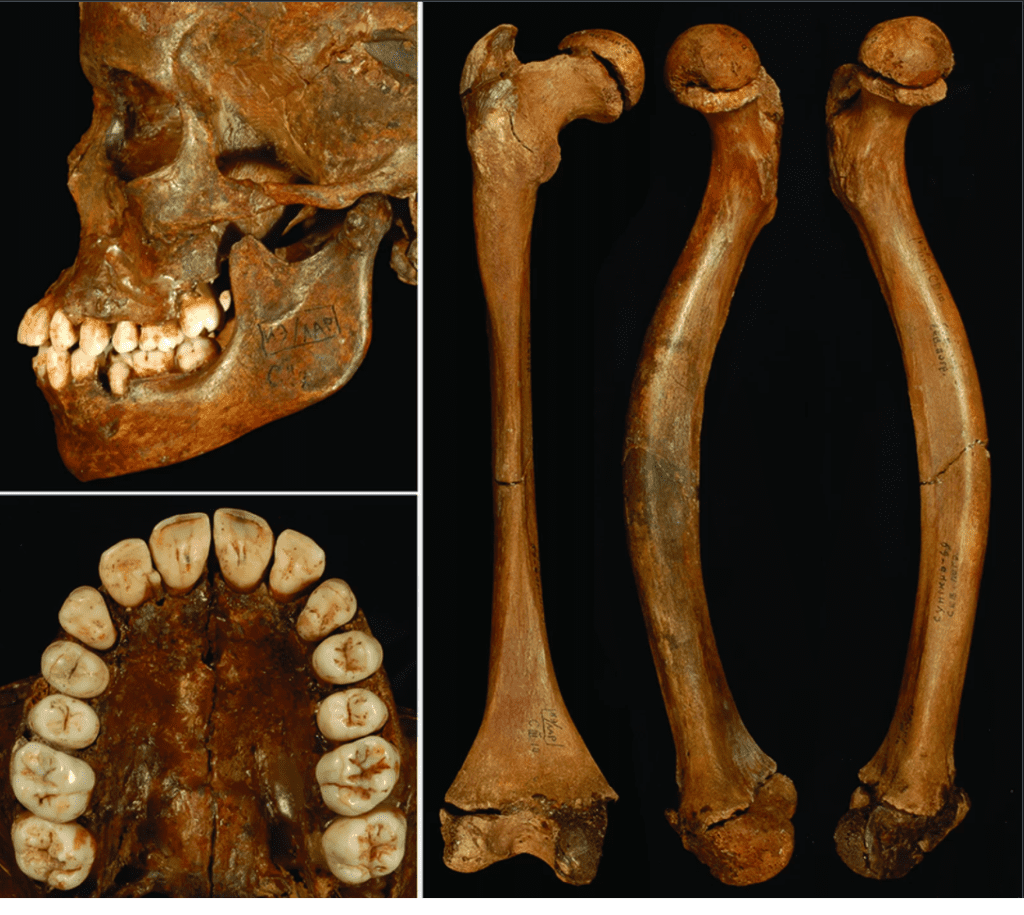 The 12-year-old boy didn’t have much wear on his teeth (top left and bottom left). He probably ate soft food. His skull was also had an unusual shape.
The thighbones of the 10-year-old boy (right) were short and bowed. Credit: Antiquity.

The 12-year-old-boy’s teeth show no signs of exceptional wear, which is surprising because Mid Upper Paleolithic people would experience tooth decay very early on. His skeleton analysis suggests that the boy was bedridden, which is striking for 34,000 years ago in a hunter-gather tribe, which we imagine must have been very mobile. The researchers think the boy was fed soft food most of his life, like porridge.

Seeing how the two boys were disabled and richly buried at the same time, scientists think the children must have been very important members of their society. Perhaps their parents were leaders in the tribe. They could have also been ritualistically buried as a sacrifice.

“Already at this time period, which is very early in the Upper Paleolithic, we already have a diversity and a complexity of human social behavior that is much more than is normally projected for hunters and gatherers at this time period,” Trinkaus said. “And it’s reflected in their mortuary behavior.”

The findings show that even in the Mid Upper Paleolithic, which were very wild times to be alive, you didn’t have to be a healthy, adult male to get an extravagant burial. What’s more, in some tribes at least, even disabled children were respected and even given amazing treatment, which might surprise many people who think hunter-gathers were more like Spartans.

Previously, researchers at Cambridge University and the University of Copenhagen analyzed the genomes of Sunghir individuals and found these were surprisingly unrelated. This suggests that hunter-gatherers knew how to form complex social structures and took precautions against inbreeding.