Last year, researchers at Google’s AI arm DeepMind made waves around the world after their machine called AlphaGo simply clobbered Lee Sedol, the very best human Go player in the world. DeepMind engineers didn’t rest on their laurels and have since written a new AI called AlphaGo Zero which is, well, insanely good. In an epic Go showdown between the two AIs, the entirely self-taught new machine beat AlphaGo 100 to 0. Zero stands for total domination, it seems.

Go might look like a simple little game but looks are deceiving. The strategy board game, originally from China and with a history spanning more than 2,500 years, involves two players, each taking turns to place pieces (called stones) on the board, making one move per turn. In Go, the board starts off empty at the beginning of the game and fills up as both players add more stones to it. Stones are played on the points where the lines cross on the board, called intersections. Very important to mention is that there are no fixed moves in Go, which means you can move stones anywhere you want and however you like. This makes Go very creative but also challenging. The purpose of the game is to use stones to surround a larger part of the board than your opponent. In other words, the player who controls the most territory on the board wins. 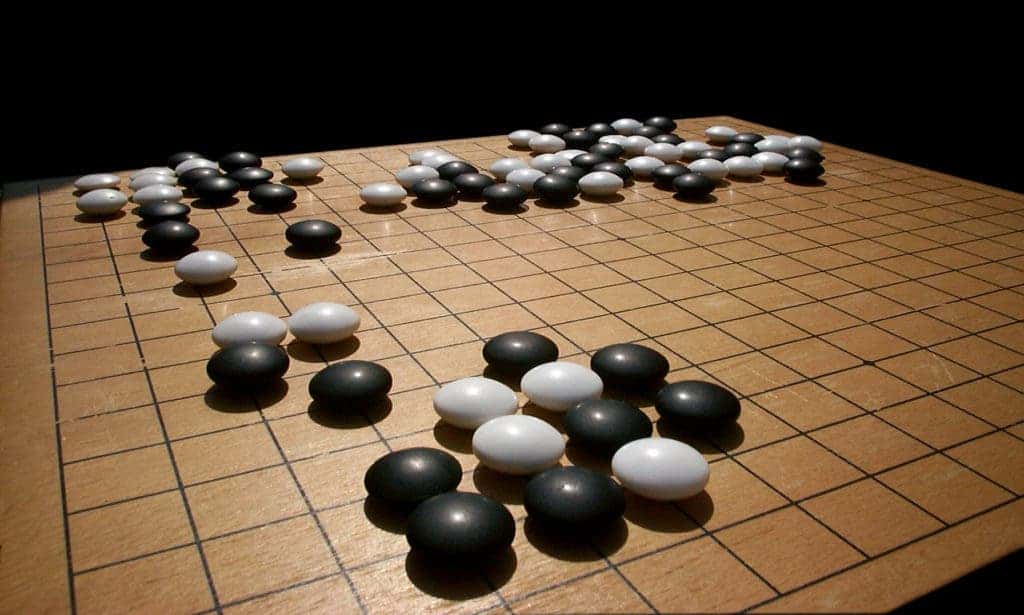 To win at Go, one of two players must surround its opponent by controlling more territory. Credit: Wikimedia Commons.

Since Go was invented, thousands of strategy books have been published but even so, there are many creative moves that haven’t been explored. Chess is seen as a very complex, brainy game but compared to its estimated 10120 possible moves, in Go you have 10761 possible moves. The total number of atoms in the universe is estimated at around 1080, for comparison.

It took humans thousands of years to reach today’s Go proficiency, and DeepMind’s AlphaGo sucked all that knowledge out. The machine learned from some 30 million moves in games played by human experts to the point where he could anticipate the opponent’s move with an accuracy of 57 percent of the time. It proved unstoppable. Sedal, the reigning human Go champion, managed to snatch a single round off AlphaGo.

Humans still got this, some might say. Sorry to break it to you but the latest news from DeepMind will burst your bubble.

AlphaGo Zero is a different beast. Unlike AlphaGo which was designed to work under human supervision and trained with previous games played by humans. AlphaGo Zero started from scratch. It was absolutely left to its own devices. To train itself, the machine simply started making random moves, learning along the way from each outcome. In time, AlphaGo Zero’s neural networks improved exponentially.

In three days, AlphaGo Zero had already played 4.9 million games. AlphaGo, the initial version that was unstoppable in the face of the human champion, couldn’t flinch a win out of a hundred when faced with this new behemoth. After only three days! After 40 days, AlphaGo Zero became the best Go player in history, after it beat AlphaGo Master (an updated, more advanced AlphaGo) 89 to 11.

What’s remarkable is that AlphaGo Zero, which started from a blank slate, employed mind-blowing, extremely creative moves which were never seen before. In less than two months, this machine went from tabula rasa to reinventing Go.

“AlphaGo Zero discovered a remarkable level of Go knowledge during its self-play training process. This included not only fundamental elements of human Go knowledge, but also non-standard strategies beyond the scope of traditional Go knowledge,” the DeepMind researchers wrote in Nature.

Elo ratings – a measure of the relative skill levels of players in competitive games such as Go – show how AlphaGo has become progressively stronger during its development. Credit: DeepMind.

Though extremely impressive, AlphaGo Zero won’t replace humans anytime soon. Go has fixed rules while humans employ general knowledge and add layers of creativity to it. We invented Go, as well as Alpha Go, after all. However, when working in a straight jacket, artificial intelligence is vastly superior to humans. As such, it could prove incredibly useful and lucrative, revolutionizing everything from investing to medicine.

“If similar techniques can be applied to other structured problems, such as protein folding, reducing energy consumption or searching for revolutionary new materials, the resulting breakthroughs have the potential to positively impact society,” writes the company in its blog post.