Researchers from the Umeå University in Sweden have created a 3D representation of the mouse pancreas, focusing especially on the distribution and volume of the insulin-producing cells. The wealth of quantitative and visual information could provide researchers with new very useful references in fighting diabetes sand other pancreas conditions.

Diabetes is one of the most common health conditions and while there are well-established treatment options out there, there’s still much to learn about it — and the key is insulin.

Insulin is a peptide hormone which regulates the metabolism of carbohydrates, fats, and protein, mostly by promoting the absorption of glucose from the blood into fat, liver and skeletal muscle cell. Insulin is produced by the pancreas in the so-called Islets of Langerhans (or pancreatic islets) — scattered by the thousands inside the pancreas.

In diabetes research, it’s often crucial to estimate the functioning and distribution of these cells. Generally, this is done by analyzing some thin sections of the pancreas and projecting the findings onto the entire organ. Yet that’s imperfect because you extrapolate from incomplete data.

“However, such analyses only provide limited information and are often ridden with relatively large margins of error since the conclusions are based only on two-dimensional data,” says Ulf Ahlgren, professor in molecular medicine at Umeå University and in charge of the publications. 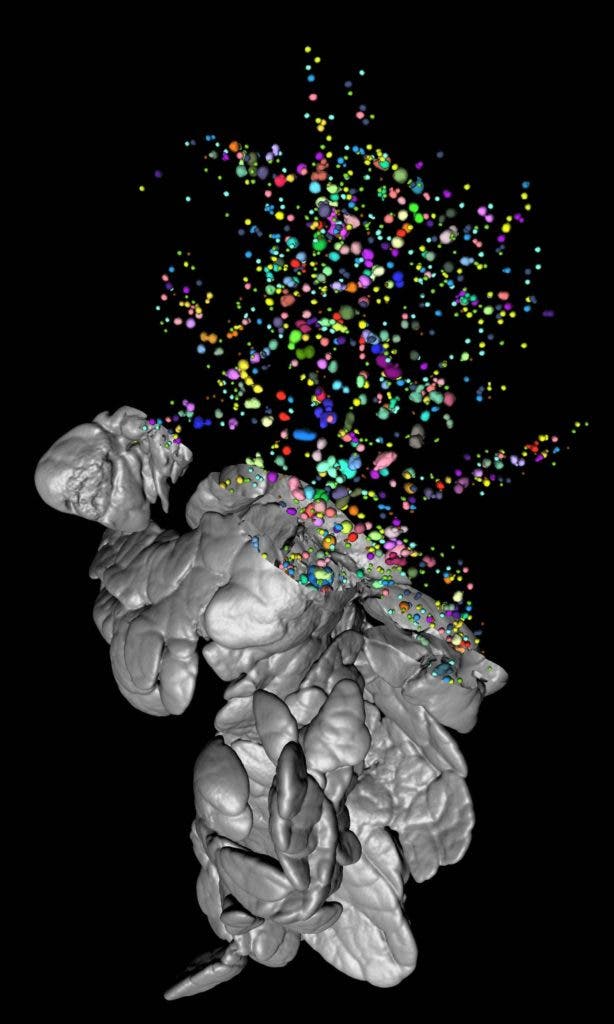 The three-dimensional visualization, created with OPT, shows the pancreas of a healthy mouse. The individual pancreatic islets have been color-coded and their exact volume and 3-D-coordinates can be precisely determined throughout the pancreas. The exocrine pancreatic tissue (in grey) has partly been digitally removed. Image credits: Ulf Ahlgren.

Ahlgren and his research colleagues at the Umeå Centre for Molecular Medicine (UCMM) have now used optical projection tomography (OPT), the optical equivalent of X-ray computed tomography or the medical CT scan — but instead of X-rays, it uses regular light.

So far, they’ve only done this for mice, but it can already make a big difference.

“We believe that the current publication represents the most comprehensive anatomical and quantitative description of the insulin cell distribution in the pancreas. By making these datasets accessible to other researchers, the data will be available for use as a powerful tool for a great number of diabetes studies. Examples may include planning of stereological analyses, in the development of non-invasive imaging techniques or various types of computational modelling and statistical analyses,” says Ulf Ahlgren.

Ahlgren published a series of 3D images, as well as information about the individual volume of the Islets of Langerhans and their 3D coordinates and appearance throughout the entire pancreas in both healthy mice and obese mice (ob/ob), at different ages. The datasets are freely available and could make a big difference for medical researchers all around the world, helping to improve and finesse their studies.