We automatically remember and forget things. According to the latest memory research, human beings primarily forget due to retrieval failure, interference, and failure to store memories, but also by intentionally forgetting. Now, a new study suggests that voluntarily letting go of a memory takes more work than holding on to it. 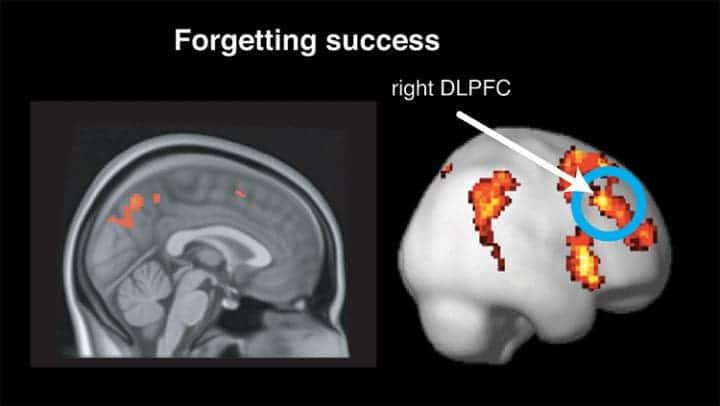 Our memories are not static, like photographs. Instead, the brain rebuilds a memory every time it is recalled — and this creates a window of opportunity for changing it. For decades, scientists have known that it is possible to intentionally discard a memory by redirecting attention away from the unwanted experience during memory formation, thus suppressing its retrieval once the memory has been formed. For instance, a study by researchers at Uppsala University in Sweden, found that a fear memory could be neutralized if the reconsolidation process is disrupted before the memory can solidify. Another recent study, this time carried out by scientists at the University of St. Andrews in Scotland, found that even when a memory can’t be erased, it can be made to feel less personal or painful.

“We may want to discard memories that trigger maladaptive responses, such as traumatic memories, so that we can respond to new experiences in more adaptive ways,” Jarrod Lewis-Peacock, the study’s senior author and a researcher at University of Texas, said in a statement.

“Decades of research has shown that we have the ability to voluntarily forget something, but how our brains do that is still being questioned. Once we can figure out how memories are weakened and devise ways to control this, we can design treatment to help people rid themselves of unwanted memories.”

The researchers at the University of Texas worked with healthy, young adults who were instructed to remember or forget images of scenes and neutral faces. Throughout the study, researchers used neuroimaging to identify patterns of brain activity. The results showed that forgotten images were associated with stronger activation of the ventral temporal cortex than remembered images. To be effective, though, this activation shouldn’t be too extreme — forgetting was the most successful when the visual cortex was moderately activated.

“A moderate level of brain activity is critical to this forgetting mechanism. Too strong, and it will strengthen the memory; too weak, and you won’t modify it,” Tracy Wang, a researcher at University of Texas and study lead author, said in a news release.

“Importantly, it’s the intention to forget that increases the activation of the memory, and when this activation hits the ‘moderate level’ sweet spot, that’s when it leads to later forgetting of that experience.”

The new study suggests that activation, rather than suppression, of unwanted information, can also be a viable forgetting strategy. The authors have also identified a new link between the voluntary control of visual attention and the long-term storage of memories.

“We’re learning how these mechanisms in our brain respond to different types of information, and it will take a lot of further research and replication of this work before we understand how to harness our ability to forget,” Lewis-Peacock said. “We’re looking not at the source of attention in the brain, but the sight of it.”

The findings appeared in the Journal of Neuroscience.