In a world where in only a few decades we went from clunky phones to wireless satellite-connected devices that allow us to be anywhere and do anything on the internet, it seems only normal that scientists will take it to the next level – to your brain. Already tested on mice, this fine mesh fits inside a syringe and unfurls on the brain to monitor its activity, creating a bio-technological interface which could revolutionize medicine. 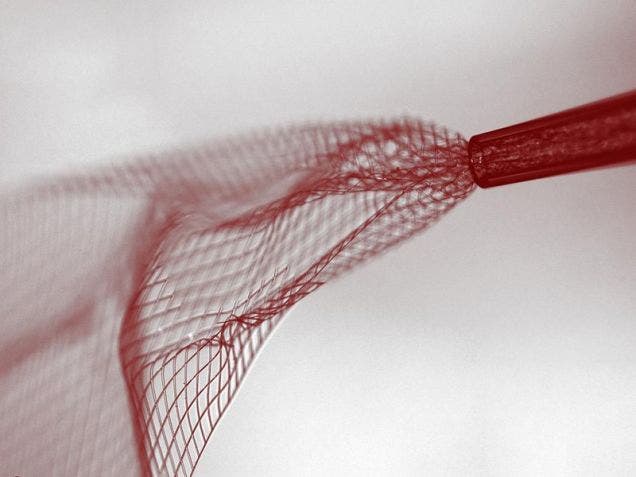 The rolled electronic mesh is injected through a glass needle into a water-based solution. (Lieber Research Group, Harvard University)

A group of chemists and engineers who work with nanotechnology published a paper in Nature Nanotechnology where they describe a new ultra-fine mesh they’ve developed that merges with the brain and creates a machine-biological functionality. For now, the mice with this electronic mesh are connected by a wire to computer — but in the future, this connection could become wireless.

“We’re trying to blur the distinction between electronic circuits and neural circuits,” says Charles Lieber, a nanotechnologist at Harvard University and co-author of a study describing the device this week in Nature Nanotechnology.

Called “mesh electronics,” the device is so thin that it can be directly injected to the brain, where it attaches to the brain. The technology was already successfully tested on mice, who not only survived the implantation, but seem to have no negative side effects. This could have a lot of potential applications, including monitoring brain activity and delivering treatment for degenerative diseases such as Parkinson’s. It might even be used to artificially boost brain capacity. 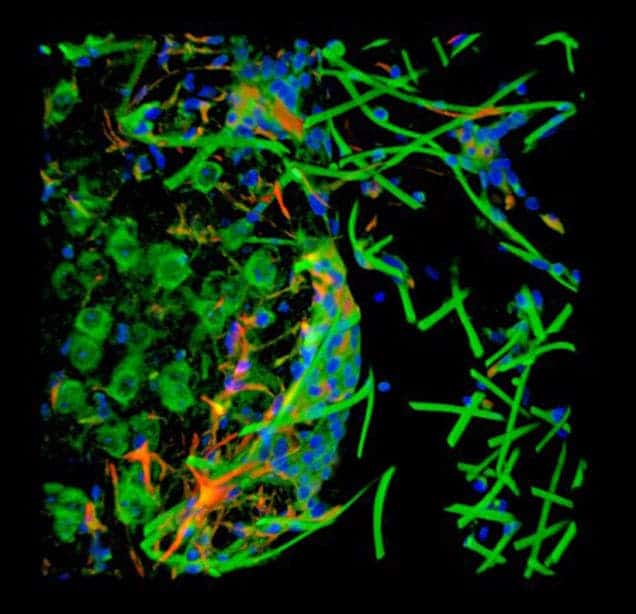 A 3-D microscope image shows the mesh injected into a region of the brain called the lateral ventricle. (Lieber Research Group, Harvard University)

“This could make some inroads to a brain interface for consumers,” says Jacob Robinson, who develops technologies that interface with the brain at Rice University. “Plugging your computer into your brain becomes a lot more palatable if all you need to do is inject something.”

The mesh also gives scientists access to previously inaccessible areas of the brain; when researchers want to study some areas of the brain of a mouse, they have to actually cut a piece from it, but this technology might change that, allowing remote research. Further down the line, delivering treatment directly to the brain could be the way to go.

It might surprise you to learn that neural electronics are already a reality for some people. Patients suffering from severe epilepsy or tremors can find relief via electric shocks, which are delivered by long wires threaded deep into the brain. Also, quadriplegics have learned to control prosthetic limbs using chips embedded in the brain. But we’re still pretty far away from actually implementing the mesh in humans. For starters, researchers need to ensure a longer mesh lifespan. Previous neural meshes have suffered from stability problems either with the signal they output or their own structure. But the team is optimistic that this time, the mesh will blend in with the brain and quietly fit in the empty gaps.

“We have to walk before we can run, but we think we can really revolutionize our ability to interface with the brain,” says Lieber.