Scientists at Rice University have converted common materials, such as food, cloth, and paper, into graphene with a special laser. Graphene is conductive so electronics can be embedded into almost any substance, in any pattern. This means that you could have a graphene label on an apple that is a bar-code or a sensor that tells you where the apple came from and if it is safe to eat, and you could still eat the label. 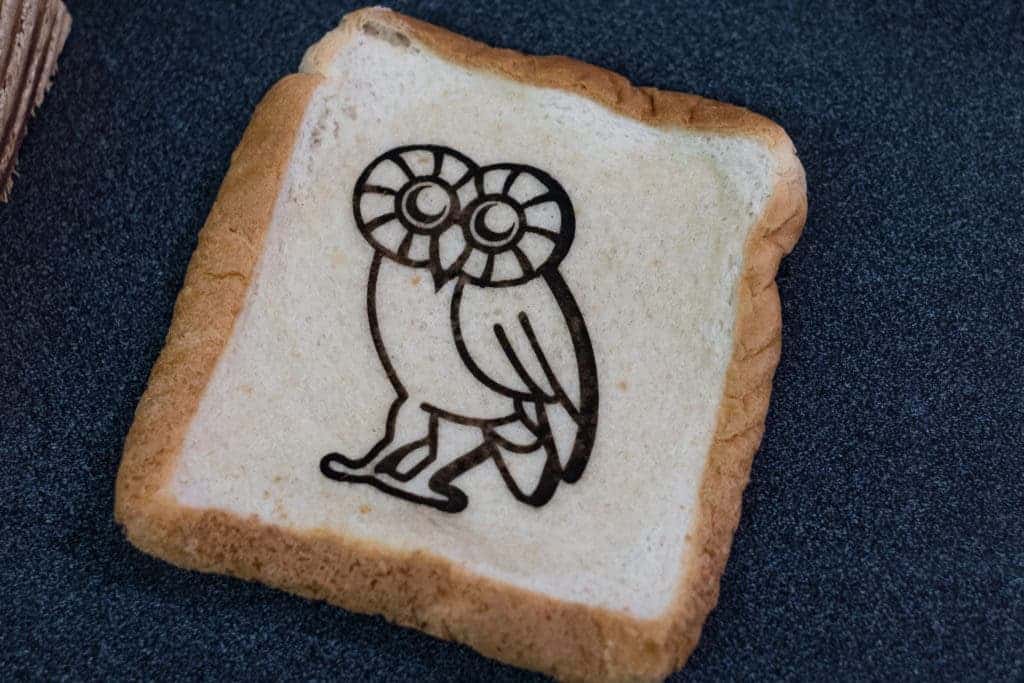 A graphene “tag” on a piece of toast. Image credits: Jeff Fitlow/Rice University.

Graphene is viewed as one of the most important recent discoveries. It is a material made of single atomic sheets of graphite and has a two-dimensional structure which makes it easy to stack and still keep super thin. It is extremely strong, light, stiff, thin, almost transparent, and really good at conducting electricity and heat. Therefore, it has tremendous potential for electronics.

The real advance that the researchers at Rice University made is to make graphene out of any substance. Previously, it was only possible to make graphene from certain polymers. The graphene is not printed or stuck on the organic materials used, it is actually a part of the material. The researchers used a defocused laser so that it first turns the object’s surface into amorphous carbon and then, after subsequent laser passes, into graphene. Defocusing the laser made the beam wider so a target could be lased multiple times in one raster time. This allowed the process to be quicker and more precise.

“This is not ink,” Rice lab of chemist James Tour said, “This is taking the material itself and converting it into graphene.”

“Very often, we don’t see the advantage of something until we make it available,” Tour said. “Perhaps all food will have a tiny RFID tag that gives you information about where it’s been, how long it’s been stored, its country and city of origin and the path it took to get to your table.”

Theoretically, anything with a high enough carbon content can be turned into graphene. All of the materials converted have lignin, which appears to a carbon precursor that makes it easier to convert to graphene. For example, cork, coconut shells, and potato skins have a high lignin content. Additionally to food, an interesting application could be in wearable electronics. Perhaps in the near future, you could have a jacket with built-in heating or exercise clothing with a sensor that measures heart rate.