The extinction of the largest fish to have ever swum the world’s oceans is shrouded in mystery. Megalodon dominated the oceans for millions of years during the Miocene and Pliocene epochs until it abruptly disappeared before the onset of a massive ice age 2.6 million years ago. A new study suggests that the iconic extinct shark was significantly warmer than its modern cousins, which may have sped up its demise in the face of cooling waters due to climate change.

An active metabolism that needed a lot of food

In comparison to Megalodon (Otodus megalodon), the Great White Shark seems like a guppy. The extinct shark achieved lengths up to nearly 20 meters and weights exceeding 20,000 kg — and if its formidable size wasn’t enough, the huge fish also had razor sharp teeth, each as long as 18 centimeters (about the size of a human hand). 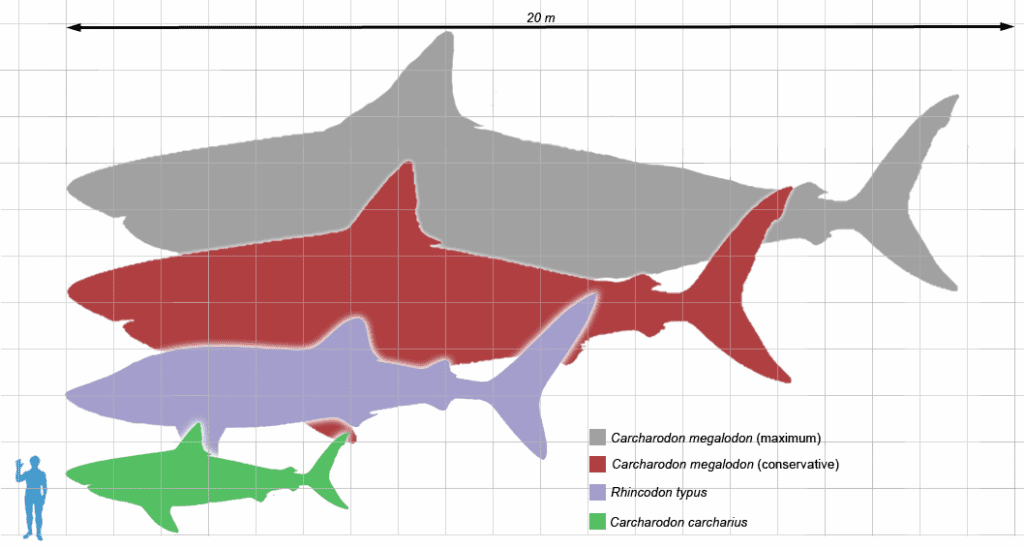 The earliest Megalodon fossils — almost exclusively comprised of teeth — suggest the marine predator first appeared about 23 million years ago. A 2014 study performed by Swiss researchers found that all signs of the creature’s existence ended 2.6 million years ago. It’s not clear what brought Megalodon’s demise but a new study presented at the annual meeting of the American Geophysical Union (AGU) suggests that thermoregulation may have played a major role.

The team of researchers at William Paterson University (WPU), the University of California Los Angeles, and DePaul University employed a novel geochemical method called clumped isotope thermometry (CIT). By analyzing the concentrations of oxygen-18 (18O) and carbon-13 (13C) isotopes within the carbon dioxide (CO2) of tooth enamel, it’s possible to tease out an animal’s body temperature. A lower concentration of clumped isotopes means that the enamel was formed at a higher body temperature

In order to verify the method, the researchers first worked with teeth from aquarium-reared and wild-caught sharks from areas with known temperature records. The method proved quite accurate.

Next, once the method was calibrated, the researchers analyzed the teeth of Megalodon and other ancient shark species, showing that the huge marine creature was a bit warmer than its coexisting shark species and modern sharks such as great whites.

Perhaps, Megalodon may have also been warm-blooded, although that is quite an assumption, judging from enamel isotopes alone. The relatively high body temperature, however, may be a sign of an active metabolism that required lots of prey and frequent feeding. When the planet went through a particularly tough ice age, Megalodon may have been too big for its own good, with too little prey to spare in order to sustain its high body temperature. Coupled with competition from other predators, such as toothed whales, Megalodon went on a downward spiral.

“While still preliminary, these results may provide clues as to what may have led to the demise of O. megalodon during the Pliocene. For example, one hypothesis is that O. megalodon consumed large quantities of prey in order to maintain such a high body temperature. However, cooling of ocean temperatures during the Pliocene would have constrained the species to lower latitudes where ocean temperatures were warmer, whilst its preferred prey (e.g., whales) evolved traits to adapt to cooler temperatures of the higher latitudes. Therefore, large climatic shifts combined with evolutionary limitations may provide the “smoking gun” for the extinction of the largest shark species to ever roam the planet,” wrote the researchers.

Next, the authors plan to analyze other isotope ratios in megalodon teeth, such as calcium-44/calcium-40 or oxygen-16/oxygen-18. The former can reveal more details about a creature’s diet, such as if a certain prey was more abundant, whereas the latter ratio can record information like seawater chemistry and temperature. Together, all of these methods could help paint a bigger picture of Megalodon’s demise.