Five years ago, Reddit user kepleronlyknows posted a map that illustrated the longest straight-line path on Earth without hitting land. The nearly 20,000-mile-long route begins in southern Pakistan and ends on northeastern Russia. Now, a pair of researchers has officially confirmed the proposed path — they calculated both the longest sailable and longest drivable paths on Earth. 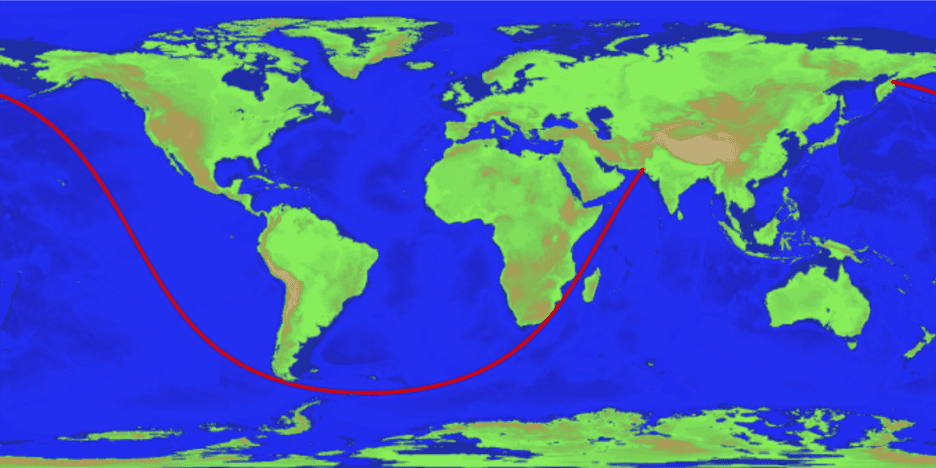 Rohan Chabukswar of the United Technologies Research Center in Ireland and Kushal Mukherjee of IBM Research in India wrote an algorithm that calculates the longest straight path on both land and water. Their model processed data from the National Oceanic and Atmospheric Administration’s ETOPO1 Global Relief model of Earth’s surface. The model’s spatial resolution is about 1.8 kilometers, meaning this is the size of the smallest feature on the map. Because the model also captures altimetry data, the researchers could accurately tell which point on the map was on land or water.

For this purpose, the Earth can be regarded as a sphere, so the distance between two points on its surface traces an arc or the segment of a great circle. A great circle always crosses the maximum circumference of the sphere, meaning it will always lie in the same plane as the center of the sphere. The equator is a great circle, for instance.

The most challenging part of the study was optimizing the plotted routes. The model rendered 233,280,000 possible great circles, with each containing 21,600 points on either land or sea — that’s 5 trillion points to consider, in total. Brute-forcing these many data points would take forever, so the pair of researchers used a technique called branch and bound, which treats possible solutions as branches on a tree. The algorithm goes through one branch after another, where each branch is a subset of possible solutions. The bounding part, however, optimizes the search so only a few subsets of all the possible great circles are considered — the most promising ones that are close to the optimal path. With each iteration, the search for the optimal paths is fine-tuned. It took only 10 minutes on a commercially available laptop to complete the model. 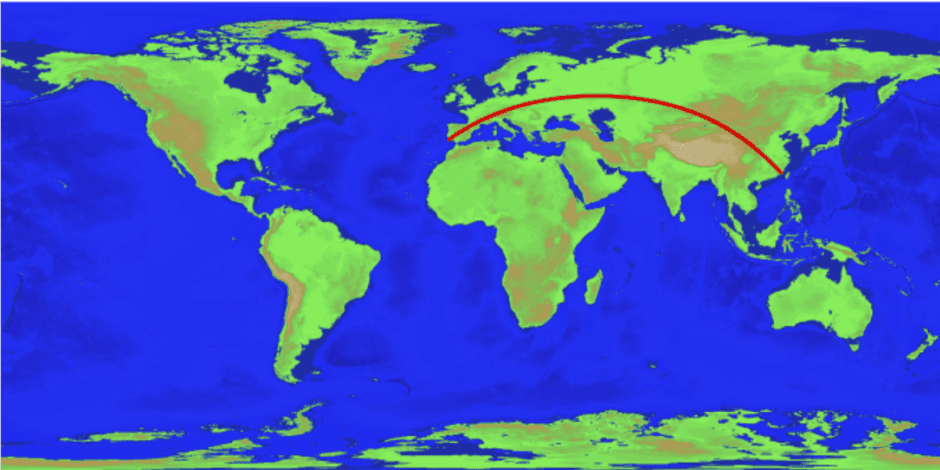 The search confirmed the Redditor’s original assertion, finding that the longest-straight path on Earth without hitting land measures 32,089.7 kilometers — or about 19,940 miles. A boat journey along this path would start from Sonmiani, Pakistan, taking you along the shores of Madagascar and continental Africa, squeezing in between South America and Antarctica, before heading north-northwest across the Pacific dodging the Alaskan archipelago until finally landing in the Karaginsky District in Russia.

When the algorithm was run with the parameters in reverse, it produced the longest straight path on land. It starts in Jinjiang, Fujian, in China, and ends at Portugal. The 11,241-kilometers-long route — or about 6,985 miles — passes through 15 countries.

The findings were reported last week in the preprint server arXiv.