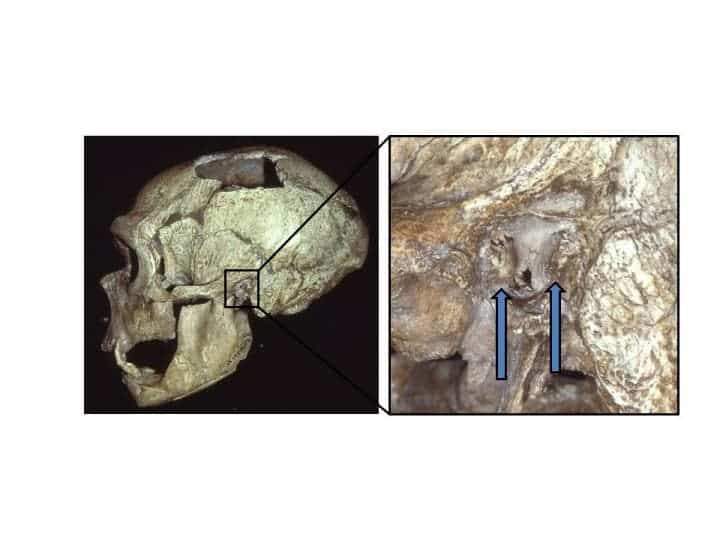 Researchers examined the ear canals of ancient humans, including early modern humans and Neanderthals, finding abnormal bony growths were common among Neanderthals. This condition is known as “swimmer’s ear” and is mostly caused by habitual exposure to cold water or air.

Swimmer’s ear, or acute diffuse external otitis, usually occurs when bacteria from water infect the ear. If the condition is left untreated, dense bony growths can protrude into the ear canal.

This feature has been documented in ancient humans before, but it’s only recently that Erik Trinkaus and colleagues at Washington University investigated how ‘swimmer’s ear’ might reveal insights into the lifestyles of our ancestors.

For their study, Trinkaus and colleagues examined the preserved ear canals belonging to 77 ancient humans from the Middle to Late Pleistocene Epoch in western Eurasia.

However, ‘swimmer’s ear’ was exceptionally common among Neanderthals — about half of the 23 Neanderthals included in the study exhibited mild to severe exostoses.

Writing in the journal PLoS ONE, the authors say that multiple factors may explain the high abundance of exostoses, including the environment and genetics.

“An exceptionally high frequency of external auditory exostoses (bony growths in the ear canal; “swimmer’s ear”) among the Neandertals, and a more modest level among high latitude earlier Upper Paleolithic modern humans, indicate a higher frequency of aquatic resource exploitation among both groups of humans than is suggested by the archeological record. In particular, it reinforces the foraging abilities and resource diversity of the Neandertals,” Trinkaus said in a statement.