We live in a globalized, capitalist world. As a result, there is ruthless competition between countries all over the world to offer produce and products at the cheapest price. It is well known that companies that export food sacrifice their environment by destroying natural ecosystems such as forests and wetlands to grow monocultures. It has been thought that countries that import food are then saved these costs on their own environment. It turns out that competition and crop choices, influenced by the imported products, also have negative environmental consequences.

Local farmers often get outcompeted by foreign companies because they usually produce crops on a smaller-scale and do not have expensive equipment, which can make production more efficient. In a report in the Proceedings of the National Academy of Sciences, researchers at Michigan State University looked at how being outcompeted can force farmers to make decisions that are more detrimental to the environment. In particular, they looked at the trade of soybeans in China.

“What is obvious is not always the whole truth,” said Jianguo “Jack” Liu director of MSU’s Center for Systems Integration and Sustainability and senior author of the paper. “Unless a world is examined in a systemic, holistic way, environmental costs will be overlooked.”

The demand for soybeans has drastically increased in China as the population is becoming more affluent. China now buys 60% of the world’s exported soybeans, mostly from Brazil. Chinese farmers are not able to compete with these ultra cheap prices. 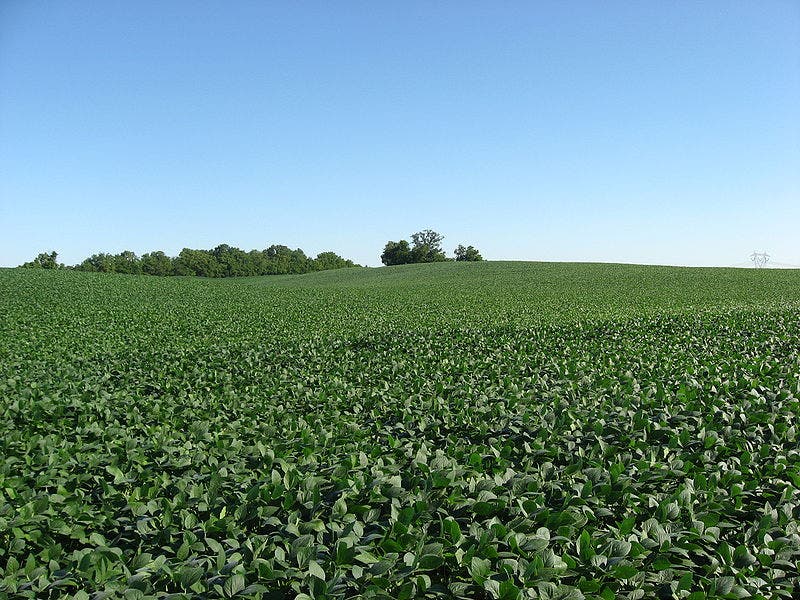 An expansive soybean field in the USA. Image credits: Nyttend.

We know all about how Brazil is destroying its rainforest to produce crops instead. When Chinese farmers are not successful growing soybeans, they switch to other crops that could need more nutrients and water. Chinese farmers often switched to growing rice or corn, instead of soybeans. While soybeans are a relatively sustainable crop, requiring little input, the other options aren’t so environmentally friendly. The researchers studied the soil in China’s most productive cropland in the northeast of the country. The soybean fields that were converted to rice paddies produced the most nitrogen pollution, while those converted to cornfields produced the second most. In an analysis of 160 studies, countries that imported soybeans, such as Vietnam and Japan, had higher nitrogen pollution.

“This research demonstrates a surprising environmental impact of global agricultural trade,” says Betsy Von Holle, a director of the National Science Foundation’s Dynamics of Coupled Natural and Human Systems program, which funded the study. “If the importing country switches from a more sustainable crop, such as soybeans, to one that needs more water and nutrients, such as corn, the nitrogen pollution that results can harm the environment of the importing country.”

This study about soybeans is not the only case of this phenomenon. Mexico was outcompeted by cheap American corn and now grows vegetables that demand more nitrogen. There are hidden impacts of the current economic system, which put more strain on the environment and water supplies.