A new paper reports that street and building layout plays a major role in a city’s urban heat island effect, which makes them hotter than their surroundings. 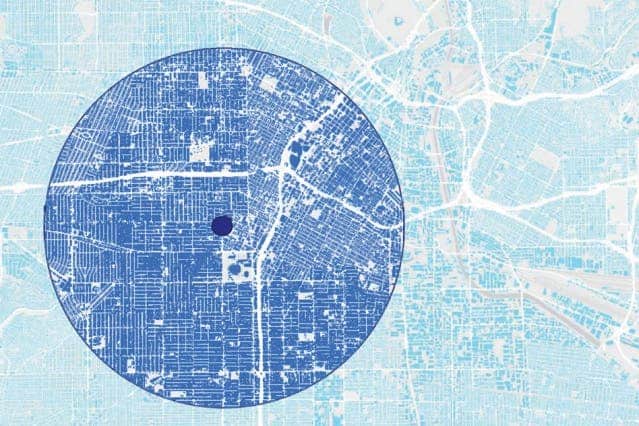 Cities with an orderly pattern have a much greater urban heat island effect than those with a more disorderly pattern.
Image credits Pellenq et al., 2018, Physical Rev. Letters.

If you’re an American living in a big city, you’re probably used to all the streets and buildings being laid out in an orderly grid. If you happen to be European, not so much — our cities still sport the chaotic, sprawling road networks set down ages ago. While it can make navigation a pain, the latter can also help keep cities cool, according to new research led by MIT and National Center for Scientific Research senior research scientist Roland Pellenq.

The findings suggest that cities laid out in precise grids, like New York or Chicago, experience a far greater buildup of heat relative to their surroundings than those arranged more chaotically, like London or Boston.

The heat island effect is a product of the fact that building materials, like concrete, absorb heat during the day and radiate it out at night. Natural areas also trap some heat, but it’s a tiny amount compared to cities — mostly because plants use up incoming sunlight during photosynthesis. Heat island effects can make cities over 5° Celsius (10° Fahrenheit) warmer than surroundings, in areas that get a lot of sunlight. It can cause health issues for city dwellers and causes energy use to spike during hot weather. So, a better understanding of the effect can improve quality of life for residents and presents (several) economic advantages to boot.

To explore the heat island effect, the team adapted mathematical models that were developed to analyze the atomic structures in materials, developing a new and straightforward method to study the relationship between a city’s design and its heat-island effect. Such systems describe how individual atoms in a material are influenced by other atoms, and the team reduced the simulation to much simpler, statistical descriptions of how far away buildings are from each other. Then, they applied them to patterns of buildings in 47 cities, from the U.S. and also from other countries.

Each city was thus ascribed a ‘local order parameter,’ ranging between 0 (total disorder) and 1 (perfectly ordered structure, which is generally a description of how orderly atoms in a material are — typically, this parameter is obtained by bombarding a sample with neutrons. For this paper, however, Pellenq and his team used Google maps to pinpoint the location of each building. The cities included in the paper varied from 0.5 to 0.9 on their local order parameter.

Temperature data was recorded for each city by two stations — one within the city proper, and another outside but still close — which were used to determine the heat island effect in each case.

The team reports that the heat island effect seems to result from the interactions between buildings that radiate and re-radiate heat. This heat can be trapped by other buildings that face them directly, the team reports, meaning the city has a very hard time cooling off. They estimated that in the state of Florida alone, urban heat island effects lead to some $400 million in excess costs for air conditioning per year.

So, understanding how it works and planning around the effect might have significant benefits, especially for countries such as China that are rapidly building new cities, or areas of rapid urban expansion. In hot locations, cities could be designed to minimize the extra heating, while colder places might benefit from amplifying the effect.

“This gives a strategy for urban planners,” says Pellenq.

“If you’re planning a new section of Phoenix, you don’t want to build on a grid, since it’s already a very hot place. But somewhere in Canada, a mayor may say no, we’ll choose to use the grid, to keep the city warmer.”

Other important findings of the study are that research on construction materials can offer a way forward in regards to heat management and heat interactions between buildings.

The paper “Role of city texture in urban heat islands at nighttime” has been published in the journal Physical Review Letters.