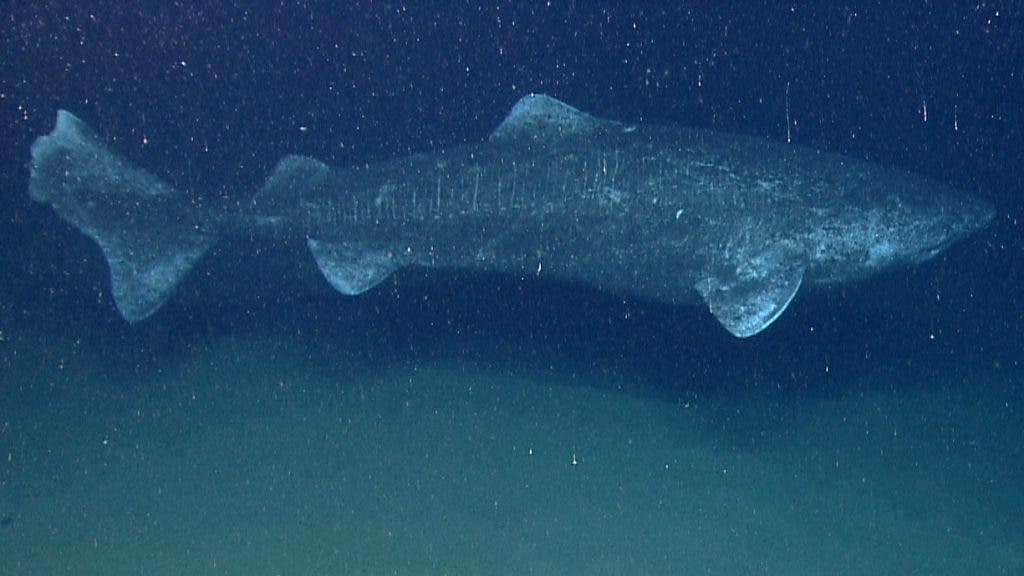 A shark that grows only a couple centimeters every year, but is capable of growing to several meters in length, may be the oldest living vertebrate in the world. Meet the Greenland Shark, a massive creature that lurks beneath the chilling waters of the sub-Arctic ocean. One specimen that is larger than 6.5 meters (21 feet) in length and heavier than 900 kilos is at least 272 years old but could be as old as 512. Take a moment to let that sink in — that’s older than America and much older than Jonathan, a Seychelles giant tortoise from the island of Saint Helena, which holds the record for the oldest terrestrial animal at 183 years of age.

The findings were reported in the journal Science by Julius Nielsen, a marine biologist at the University of Copenhagen who will soon present his Ph.D. thesis on the Greenland Shark.

The elderly giants of the freezing seas

Although they’re very large, rivaling the Great White in size, and are known to eat animals like the polar bear, horse, moose, and reindeer,  these venerable sea beasts are actually quite non-aggressive and harmless to humans — unless you try to eat them. And because of its unconventional range and habitat, the Greenland shark is still a mysterious species to scientists. Of the 465 known species of sharks, only eight live in the Arctic, among them the Greenland shark which can grow to gargantuan sizes. It’s officially the biggest fish in the Arctic.

Sluggish Greenland Sharks can rarely be spotted, often choosing to live in deep waters, often as far as 400-600 meters below the water’s surface. This is why Nielsen and colleagues had to rely on specimens retrieved as by-catch in fishing expeditions. Fishermen don’t actively pursue the Greenland Sharks but catch them by mistake while setting their nets for more agreeable prey like cod or trout. They certainly don’t make good meals — the Greenland Shark’s flesh is packed with toxins and eating it is considered highly poisonous.

The team managed to retrieve 28 female sharks measuring 31 in. to 16.4 ft. (81 cm to 502 cm). Typically, to determine the age of fish, scientists study the growth bands in a calcified tissue located in the ear called the otolith, sort of like measuring the rings of a tree trunk to see how old it is. Since sharks don’t have this tissue, the researchers turned to a very unconventional proxy: the lenses of their eyes.

Shark lenses are formed in the uterus, which means whatever the shark mother ate made its way into the offspring. By measuring the radiocarbon isotopes found in the core lens, scientists can determine what the environment was like before a shark was born and, hence, its age.

The late 1950s saw thousands of atomic bomb tests which caused a spike in the amount of radiocarbon that eventually made its way into the sea — this is known as the ‘bomb pulse’. If a shark has high levels of Carbon-14 in its core lens, on par with bomb pulse readings, it clearly means the animal is at least 60 years old.

In this case, two of the smallest sharks had a post-bomb pulse isotopic reading making them as 50 years or younger. The third smallest shark though had radiocarbon levels right at the onset of the bomb, making it 60 years old. The rest of the 25 sharks all had pre-bomb pulse readings suggesting they were all at least 60 years old.

“Fish biologists have tried to determine the age and longevity of Greenland sharks for decades, but without success.” said Steven Campana, a shark expert from the University of Iceland, who was not involved in the study. “Given that this shark is the apex predator (king of the food chain) in Arctic waters, it is almost unbelievable that we didn’t know whether the shark lives for 20 years, or for 1000 years.”

By comparing these readings with a published database of known levels of radiocarbon in the ocean from various years, scientists could estimate the age of the sharks. To improve the estimates, the researchers also assumed that the larger the shark the older it was. When this was factored in, Nielsen found that the largest shark they studied could be up to 512 years old. If true, that’s simply mind-blowing! Imagine one single individual minding its own business for centuries while the rest of the world around it has been dramatically altered by some other species whose individuals can barely crack 80 in age.

Not only is the Greenland shark perhaps the longest-living vertebrate, but it might also be a terribly difficult one to breed. Some of the smallest sharks studied measured 31 inches, making them juveniles — at an age 50 to 60 years! Since Greenland sharks are known not to reach sexual maturity until they grow to 13 ft. (4 m), this means that these sharks would have to wait nearly 150 years before they’re ready to become parents. Clearly, that makes them very vulnerable to extinction. Luckily they’re poisonous and smell really, really bad, making them very uninteresting to humans; maybe they’re lucky.