Researchers from the European Space Agency (ESA) and the National Aeronautics and Space Administration (NASA) have been trying to figure out how Titan’s seas formed – more exactly, how the depressions in which the seas are formed. 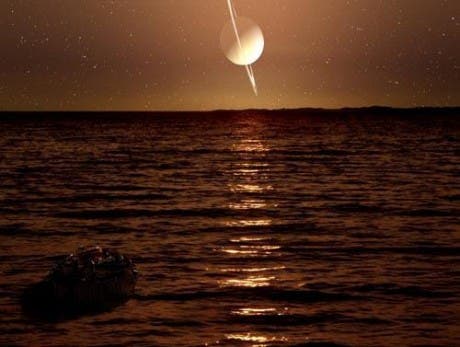 Titan is Saturn’s largest moon and the only known satellite with an atmosphere and the only object other than Earth where clear evidence of stable bodies of surface liquid has been found. But don’t start thinking about water – Titan’s climate involves hydrocarbons such as methane and ethane. At its two poles, the moon features thousands of hydrocarbon lakes, many as big as the Great Lakes.

This happens because of Titan’s extremely low temperature, which keeps methane and ethane liquid. But having liquids is not enough for having lakes and seas – you also need some place where those liquids can accumulate: a depression.

They concluded that Titan’s depressions were formed through a similar process which forms sinkholes here on Earth: dissolution. Sinkholes are natural depressions typically caused by karst processes. Karst processes occur when the bedrocks are soluble, like in carbonate rocks (such as limestone or dolomite) or evaporitic rocks (such as gypsum or anhydrite). But unlike sinkholes on Earth, depressions on Titan take much longer to form.

Polar clouds, made of methane, on Titan (left) compared with polar clouds on Earth (right), which are made of water or water ice. Image via Wikipedia.

“We found that the dissolution process occurs on Titan some 30 times slower than on Earth due to the longer length of Titan’s year and the fact it only rains during Titan summer. Nonetheless, we believe that dissolution is a major case of landscape evolution on Titan and could be the beginning of its lakes.”

Still, this is just a theory for now, because of course, there is no way to observe the geological processes on Titan from ground level… yet. NASA’s Glenn COMPASS Team discussed at large the possibility of exploring Titan, Saturn’s largest moon, with a robotic submarine that would dive deep inside the oceans of liquefied natural gas