Images from the European Space Agency’s Mars Express mission revealed an extraordinary feature, but the feature poses more questions than it answers: is it the remnant of an ancient supervolcano, or the crater of a meteorite crash? 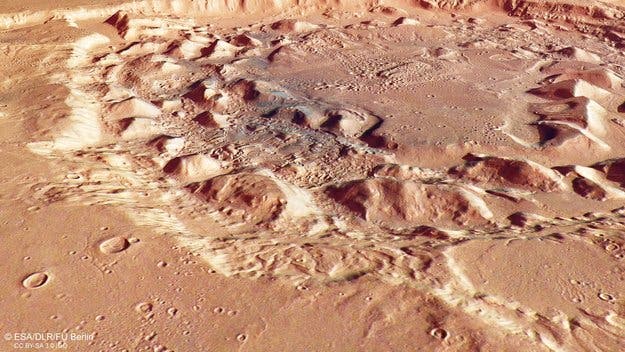 Back in 2003, the European Space Agency (ESA) launched Mars Express — a mission with the goal of exploring Mars. More than 14 years later, the orbiter is still providing valuable insight into the Red Planet. Now, it has sent astronomers on Earth pictures of an intriguing feature called Ismenia Patera.

Patera means ‘flat bowl’ in Latin, and it’s as accurate a name as any. Measuring some 75 km across, it has a flat central area, surrounded by a ring of hills, blocks, and lumps of rock which seem to have been ejected from the center. The feature lies in a transition area which lies between Mars’ southern mountains and its northern plains.

The Martian topography is split into two parts: the northern lowland and the southern highlands — the latter being a few kilometers higher. This clear split is an extremely interesting puzzle for researchers, as the cause of this split isn’t really clear. It could be a massive impact, several smaller impacts, tectonic activity, or even supervolcanoes — whatever the reason may be, it remains hidden for now.

Understanding Ismenia Patera could be a much-needed puzzle piece that would allow astronomers to understand the transition area, and ultimately, the geological history of Mars.

However, things are not very clear. There are two competing theories: the first one is that it’s a volcano — a supervolcano to be more precise. At some point, the supervolcano would have undergone a massive eruption, which would eject huge quantities of material outwards, collapsing after the magma was thrown out.

The other theory is that it’s actually the site of a meteorite that collided with Mars at some point. So far, the visual data and our limited knowledge of Martian geology are our only clues regarding the nature of this feature. The transitional area shows signs of being the location of an ancient and long-inactive volcanic province. Ismenia Patera does have an irregular shape, low topographic relief, and relatively uplifted rims, which would suggest a volcanic nature. But then again, Mars is also riddled with numerous impact craters, so this remains an open question.