An innovative approach could help monitor elephants using earthquakes, and even protect them from poachers. 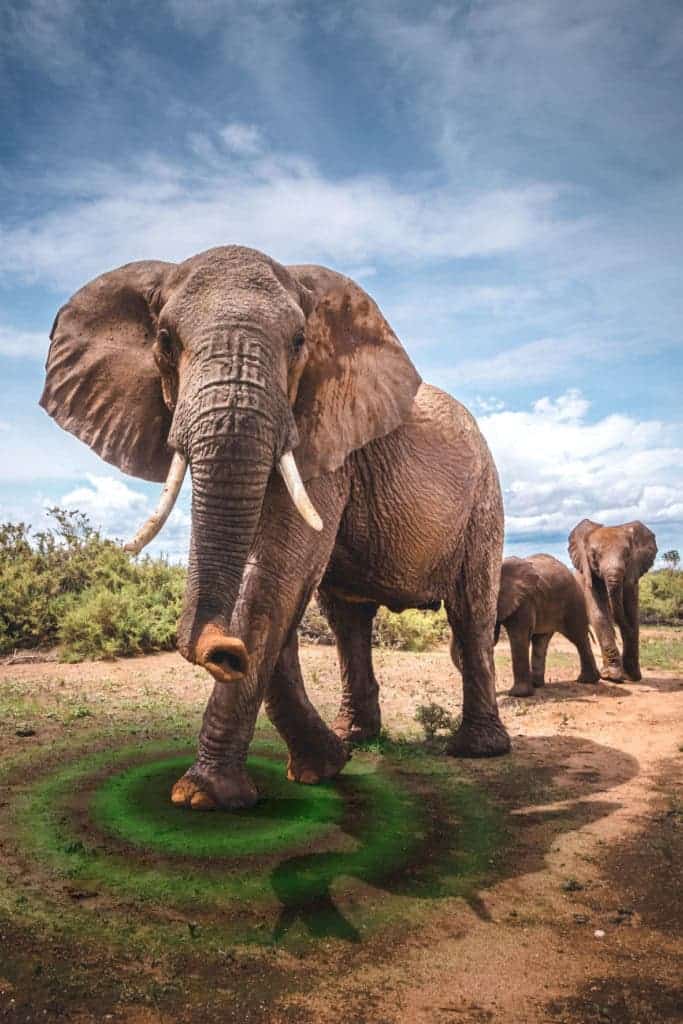 This image shows an African elephant with a visualization of the vibrations it generates, which can be used to determine its behavior. Image credits: Robbie Labanowski.

A story of elephants and earthquakes

As undergrads, we used to analyze open data from some seismographs in the city. Some were old and picked up a lot of noise and, on one of them, there was a strange wave that appeared every 10 minutes or so. It was too regular to be earthquake-related and, as it turns out, it was the local subway. Just like earthquakes, other things can generate waves that can be picked up by seismological equipment — in this case, it’s elephants.

In a new study, researchers describe how seismology could be used to track the movement of elephants, as well as their vocalizations.

The results seem to back the theory that elephants use ground vibrations for long-distance communications, but it’s surprising to see just how strong these vibrations really are.

“We were surprised by the size of the forces acting on the ground that were generated by elephants when they vocalize,” says Beth Mortimer of the Universities of Oxford and Bristol, UK. “We found that the forces generated through elephant calls were comparable to the forces generated by a fast elephant walk. This means that elephant calls can travel significant distances through the ground and, in favorable conditions, further than the distance that calls travel through the air.”

Mortimer focuses on animals that use vibrations to communicate between themselves — previously, she studied spiders and their webs but now, she’s moved to a bigger target. She believes that conservationists could ultimately design an alarm system using elephant-generated vibrations as a trigger.

Along with Will Rees, a Masters student, she recorded vibrations generated by wild elephants in Kenya while they displayed different behaviors, including walking and calling. They wanted to see how far elephant-generated vibrations travel and how they are affected by the terrain type and human noise.

They found that, under ideal conditions, the vibrations can be picked up from several kilometers away, but this varies greatly on the type of terrain and existing noise. A surprising result they gathered was that human noise can actually be very disruptive for the elephant calls — in other words, humans interfere with the elephants’ ability to communicate with each other over great distances.

But when the seismological receivers were close enough, they could be used to not only detect elephants, but also monitor their behavior and assess when they are threatened by poachers.

“We suggest that monitoring ground-based vibrations can be used in a practical context to not only detect elephants, but determine their behaviors,” Mortimer says. “Using multiple seismic recorders in remote locations, we suggest that detection, location, and classification algorithms can be generated that allow monitoring of elephants in real-time.”

However, before this can be realistically achieved, much more experimental data needs to be gathered and refined. Geophysicist Tarje Nissen-Meyer at the University of Oxford, UK, who was also involved in the study, wants to set up a larger, long-term network of seismic sensors. Along with aerial, visual, and acoustic surface sensors, a seismic network might also offer valuable information and alert park rangers when elephants are in trouble.

“We hope to build on these initial findings to develop a comprehensive approach for monitoring and understanding the behavior of large mammals in these pristine, changing, and fragile environments,” Nissen-Meyer says.

The study “Classifying elephant behaviour through seismic vibrations”, by Mortimer et al., has been published in Current Biology:  https://www.cell.com/current-biology/fulltext/S0960-9822(18)30420-2