NASA’s New Horizons shuttle wasn’t only taking mind blowing photos of Pluto, it was also peeking at Pluto’s moons, especially Charon – the largest one. The latest set of images analyzed by NASA researchers revealed quite a busy past, filled with violence and geologic activity. 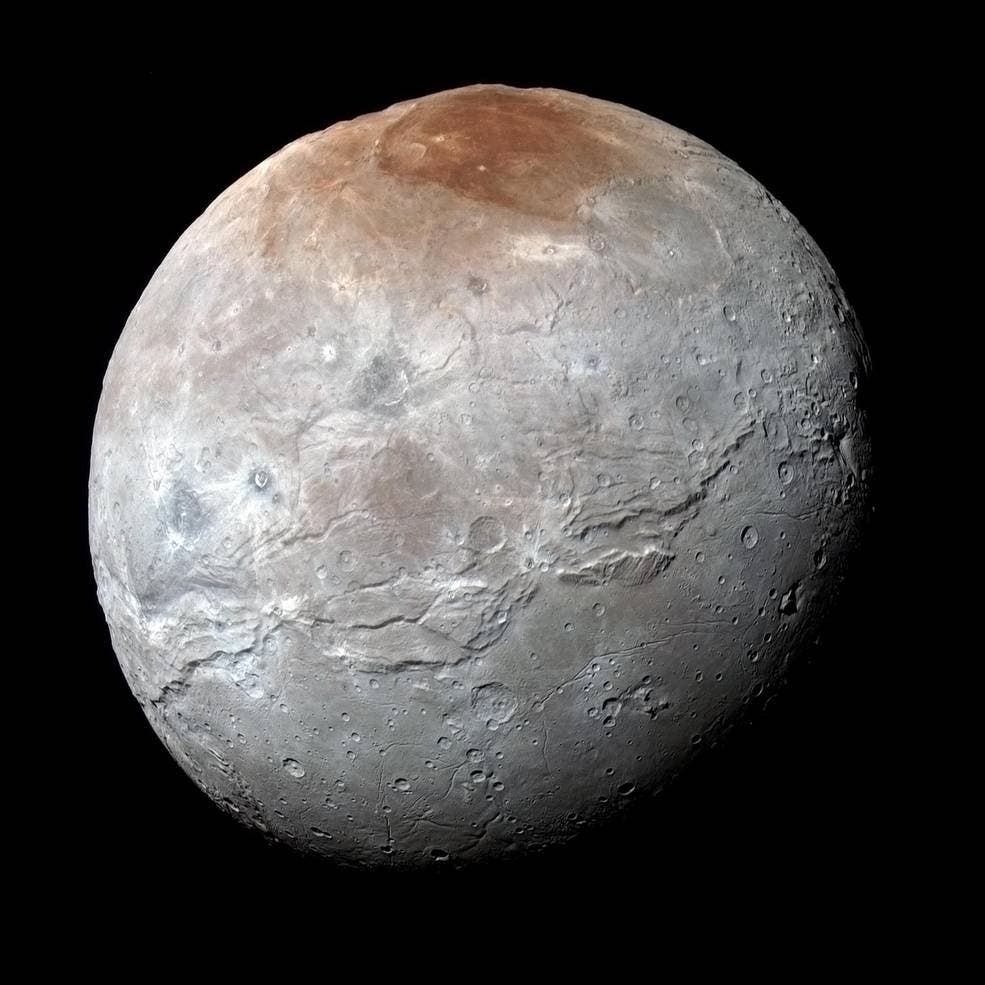 Charon in Enhanced Color NASA’s New Horizons captured this high-resolution enhanced color view of Charon just before closest approach on July 14, 2015. The image combines blue, red and infrared images taken by the spacecraft’s Ralph/Multispectral Visual Imaging Camera (MVIC); the colors are processed to best highlight the variation of surface properties across Charon. Charon’s color palette is not as diverse as Pluto’s; most striking is the reddish north (top) polar region, informally named Mordor Macula. Charon is 754 miles (1,214 kilometers) across; this image resolves details as small as 1.8 miles (2.9 kilometers).
Credits: NASA/JHUAPL/SwRI

Charon is the largest and best studied moon of Pluto. It is a very large moon in comparison to its parent body, Pluto, and some astronomers have argued that Charon itself should be considered a dwarf planet like Pluto, and not a moon. nlike Pluto’s surface, which is composed of nitrogen and methane ices, Charon’s surface appears to be dominated by the less volatile water ice. The south polar area is dominated by a very large dark area informally dubbed “Mordor” by the New Horizons team. Aside from Mordor, however, New Horizons imaged very few other impact craters on Charon and found a youthful surface, adding support to the above theory that Charon is geologically active and thus probably differentiated (meaning it has a crust, a mantle and a core).

“We thought the probability of seeing such interesting features on this satellite of a world at the far edge of our solar system was low,” said Ross Beyer, an affiliate of the New Horizons Geology, Geophysics and Imaging (GGI) team from the SETI Institute and NASA Ames Research Center in Mountain View, California, “but I couldn’t be more delighted with what we see.”

For starters, the features are incredibly visible – you can see craters, ridges, and even fractures on its surface, but the most spectacular feature is definitely a huge canyon. The canyon stretches more than 1,000 miles (1,600 kilometers) across the entire face of Charon and likely around onto Charon’s far side, four times larger than the Grand Canyon, indicating a huge geologic upheaval in Charon’s past.

“It looks like the entire crust of Charon has been split open,” said John Spencer, deputy lead for GGI at the Southwest Research Institute in Boulder, Colorado. “With respect to its size relative to Charon, this feature is much like the vast Valles Marineris canyon system on Mars.” 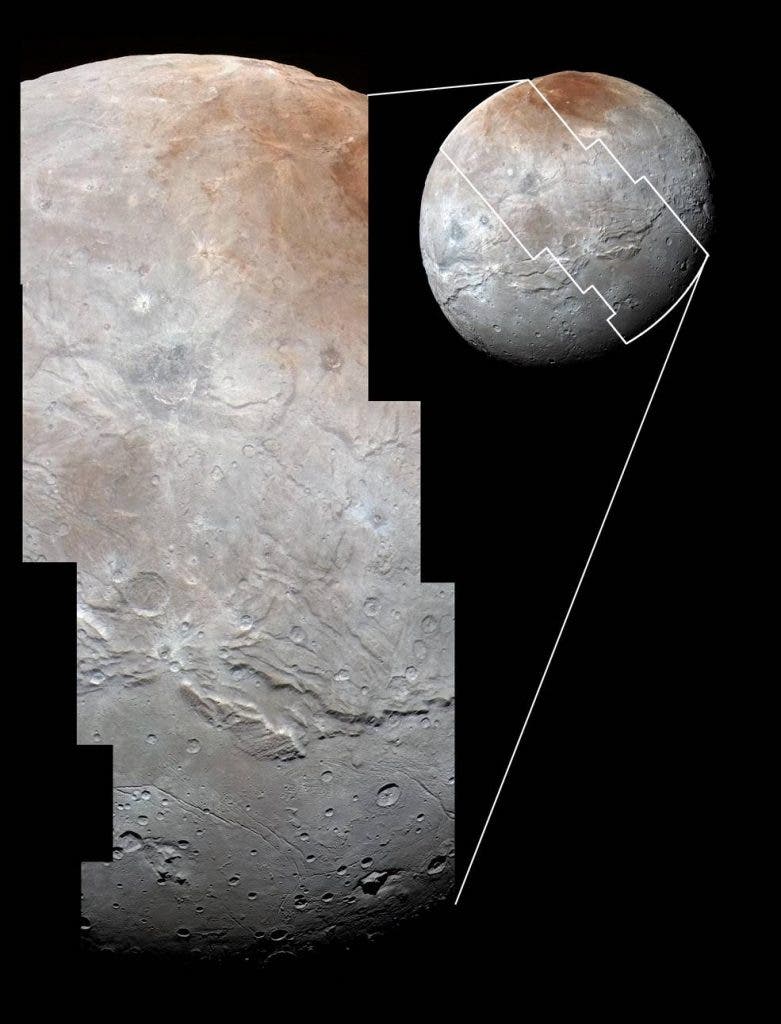 High-resolution images of Charon were taken by the Long Range Reconnaissance Imager on NASA’s New Horizons spacecraft, shortly before closest approach on July 14, 2015, and overlaid with enhanced color from the Ralph/Multispectral Visual Imaging Camera (MVIC). Charon’s cratered uplands at the top are broken by series of canyons, and replaced on the bottom by the rolling plains of the informally named Vulcan Planum. The scene covers Charon’s width of 754 miles (1,214 kilometers) and resolves details as small as 0.5 miles (0.8 kilometers).
Credits: NASA/JHUAPL/SwRI

They also found that the moon’s southern part has way fewer craters than the northern part. The smoothness of the plains, as well as their grooves and faint ridges, are clear signs of wide-scale resurfacing. This could be the effect of a kind of cold volcanic activity, called cryovolcanism.

“The team is discussing the possibility that an internal water ocean could have frozen long ago, and the resulting volume change could have led to Charon cracking open, allowing water-based lavas to reach the surface at that time,” said Paul Schenk, a New Horizons team member from the Lunar and Planetary Institute in Houston.

Right now, the existence (and extent) of geological features on Charon has taken both astronomers and geologists by surprise, but they couldn’t be more thrilled. The good news is that even more pictures of Charon are currently being sent by New Horizons, and some of them will come in even better resolution. We’ll keep you posted as that happens. 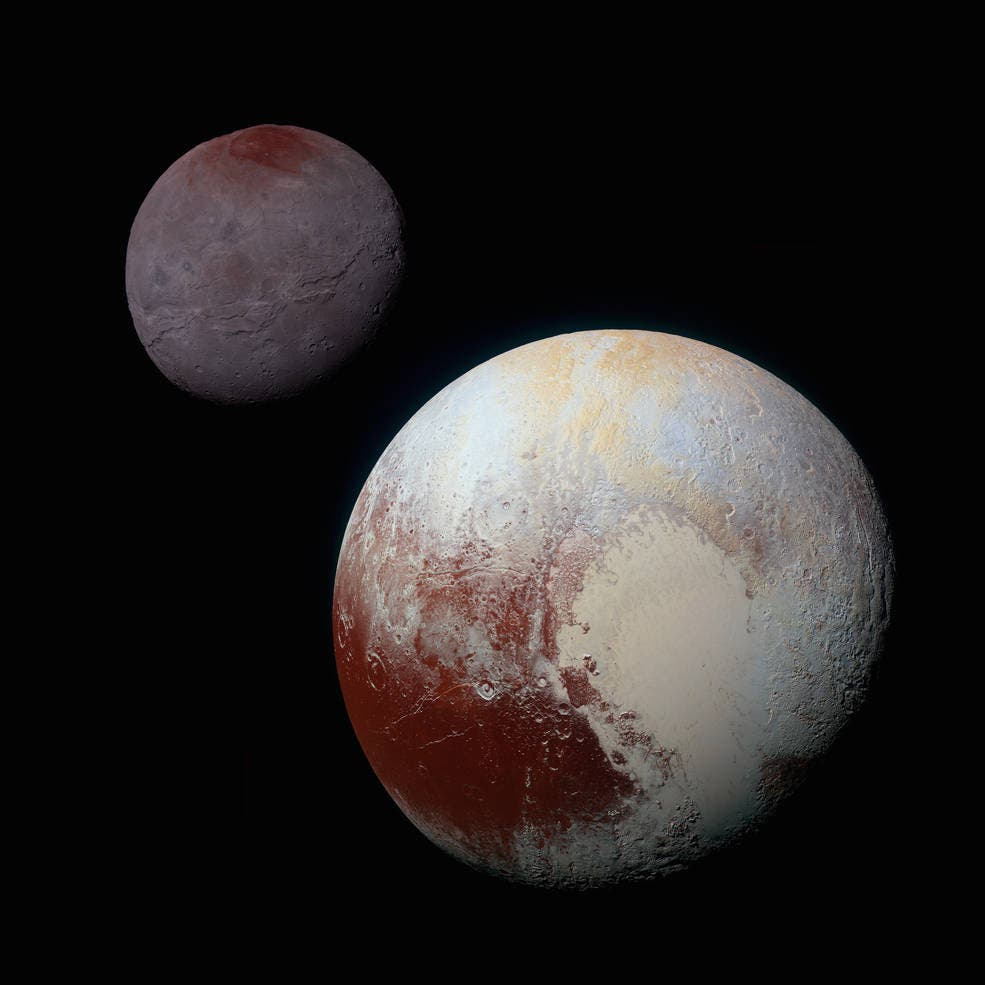 This composite of enhanced color images of Pluto (lower right) and Charon (upper left), was taken by NASA’s New Horizons spacecraft as it passed through the Pluto system on July 14, 2015. This image highlights the striking differences between Pluto and Charon. The color and brightness of both Pluto and Charon have been processed identically to allow direct comparison of their surface properties, and to highlight the similarity between Charon’s polar red terrain and Pluto’s equatorial red terrain. Pluto and Charon are shown with approximately correct relative sizes, but their true separation is not to scale. The image combines blue, red and infrared images taken by the spacecraft’s Ralph/Multispectral Visual Imaging Camera (MVIC).
Credits: NASA/JHUAPL/SwRI