Fossils of an elasmosaur, a rare type of plesiosaur were discovered in Alaska by Anchorage-based fossil collector Curvin Metzler. Researchers have confirmed this discovery and identified the species. 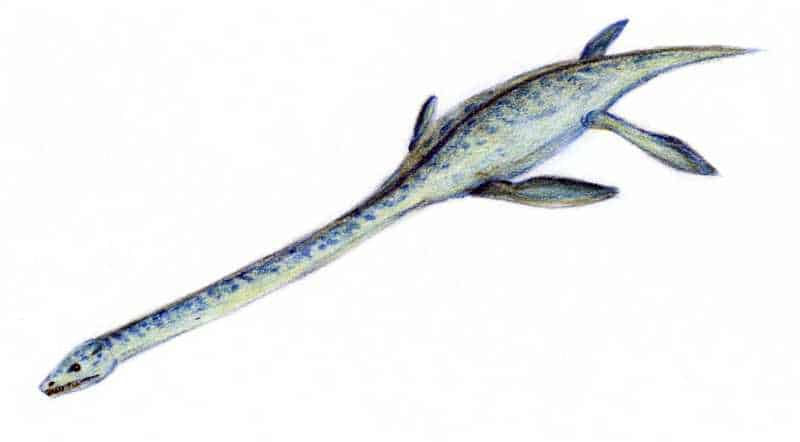 Artistic reconstruction of the Elasmosaurus. Image via Wikipedia.

Plesiosaurs were an order of marine reptiles that roamed the seas and oceans during the Mesozoic, from approximately 200 to 66 million years ago. Plesiosaurs had a broad flat body and a short tail, and they came in two morphological types: the “plesiosauromorph” build had extremely long necks and small heads. They were slow and hunted small marine creatures. Meanwhile, the “pliosauromorph” build with a short neck and a large head were much bigger and faster, basically on top of the food pyramid. Elasmosaurus belongs to the former group; it has a very long neck, reached 14 m (46 ft) in length and weighed over 2,000 kg (2.2 short tons), making it among the largest plesiosaurs.

“Picture the mythical Loch Ness monster and you have a pretty good idea what it looked like,” said Patrick Druckenmiller from the University of Alaska Museum of the North.

The species lived in the late Cretaceous, some 70 million years ago. It’s not the first plesiosaur found in the area, but it is the first elasmosaur reported in Alaska. Metzler has uncovered several interesting fossils in the area, which is quite spectacular for an amateur fossil hunter. He discovered the dinosaur bones as he was actually searching for something else. 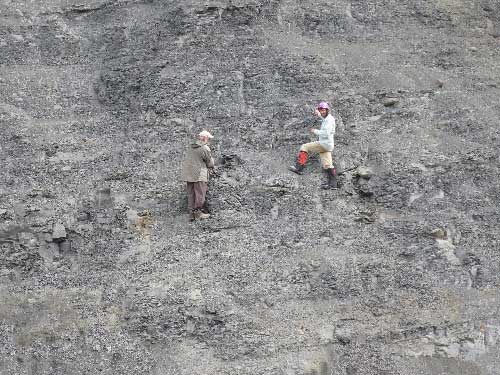 Curvin Metzler (left), who discovered the elasmosaur fossil, and UAMN earth sciences curator Patrick Druckenmiller examine the spot where bones were found sticking out of the cliff in the Talkeetna Mountains.
Photo by Pat Druckenmiller

“I’m mostly interested in finding invertebrates, so when I saw the first vertebra I knew it was a bone from something,” Metzler said. “I didn’t want to disturb anything in the cliff so it was exciting to talk to Pat [Druckenmiller]. We are lucky to have someone in the state who works with fossils.”

Druckenmiller is one of the foremost experts on marine reptiles, and he too appreciates this collaboration.

“I was really excited the first time Curvin showed me one of its bones,” he said. “I recognized it as a vertebra from the base of the animal’s neck and wanted to visit the site to see if we could find more. Based on the size of the bones we excavated, the animal should be at least 25 feet long.”