It’s called Pele’s hair, it looks like glass fiber and it comes from volcanoes – but bear with me, and all will make sense. 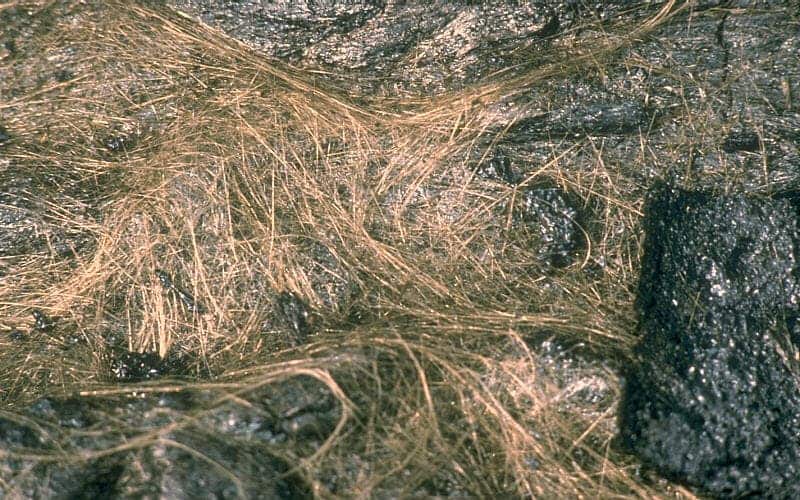 Named after Pele, the Hawaiian goddess of volcanoes, these thin threads are basically volcanic glass fibers. They require very specific conditions to form – when drops of lava are thrown up into the air and caught by the strong winds. The wind then stretches them out and thins them, creating the strands you can see here. These strands can vary in length from a few centimeters to over 2 meters.

They form most commonly during fire fountain activity. Hawaii’s volcanoes are known for their  spectacular jet-like sprays of liquid lava called fire fountains. These incandescent displays can eject lava to impressive heights, with one eruption at Kilauea spreading lava 580 m high in 1959; this type of eruption is ideal for creating Pele’s hair. Lava droplets cool and solidify very quickly, especially if they’re carried by the wind. But even so, if the winds are not strong enough, then all you’ll end up with are elongated small pebbles. In order for Pele’s hair to form, you need very strong winds to spin and strain the lava fast, before they manage to cool. The golden color comes from slight weathering effects.

Because one single droplet becomes so elongated, the resulting Pele’s hair is very light and brittle. In fact, if you ever happen to see it, it’s heavily recommended not to touch it, no matter how tempting it is. Aside from being very thin and brittle, they are also very sharp and broken pieces can enter your skin. 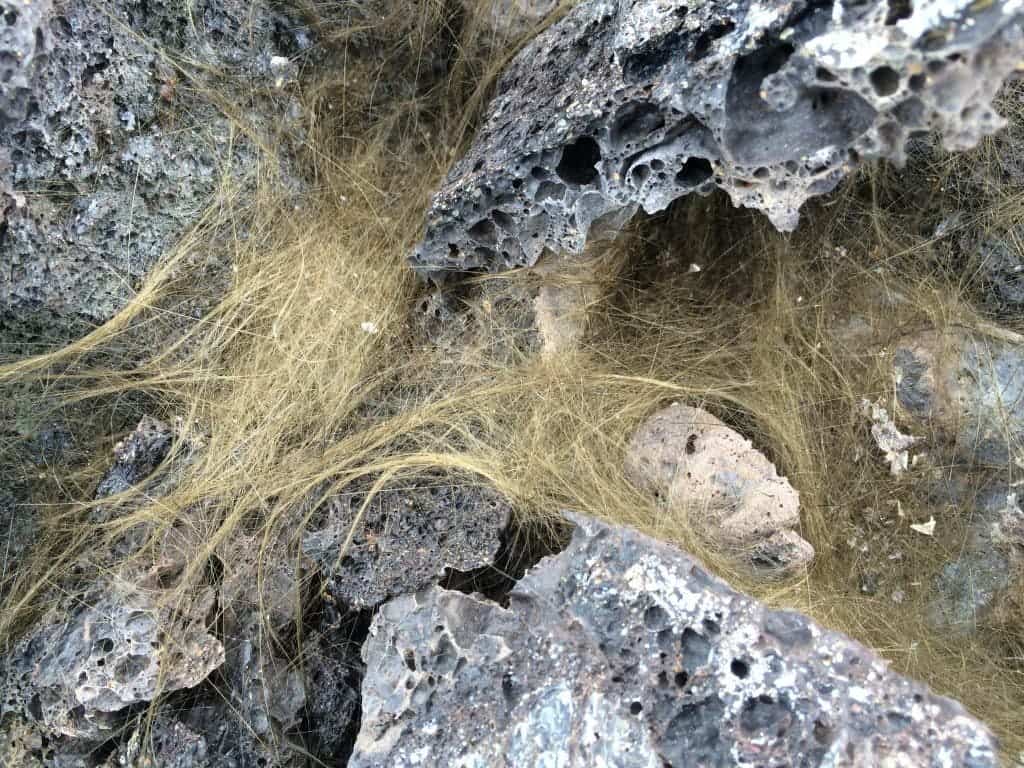 Pele’s hair
Greenish-gold strands of Pele’s hair form when bubbles in hot lava pop and throw droplets into the wind. They can be as thin as human hair, but don’t touch them – it can be dangerous.
Credit: NASA/GSFC/Andrea Jones
In June, five student journalists from Stony Brook University’s Alan Alda Center for Communicating Science packed their hiking boots and hydration packs and joined a NASA-funded science team for 10 days on the lava fields of Kilauea, an active Hawaiian volcano. Kilauea’s lava fields are an ideal place to test equipment designed for use on Earth’s moon or Mars, because volcanic activity shaped so much of those terrains. The trip was part of an interdisciplinary program called RIS4E – short for Remote, In Situ, and Synchrotron Studies for Science and Exploration – which is designed to prepare for future exploration of the moon, near-Earth asteroids and the moons of Mars.
To read reports from the RIS4E journalism students about their experiences in Hawaii, visit http://ReportingRIS4E.com

Pele’s hair, as well as Pele’s tears (the thicker ends of the strands) can tell geologists a lot about the volcanic eruption that created them. By analyzing the strands at special microscopes, geologists can estimate the eruption temperature, how the magma migrated to the surface and the mineral composition of the lava (to some extent). But it gets even better.

The shape of Pele’s tears can reveal the velocity of the eruption while the bubbles of gas and particles trapped within the tears can provide information about the composition of the magma chamber.

This is useful especially as Pele’s hair doesn’t only appear in Hawaii, but also in other, less studied areas. In theory, it can appear wherever there’s a volcanic eruption, but in practice, occurrences are quite limited, close to gaps or places where the small fibers can accumulate. The phenomenon has been reported in Nicaragua (Masaya), Italy (Etna) and Ethiopia (Erta’ Ale), as well as in Iceland, where it’s called “Nornahár,” or Witch’s Hair.

We’ve talked a lot about Pele, but who is her? Well, in Hawaiian mythology, Pele is the goddess of fire, lightning, wind and volcanoes. She was believed to have created the Hawaiian islands and is revered as a central figure in the mythology. True to the nature of a volcano, she is wise and powerful, but also jealous and subject to capriciousness. She manifests herself under many forms, and she is generally considered a negative harbinger.

She also punishes people who take away her hair and tears, which is another reason why you shouldn’t touch the strands. As the legend has it, she became jealous of Poliʻahu, the Hawaiian goddess of snow and started throwing fire at her. Running away, Poli’ahu threw away her now burning snow mantle over the mountain of Mauna Kea, resulting in huge earthquakes but ultimately cooling the lava and fire and sending Pele away, to Kilauea. Thus, snow reigns in the north of the island and fire in the south.

No matter how you look at it, whether it’s from a geological or mythological perspective, Pele’s hair is a unique and magnificent phenomenon – there’s nothing quite like it. The sheer thought that winds tear away lava drops hundreds of meters into the air and weave them into these long shapes is mind-bending. Our planet truly is a spectacular place, and by understanding just how special it is, we can appreciate it even more.