Researchers have discovered a new dinosaur species covered with feathers. Its wings were very short and it likely wouldn’t have been able to fly or glide, but the creature was on the cusp of evolving into a bird. It was also one of the ancestors of the velociraptors. 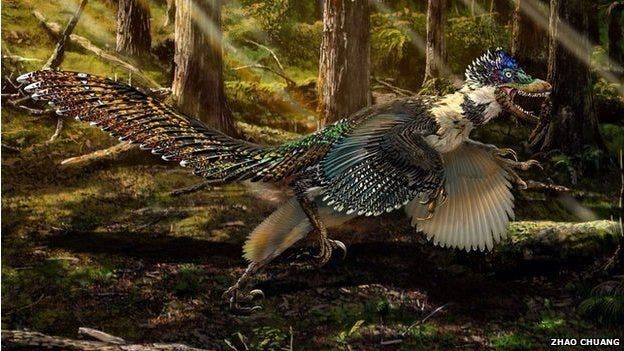 Some 125 million years ago, a 6 ft., 6 in (2 meter) long creature had the misfortune of being killed by a volcanic eruption. However, for paleontologists, this was quite fortunate, because it mean that the fossil was preserved extremely well on a piece of limestone – I couldn’t find exactly how exactly the fossil got embedded into the limestone (which of course, is not a volcanic rock).

The dinosaur is called “Zhenyuanlong,” meaning Zhenyuan’s dragon, after the man who found and retrieved the fossil. Lead researcher Dr Steve Brusatte said it was “the single most beautiful fossil I have had the privilege to work on”.

“It has short arms, and it is covered in feathers [with] proper wings with layers of quill-pen feathers,” he said.

Indeed, the fossil shows a complete skeleton, as well as its skull displayed in profile, with clearly visible features.

“The cool thing here is that it is a dinosaur that looks a lot like a bird,” Brusatte, a Scotland-based paleontologist who is one of the co-authors of the report, added. But the finding comes with many more questions. “This is the first time that we have wings found on a dinosaur this big with short arms. There’s no way it could fly,” Brusatte explained in an interview. “That raises a big mystery. Why did dinosaurs evolve wings?”

Dinosaurs with large feathers have been identified before, but none have possessed such complex wings made up of quill pen-like feathers. This likely means that the dinosaur was on the verge of an evolutionary breakthrough – it was on its way to become a bird. In fact, as the researchers put it, to humans, it would look just like a modern bird. 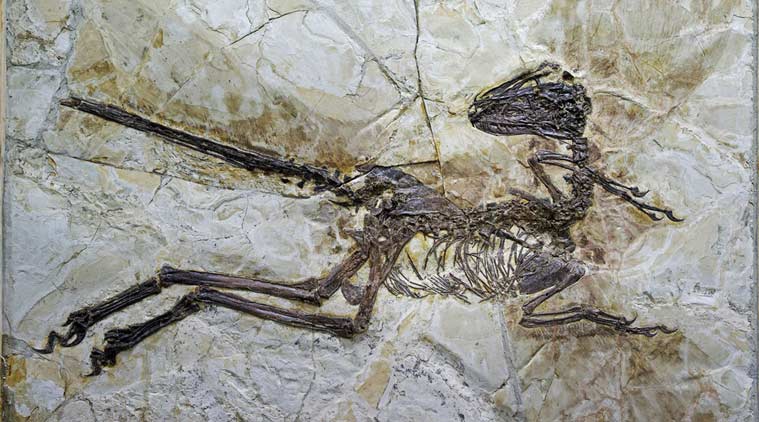 The picture released on Thursday July 16, 2015 is of the fossil of a new species of dinosaur named Zhenyuanlong suni. (Source: AP photo).

“So even though this is a dinosaur, even though it is a close relative of velociraptor, it looks exactly like a turkey or a vulture.”

But even though they couldn’t fly, dinosaurs still had good use for wings.

“It may be that such large wings comprised of multiple layers of feathers were useful for display purposes,” scientists wrote in Thursday’s issue of the journal Scientific Reports, where the discovery was announced. The wings might have also helped them glide over short distances or steer better.

So the Jurassic Park idea of a velociraptor that looked like a lizard got it all wrong – they were almost certainly more like birds than lizards. Despite a debate that lasted decades, most paleontologists agreed that many dinosaur species had some sort of feathers, but usually, they were simple filaments that looked more like hair than modern bird feathers. Finding the complete skeleton of a dinosaur that exhibits complex feathers is indeed remarkable; and if we were to look at an accurate Jurassic Park movie, it will almost certainly blow our minds – dinosaurs were not as we thought they were.

“It will blow some people’s minds to realise that those dinosaurs in the movies would have been even weirder, and I think even scarier – like big fluffy birds from hell.”

But this also raises the question: have we been looking at wings the wrong way all along? Perhaps wings didn’t evolve as a way to fly, but simply as display, or for protection. Whatever the truth is, it indicates that dinosaurs were even more complex and surprising than we believed.

“So maybe [wings] did not evolve for flight – perhaps they evolved as a display structure, or to protect eggs in the nest,” he said. Or maybe this animal was starting to move around in the trees and was able to glide.”

Also, the fact that this fossil was found in China comes as no surprise – China is definitely the hotspot of modern paleontology, with an immense number of understudied specimens just waiting to be found and studied. As Brusatte explains, the golden age of paleontology is now.

“There are [museum] storerooms full of new dinosaur fossils that have never been studied before. This is the most exciting time maybe in the history of palaeontology.”