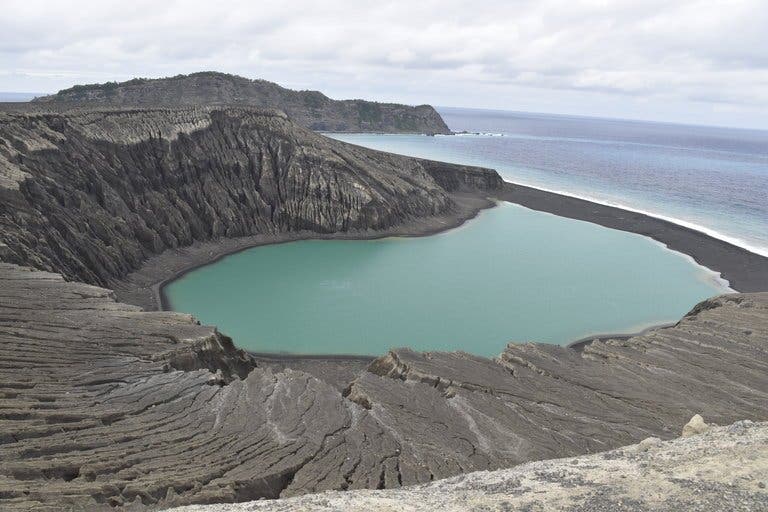 The crater lake from the summit rim at the center of Hunga Tonga-Hunga Ha’apai. Credit: NASA.

In the last days of 2014, something incredible happened — a whole new island was born, right before our eyes. For weeks, an underwater volcano that had been spewing ash and lava into the Pacific settled into a brand new island, rising 120 meters (400 feet) above the ocean’s surface. Geologists reckoned it wouldn’t be more than a couple of months before the island would succumb to erosion. Today, three years later, it’s still there. Scientists now estimate a far longer lifespan for the island of Hunga Tonga-Hunga Ha’apai, as it was unofficially christened, which could live on for six to 30 years. What’s more, its formation could lend valuable clues as to how similar underwater volcanoes erupted on Mars during its wet past, billions of years ago.

Most islands on Earth were formed by underwater volcano eruptions. The story of a volcanic island starts inside the planet. Earth has an inner core made of solid metal. It is thought to be as hot as the surface of the sun! A liquid outer core, also made of metals, surrounds the inner core. It is liquid because it is under less pressure than the inner core. Around the outer core is the Earth’s mantle. It’s made of hot rock called magma which is mostly solid,  but can flow like hot plastic. The last layer of the Earth, the crust, is where we live. It is the thin, outside layer of the Earth. The crust is made of pieces that fit together, like a jigsaw puzzle, called tectonic plates. Forces caused by Earth’s heat sometimes push them tighter against each other. Sometimes forces pull them apart. And sometimes there are weak spots in the crust. When plates pull apart or there is a weak spot, the mantle’s hot, flowing magma oozes out.

That’s how you get a volcano and these can be found all over Earth. Many of them are on land, but most volcanoes are actually found under the surface of the oceans. If an underwater volcano keeps erupting, it can rise above the ocean’s surface. An island is formed. Iceland formed millions of years ago from underwater volcanic eruptions, for instance.

Satellite-derived elevations of the island in April 2015 (left) and September 2017 (right). Credit: NASA. 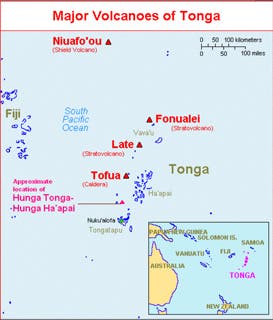 A map showing a large scale view of the South Pacific with the Kingdom of Tonga highlighted in purple. (Main map) Hunga Tonga and Hunga Ha’apai lie on the rim of a submarine caldera located 65 km N of a wharf in the harbor at Nuku’alofa, Tongatapu island (the main island of the archipelago). Credit: USGS.

Hunga Tonga Hunga Ha’apai rises about a mile above the deep ocean floor, making the water around the island shallow. At the recent American Geophysical Union, scientists at NASA’s Goddard Space Flight Center said that perhaps similar features existed around the Martian volcanoes. As such, Hunga Tonga Hunga Ha’apai might prove to be a perfect geological test tube that could help us understand better the water environment on early Mars.

“We see things that remind us of this kind of volcano at similar scales on Mars,” said Dr. Garvin, the chief scientist at NASA’s Goddard Space Flight Center in Greenbelt, Md. “And literally, there are thousands of them, in multiple regions.”

Since the new Tongan island formed, researchers have been closely studying satellite imagery, allowing them to generate detailed maps of the shifting topography. Such islands are usually short-lived, quickly succumbing to eroding waves. Hunga Tonga-Hunga Ha’apai was initially oval but then its southern shore eroded rapidly, creating a direct corridor for the Pacific Ocean to break into the lake at the center of the tiny island. It looked like the island was about to vanish. But then a sandbar formed which yet again sealed the lake, stabilizing the landscape.

Hunga Tonga-Hunga Ha’apai got lucky. When conditions are just right, warm water can cement volcanic ash into rock, and this may be what happened on the island. It’s only the third island in the last 150 years that has survived for more than a few months. According to their most recent study, Garvin and colleagues estimate the island could last for decades.

What the researchers plan on doing next is to connect time-lapse photography of the island with the erosional cycle at different depths. This way, they’ll have a sequence to look for on Mars. If the next rover catches a glimpse of some of these features on Mars, scientists could then infer how deep the water was there and for how long to do the same erosional work.