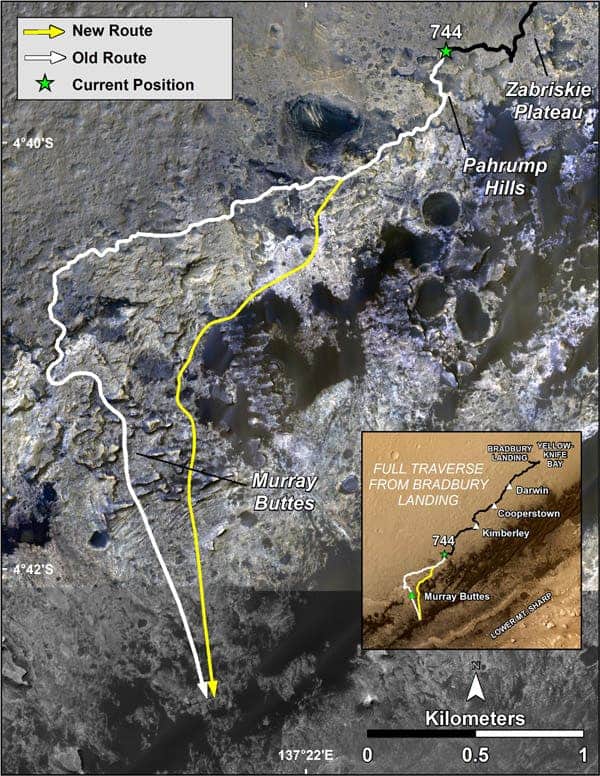 It’s been a while since we’ve talked about the Curiosity rover, but that doesn’t mean that it stopped studying the Red Planet. Now, NASA’s rover has reached one of its main destinations: Mars’ Mount Sharp, a Mount-Rainier-size mountain at the center of the vast Gale Crater and the rover mission’s long-term prime destination.

“Curiosity now will begin a new chapter from an already outstanding introduction to the world,” said Jim Green, director of NASA’s Planetary Science Division at NASA Headquarters in Washington. “After a historic and innovative landing along with its successful science discoveries, the scientific sequel is upon us.”

The journey to Mount Sharp was long and tenuous, but it was worth the wait. Curiosity will now focus on studying the lower slopes, in an attempt to understand more about the planet’s geology. The study will start on an outcrop called Pahrump Hills and divert from the initially planned route, as depicted above.

“It has been a long but historic journey to this Martian mountain,” said Curiosity Project Scientist John Grotzinger of the California Institute of Technology in Pasadena. “The nature of the terrain at Pahrump Hills and just beyond it is a better place than Murray Buttes to learn about the significance of this contact. The exposures at the contact are better due to greater topographic relief.”

The decision to change the initial route was made on previous results yielded by Curiosity. The rover was walking along the Murray Formation – a relatively soft 130 million year old geological formation; because it is so soft, it doesn’t preserve impact scars, which is one of Curiosity’s main points of focus. Geologists wanted to move it along a different path, which might provide more useful information. Also, one other issue was the wheel wear reported by the rover’s sensors. In late 2013, it was researching an area littered with hard, sharp rocks which were poking small holes in its wheels – since then, scientists have been constantly redirecting Curiosity’s path to help protect the wheels.

The Murray Formation. Image via NASA.

“The wheels issue contributed to taking the rover farther south sooner than planned, but it is not a factor in the science-driven decision to start ascending here rather than continuing to Murray Buttes first,” said Jennifer Trosper, Curiosity Deputy Project Manager at NASA’s Jet Propulsion Laboratory (JPL) in Pasadena, California. “We have been driving hard for many months to reach the entry point to Mount Sharp,” Trosper said. “Now that we’ve made it, we’ll be adjusting the operations style from a priority on driving to a priority on conducting the investigations needed at each layer of the mountain.”

Even with Curiosity’s amazing technology, there is only so much information you can gather with a remote controlled vehicle. NASA is currently starting to prepare a manned mission to the Mars, scheduled some time in the 2030s.