Just as the Moon is causing waters on Earth to go up and down (tides), so too does the Earth affect the Moon. Recently, researchers have found that our planet’s gravitational pull is having a deep effect on our satellite, opening new cracks and faults on its surface. 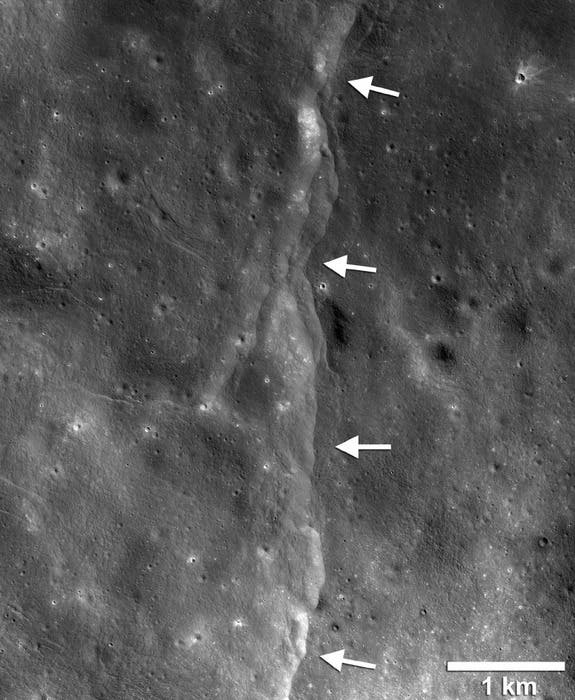 “We know the close relationship between the Earth and the moon goes back to their origins, but what a surprise [it was] to find the Earth is still helping to shape the moon,” study lead author Thomas Watters, a planetary scientist at the Smithsonian Institution’s National Air and Space Museum in Washington, D.C., told Space.

They analyzed data from NASA’s Lunar Reconnaissance Orbiter (LRO), which launched in 2009 – there’s an abundance of data from the LRO that is yet to be properly analyzed. They discovered 14 lobe-shaped fault scarps, or cliffs. These are among the most common geological features on the planet, likely forming as the hot interior cooled and contracted, causing the solid crust to crack.

However, if the only factor creating these cracks was the Moon’s interior cooling down, then you’d expect their orientation to be random; however, they are anything but random.

“It was a big surprise to find that the fault scarps don’t have random orientations,” Watters said. Instead, “there is a pattern in the orientations of the thousands of faults, and it suggests something else is influencing their formation, something that’s also acting on a global scale,” Watters said in a statement. “That something is the Earth’s gravitational pull.”

Basically, they found that most scarps are oriented where the Earth’s pull is the strongest. Many are lined up north to south at low and mid latitudes near the moon’s equator and east to west at high latitudes near the moon’s poles – either in the closest areas to the Earth, or the farthest ones away. When they created a model to take Earth’s gravity into account, it closely match the observed data.

“With LRO, we’ve been able to study the moon globally in detail not yet possible with any other body in the solar system beyond Earth, and the LRO data set enables us to tease out subtle but important processes that would otherwise remain hidden,” John Keller, LRO project scientist at NASA’s Goddard Space Flight Center in Greenbelt, Maryland, said in a different statement.

It’s quite possible that these cracks are active right now, opening from time to time due to the Earth’s attraction. If this is the case, then there are likely “moonquakes”, which a network of seismometers could one day pick up.