Sampling impact glass from the ancient craters that litter the surface for Mars might prove key to settling a long debate: did Mars ever harbor life? Researchers at NASA believe this is a great lead after the Mars Reconnaissance Orbiter (MRO) currently hovering above the red planet found deposits of glass. These were formed by impacts with large asteroids, whose blast trapped and preserved any matter it came across: dust, soil or any plants or bacteria (if there ever were such things). Cracking open these glass time capsules and peering inside could, thus, be one of the best places to look for.

Previously, a paper published in 2014 by Peter Schultz, a geologist at Brown University, found flora preserved in impact craters here on Earth. This got Kevin Cannon and Jack Mustard, both of the MRO mission, really excited. If this happened on Earth, then it ought to on Mars as well. If the barren wasteland we know today ever fostered life, then impact glass should have recorded that.

Using data from the orbiter, Cannon and Mustard showed that impact glass can be found throughout various craters on Mars. One of the craters in question is the Nili Fossae, a depression around 650 km long and one of the possible landing sites for NASA’s Mars 2020 rover. Curiosity, while apt for sampling impact glass, is too far away from any such site to visit.

“The work done by Pete and others showed us that glasses are potentially important for preserving biosignatures,” Cannon said. “Knowing that, we wanted to go look for them on Mars and that’s what we did here. Before this paper, no one had been able to definitively detect them on the surface.” 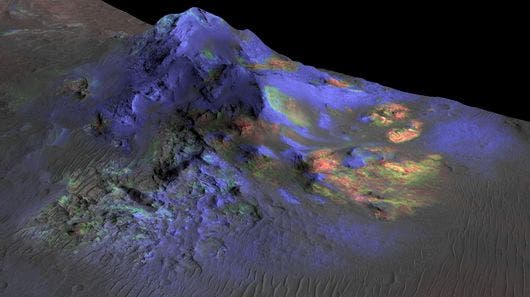 An impact glass deposit discovered at the Alga Crater. Credit: NASA/JPL-Caltech/JHUAPL/Univ. of Arizona)

To find the craters, the researchers first had to find the signature spectrum for Martian impact glass so it could be detected from thousands of miles above. The researchers placed Martian rock substitute in a kiln, then burned it with a lot of energy to simulate the kind of blast you’d see in cosmic impact. The resulting glass substance was then analyzed and its spectral qualities recorded. It was smooth sailing from there on. Just a matter of matching data, as reported in the journal Geology.

So, a lot sooner than many of you might have expected, a robotic probe could beam back the news of the century – “Mars once had life” or “Here’s what alien life looked like.” Or we might not find anything, which isn’t that absurd. The current leading consensus seems to be that Mars was once covered with vast bodies of waters: oceans, sea and rivers. In fact, scientists have been proposing this for more than a century ever since the first men observed water-carved channels with rudimentary telescopes. Nowadays, some models claim  that 3 to 4 billion years ago Mars was warm, wet and Earth-like. But there’s another school of thought that claims Mars was a frigid, icy planet during the same period. 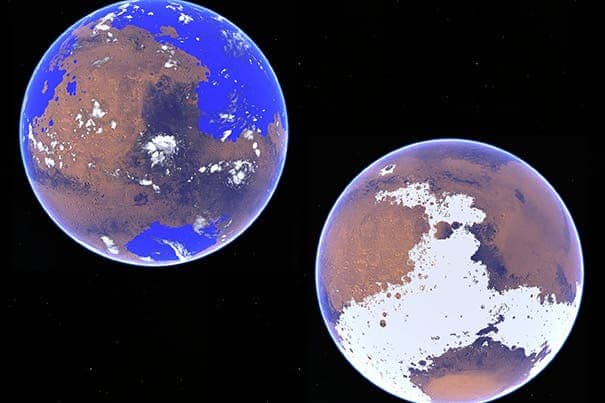 Harvard researchers used a 3-D atmospheric circulation model to compare a water cycle on Mars under different scenarios 3 to 4 billion years ago. The left rendering looks at Mars as a warm and wet planet and the other as a cold and icy world. Image courtesy of Harvard John A. Paulson School of Engineering and Applied Sciences

A paper also published today details how a team at Harvard John A. Paulson School of Engineering and Applied Sciences compared these two models. One scenario looked at Mars as a warm and wet planet with an average global temperature of 10 degrees Celsius (50 Fahrenheit), and the other as a cold and icy world with an average global temperature of minus 48 degrees Celsius (minus 54 Fahrenheit). The study’s authors found that the cold scenario was likelier to have occurred than the warm one, based on what is known about the history of the sun and the tilt of Mars’ axis long ago. At those kinds of temperatures, you can say bye-bye to any chance of life, but this far from a settled issue. After all, we’re talking about peering into the climatic and geological history of an alien planet without traditional tools: sampling rocks and minerals (a lot of them, not dust clumsily gathered by some robot on wheels).