First and foremost, Earth owes its paradisiac condition to the powerful magnetic field that shields it from harmful radiation. Without this convenient field generated by a magnetic dipole there would be no plants, no bacteria, no humans — we’d be just like Mars. But it hasn’t always been this simple and stable. A new research suggests the planet went through periods of chaotic shifts in the magnetic field which lasted hundreds of millions of years. At times, more than two poles were active generating multiple, weaker magnetic fields than the one enveloping Earth today. 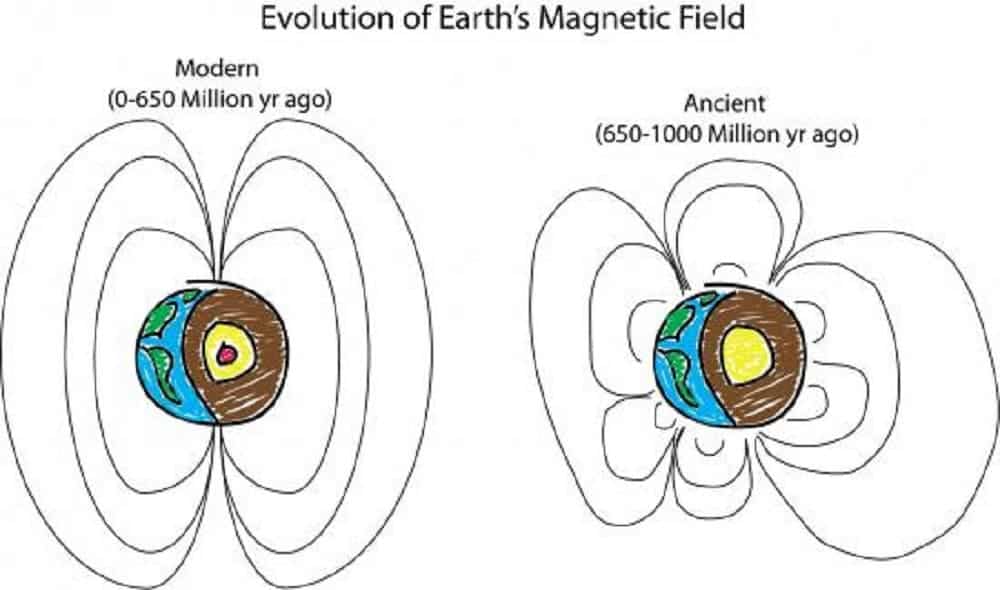 The earth’s core acts like a geomagnetic dynamo. The solid inner part is constantly exchanging heat with the iron outer core, keeping it in a state of liquid motion. But the inner core was not always solid. It went through a strange period between 1 billion and 500 million years ago in which it was in a liquid state, and only began solidifying some 650 million years ago.

Peter Driscoll, a scientist at the department of terrestrial magnetism at the Carnegie Institution of Washington, was among the team of researchers who made simulations and models of Earth’s geomagnetic dynamo based on geological findings that revealed the planet’s thermal past.

“What I found was a surprising amount of variability,” Driscoll said. “These new models do not support the assumption of a stable dipole field at all times, contrary to what we’d previously believed.”

For instance, simulations suggest Earth had a dipole magnetic field one billion years ago but then transitioned to multiple poles positioned across the planet which generated weaker magnetic fields up to 650 million years ago. During this time, life may have been in a lot of trouble as it sought to adapt to varying magnetic conditions.

The implications are numerous. For one, it could change how scientists study the planet’s continental plates and ancient climate, both heavily influenced by the magnetic field.

“These findings could offer an explanation for the bizarre fluctuations in magnetic field direction seen in the geologic record around 600 to 700 million years ago,” Driscoll added. “And there are widespread implications for such dramatic field changes.”

These predictions are not the final word, though. Once these models are compared to magnetized rocks, we might be able to reach a more accurate picture.

The findings were published in the journal Geophysical Letters.