Dr Nick Longrich from Bath University was studying bones from two horned dinosaurs from the ceratopsian family (related to Triceratops), when he discovered that the two were actually previously unknown species. The findings highlight that dinosaurs in area were more diverse than previously thought, and they also show that sometimes, museum archives can yield surprising information. 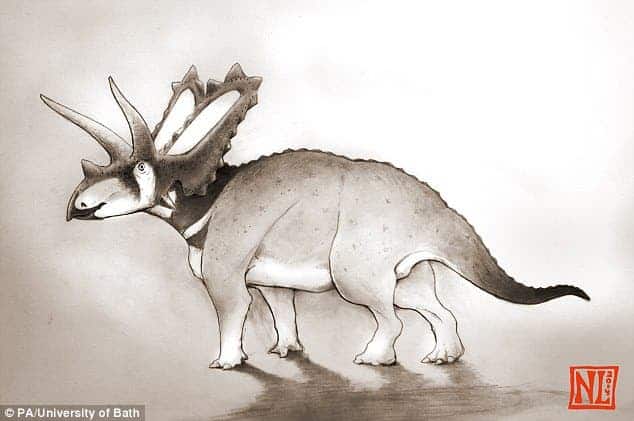 “We thought we had discovered most of the species, but it seems there are many undiscovered dinosaurs left,” said Dr Nick Longrich from the University’s Department of Biology & Biochemistry. “There are lots of species out there. We’ve really only just scratched the surface.”

Ceratopsians were a group of herbivorous, beaked dinosaurs with elaborate facial horns and frills extending over the neck. The horns and frills served as a defense mechanism protecting the neck, but some paleontologists believed they also played a role in thermoregulation and display. Ceratopsians ranged in size from 1 meter (3 ft) and 23 kilograms (50 lb) to over 9 meters (30 ft) and 5,400 kg (12,000 lb). The most famous member of the family is Triceratops – who was very common in some parts of today’s America. Forty-seven complete or partial skulls were discovered in just that area during the decade 2000–2010.  Paleontologist John Scannella, not involved in this study observed:

“It is hard to walk out into the Hell Creek Formation and not stumble upon a Triceratops weathering out of a hillside.” 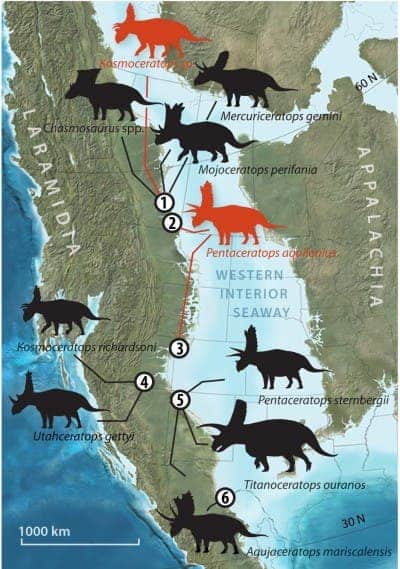 But some ceratopsians are more elusive – like the two species discovered by Longrich. The first one, Pentaceratops aquilonius is a smaller cousin of Triceratops with long brow horns, member of the chasmosaur family. About as big as a buffalo, it roamed the plains of today’s western North America 75 million years ago, during the Cretaceous period. The other species represents a new species of Kosmoceratops. There is still some doubt whether or not it is a new species – new fossils would likely settle this case for good.

What we call today North America, especially in its western parts, hosted a great diversity of dinosaurs during the Cretaceous. The Cretaceous was a period with a relatively warm climate, with high sea levels and very gentle temperature gradient from the equator to the poles. Sediments showed that temperatures were higher than they are today.

Especially remarkable is the ceratopsian population in the area. Up until now, ten chasmosaur species have been recognized there alone, with different species in southern and eastern areas. Longrich proposes that distinct northern and southern provinces existed during the Campanian, but that there was exchange between them. Dinosaurs would move from one place to the other, and following different environmental pressures, they would then diverge to form new species. Longrich added:

“The distribution of dinosaur species was very different from the patterns seen in living mammals. In living mammals, there tend to be relatively few large species, and they have large ranges. With Cretaceous dinosaurs, we see a lot of large species in a single habitat. They also tend to be very regional – as you move from one habitat to another, you get a completely different set of species.”

This explains why paleontologists keep finding new species – and will likely find even more in the future. Longrich believes dinosaur biology may also play a key role in this.

“In this sense dinosaur biology seems quite different from mammal biology. It could be that mammals are more intelligent and so they tend to have more flexible behaviour, and adapt their behaviour to their habitats. On the other hand, dinosaurs may have had to adapt themselves physically to survive in a different habitat, and evolved new species. Perhaps that’s the reason why there are so many species.”

To me, this shows once again that many valuable findings still lie in museums, forgotten – or waiting to be discovered. I applaud the patience and inspiration of looking through old archives; sometimes, the results can be remarkable.

Via University of Bath.