Hydro-energy is clean, cheap and reliable – in many ways, it’s every man’s dream: you get the reliability of fossil fuels with the eco-friendliness of wind and solar. But hydro also comes at a price, one that we are only recently discovering: it threatens biodiversity and encourages erosion. 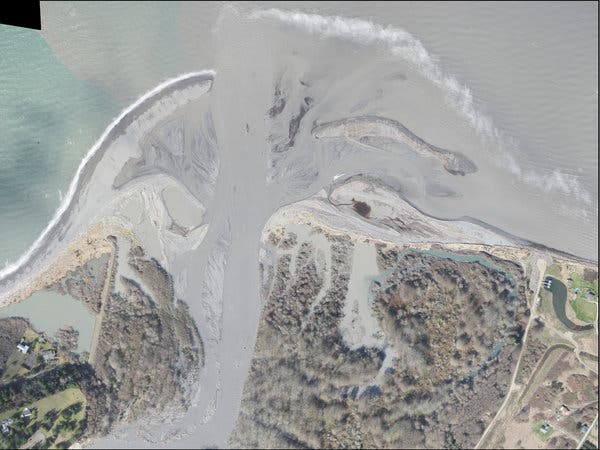 The mouth of the Elwha River in Washington in March 2014 as the dam removal project sent sediment its way.
ANDY RITCHIE / NATIONAL PARK SERVICE

The removal of a dam on the Elwha River in northern Washington State – the largest such project in the United States – highlights the benefits that emerge after dams are taken down.

“We are seeing the rebuilding of an estuary and coast that were rapidly eroding prior to dam removal,” said Jonathan Warrick, a scientist at the geological survey and the lead author of a paper synthesizing the research, one of five on the project published in a recent issue of the journal Geomorphology.

The Elwha River is a 45-mile (72 km) river on the Olympic Peninsula in the U.S. state of Washington. Most of the river is in Olympic National Park. The removal of the Elwha and Glines Canyon dams, which was begun in 2011, just finished last summer, and researchers from the United States Geological Survey, the National Park Service, the Lower Elwha Klallam Tribe and other organizations and agencies have been monitoring the site to see how it develops. So far, the results are spectacular.
Millions of cubic meters of sediment had accumulated behind the dams, and erosion started kicking in. After the dams were removed, the sediment began moving towards the river’s mouth, and as Warrick explained, reversed the erosion. In the first two years of the project, Guy Gelfenbaum of the U.S.G.S. wrote that 2 million cubic meters had accumulated in the river delta. The beaches, which were starved of materials, have started expanding again, and since then, an additional 1.5 million cubic meters have also reached the river’s mouth, Warrick said. It’s astonishing, and it’s only starting. 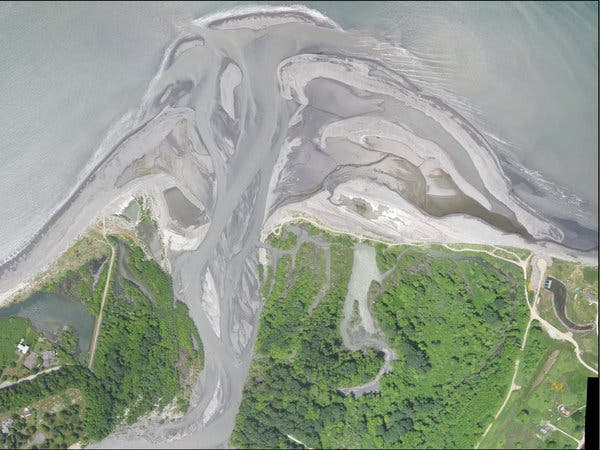 The mouth of the Elwha in June 2014 showing the extent of the changes.
ANDY RITCHIE / NATIONAL PARK SERVICE

“Walking on this new land form that extends hundreds of meters toward the sea and changes every day — it’s fantastic,” he said. “It blows your mind.”

The wildlife is also savoring the change. Reservoir water is usually more stagnant than normal river water, encouraging the development of algae which can suffocate the fish. In addition, reservoir water is typically low in dissolved oxygen and colder than normal river water. Studies have shown that migratory species like salmon respond quickly to improved conditions once a dam is removed.

“The salmon have been coming back,” Dr. Warrick said. “They are spawning in portions of the river where they have not been for 100 years. And their numbers have increased a bit, too.”

One thought on “When dams go down, the beaches and the fish win”