Fishing now extends to over half the ocean surface on Earth, a new study shows — and some areas are surprisingly busy. 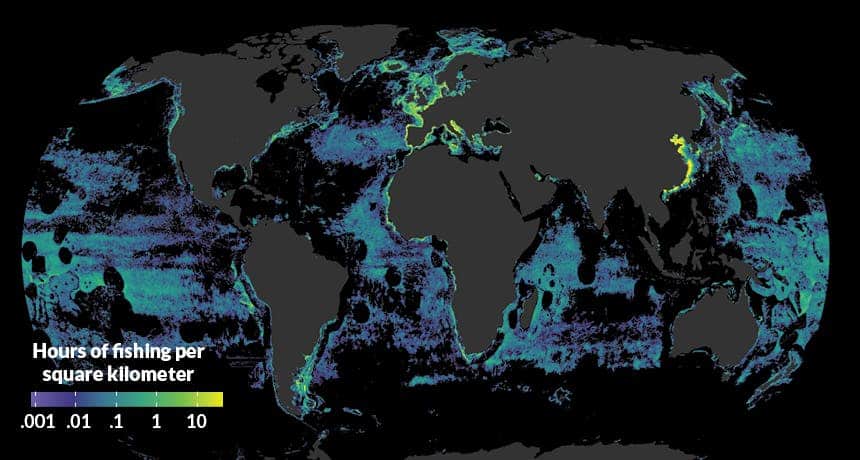 Oceans cover more than two thirds of our planet’s surface, which is why we affectionately call it the Blue Planet. It might be time for us to seriously consider changing that name to the Fishing Planet, as industrial fishing occurred across more than 55% of overall ocean area in 2016, new research has found.

To put that into perspective, only 34% of the planet’s land area was used for agriculture or grazing in 2016.

Previous attempts at tracking and quantifying global fishing activity haven’t been very successful, mostly because of the data they worked with — a mess of data drawn from electronic monitoring systems on some vessels, logbooks, or even onboard observers on others.

Over the last 15 years, however, almost all commercial-size ships have been outfitted with AIS, or automatic identification system, transceivers. These instruments track the ship in real time and are meant to help ships avoid collisions at sea. The team drew on this cache of data for their study. They examined 22 billion AIS positions, recorded between 2012 and 2016. Using machine learning, they identified over 70,000 fishing ships based on these positions and then recorded their activity.

Most fishing, they report, took place in countries’ exclusive economic zones (EEZs), which isn’t that surprising. EEZs are ocean regions roughly within 370 kilometers of a nation’s coastline, within which the UN Convention on the Law of the Sea grants states special rights to explore for and exploit marine resources.

However, there were also hotspots of fishing activity further out in the open ocean, the team adds. Such spots included the Northeastern Atlantic Ocean and the areas of nutrient-rich upwellings off the coasts of South America and West Africa. Just five countries — China, Japan, Taiwan, Spain, and South Korea — accounted for roughly 85% of all fishing outside of any EEZ.

Tracking fishing efforts over space and time can help guide policy on the matter, to make sure fish stocks are harvested in a sustainable manner. The data can also help tailor marine environmental protections and international conservation efforts for fish, which are having a really hard time surviving. In the face of rising sea levels, and an increase in human activity at sea, both of these tasks could become central talking points in geopolitics, and would have a direct impact over consumer quality of life.

The paper “Tracking the global footprint of fisheries” has been published in the journal Science.