On this date, 65 years ago, the double-helix structure of DNA was discovered. The two Cambridge University scientists, James D. Watson and Francis H.C. Crick, announced that they had figured out the structure of DNA, the molecule that contains human genes. They put together the pieces of knowledge that had been assembled and had important collaborators who provided experimental results.

Paving the way to discovery

There was a lot of research and build-up to this discovery. DNA, deoxyribonucleic acid, was first discovered in 1869 by the Swiss physician Friedrich Miescher. He investigated the proteins in leucocytes, and during his work, he found a substance that was not a protein. He performed a crude extraction of the substance and named it “nuclein” due to its presence in the nuclei of the cells. The current name for it is a nucleic acid. 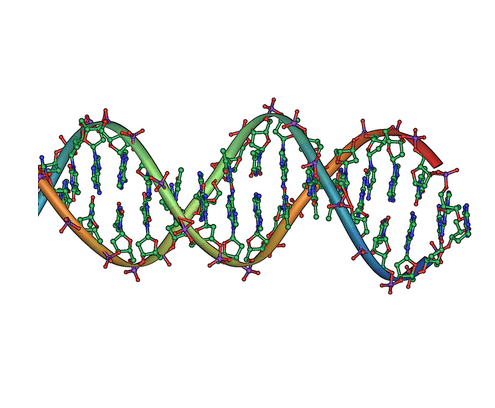 Around the same time, Gregor Mendel, the Czech monk, was performing experiments on peas that demonstrated that certain traits can be inherited. However, these two pieces of the puzzle were not put together until 1944 when the American scientist Oswald Avery transferred the nucleic acid from one pathogenic bacterium to a harmless bacterium. The previously harmless bacteria now passed on the ability to cause disease to the next generation. Therefore, the link between inheritance and nucleic acid was established.

Putting the pieces together

As you can imagine, many other researchers were working to uncover the fundamental molecule of inheritance. Another researcher, a chemist from California called Linus Pauling, suggested a triple helix model at the beginning of 1953. Watson and Crick were racing with him to be the first to discover the true form of DNA. 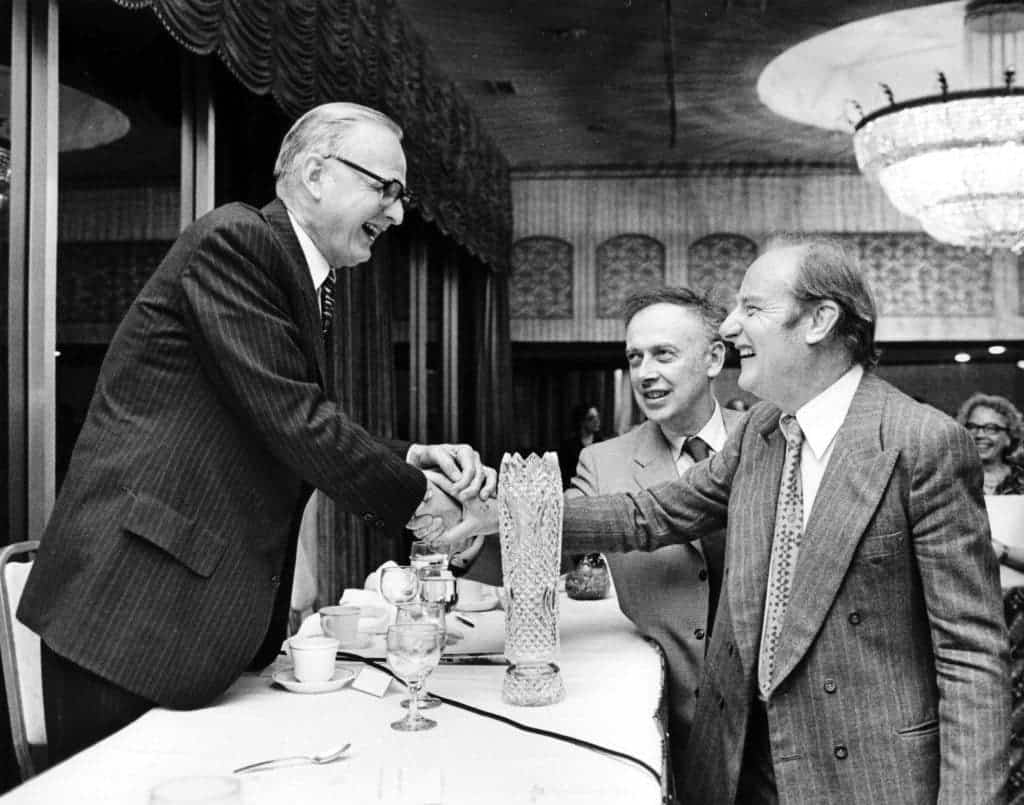 Crick and Watson on the right. Image credits: Marjorie McCarty.

Watson and Crick did the theoretical work, making ball and stick models and interpreting experimental results. They collaborated with Maurice Wilkins and his collaborator, Rosalind Franklin, who did experimental work. The experimental results involved X-ray diffraction. The principle behind this method is that shining X-rays on DNA can form crystals if treated a certain way. The rays then bounce off of the sample, creating patterns on photographic film that can then be analyzed for the structure.

Watson figured out the pairing of the bases from Chargoff’s work and on February 21st, 1953, he had a breakthrough when he saw that the adenine-thymine bond was the same length as the cytosine-guanine bond. This meant that each level in the DNA helix would be the same length and the phosphate backbone would be smooth. 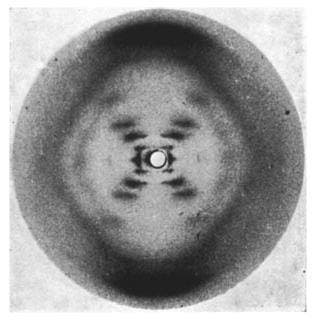 Photograph 51 provided crucial information to deduce the structure of DNA. The famous photograph was taken by Raymond Gosling, a PhD student under the supervision of Rosalind Franklin at King’s College London, in May 1952. The DNA had been crystallized under moist conditions and the picture shows a fuzzy “X” which may not mean much to the untrained eye, but is indicative of a double helical structure with anti-parallel strands. Watson and Crick were able to deduce that the outside of the DNA chain has a backbone of alternating deoxyribose and phosphate molecules, and the base pairs are inside the helix. Their calculations from the photos produced important parameters for the size and structure of the helix. There is controversy regarding this photo as Maurice Wilkins showed it to Watson and Crick without Rosalind Franklin’s approval or even knowledge.

The double-helical structure also made a lot of sense because it offered a mechanism for DNA replication. The helix structure allows DNA to replicate by separating into one strand and becoming the template for a new helix.

Watson and Crick had their “Eureka moment” on the morning of February 28th. They had successfully put together all of the pieces of information to come to the double-helical structure of DNA. In his autobiography, Watson wrote that, after their realization, Crick walked into a nearby pub and announced that “we had found the secret of life”. 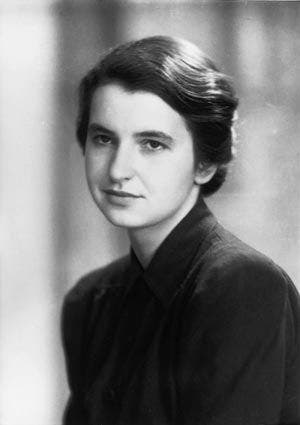 Rosalind Franklin. Image credits: A Other.

Watson and Crick published their discovery formally on April 25, 1953 in Nature magazine. Watson was only 25 years old at this point, though Crick was 12 years his senior. The modest page-long article began with the understatement of the century: “This structure has novel features which are of considerable biological interest.” They were “stimulated by a knowledge of the general nature of the unpublished experimental results and ideas” of Wilkins and Franklin, as they stated in their acknowledgements.

Crick, Watson, and Wilkins were awarded the Nobel Prize in 1962. Franklin died four years prior of ovarian cancer and therefore was ineligible for the award, as they are not awarded posthumously. Watson has said that she should have shared the prize with them.

Sixty-five years is not a long time to know about the structure of DNA– it has been a fundamental discovery that has revolutionized healthcare, research, agriculture, and much more!