A new shape-shifting drone promises to offer rescue teams robotic help even in those hard-to-reach areas. 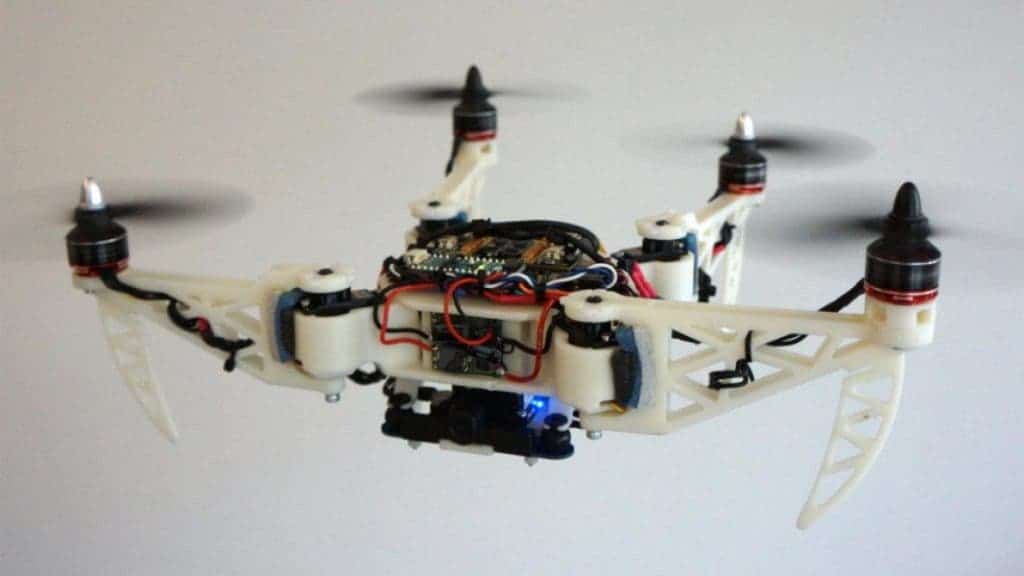 The drone in it’s T-shape configuration (more on that later).
Image credits UZH.

Teams digging through collapsed or damaged buildings are often the only chance of salvation for those trapped after fires, earthquakes, or similar events. It’s obviously dangerous and laborious work. Not only are such structures very unstable, but they’re usually also very hard to navigate (on account of all the fallen rubble).

Needless to say, having drones scour collapsed buildings ahead of human teams would be the safest course of action. However, drones would often have to enter such sites through narrow points — a crack in a wall, a partially open window, through bars — something the typical size of a drone does not allow. A team of researchers from the Robotics and Perception Group at the University of Zurich and the Laboratory of Intelligent Systems at the Lausanne Federal Polytechnic School (EPFL) plans to address this issue.

The little drone that folded

“Our solution is quite simple from a mechanical point of view, but it is very versatile and very autonomous, with onboard perception and control systems,” explains Davide Falanga, researcher at the University of Zurich and the paper’s first author.

The drone’s most obvious advantage over counterparts is its ability to morph in shape to tackle cramped environments. and guarantee a stable flight at all times. The team says they’ve drawn inspiration from birds that fold their wings mid-air to navigate narrow passages. In a very similar fashion, the drone can squeeze itself to pass through gaps and then go back to its previous shape while flying. The drone can also transport objects, including during this morphing process.

Both teams collaborated closely to design the drone — a quadrotor with four propellers that rotate independently, each mounted on mobile arms outfitted with servo-motors that can fold around the frame. It also sports a video camera. What really keeps the drone aloft during these foldings is a control system designed and programmed by the team. It keeps tabs on each propeller’s position in real time, adjusting their thrust as the drone weaves and bobs through the air.

The drone’s standard configuration is the traditional quadcopter X-shape (like these drones here), with the four arms stretched out and the propellers at the widest possible distance from each other. When faced with a narrow passage, the drone can morph into an H-shape, with all arms lined up along one axis. It can also take on an O-shape (with all arms folded as close as possible to the body) or a T-shape, which can be used to bring the onboard camera as close as possible to objects that the drone needs to inspect.

“The morphing drone can adopt different configurations according to what is needed in the field,” adds Stefano Mintchev, co-author and researcher at EPFL.

The researchers plan to further improve the structure of their drone so that it can fold in all three dimensions. They also want to develop software that will make the drone truly autonomous, so it can find its own way through rubble and collapsed buildings in real-life scenarios. “The final goal is to give the drone a high-level instruction such as ‘enter that building, inspect every room and come back’ and let it figure out by itself how to do it,” says Falanga.

The paper “The Foldable Drone: A Morphing Quadrotor that can Squeeze and Fly” has been published in the journal IEEE Robotics and Automation Letters.