Upgrade, or the seeds of a robot uprising? U.S. researchers report they’ve constructed an artificially intelligent ocean predator that behaves a lot like the organism it was modeled on. 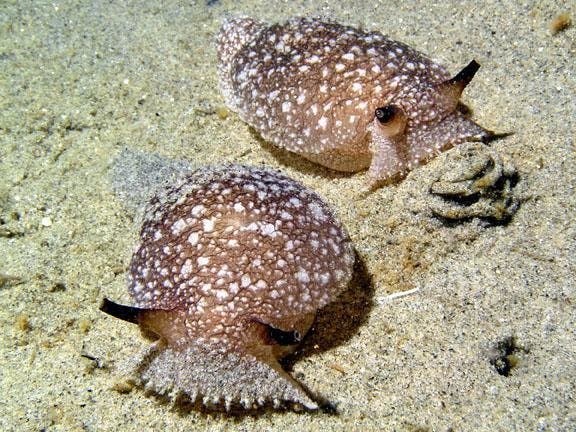 This frightening, completely digital predator — dubbed “Cyberslug” — reacts to food, threats, and members of its own ‘species’ much like the living animal that formed its blueprint: the sea slug Pleurobranchaea californica.

Slug in the machine

Cyberslug owes this remarkable resemblance to its biological counterpart to one rare trait among AIs — it is, albeit to a limited extent, self-aware. According to University of Illinois (UoI) at Urbana-Champaign professor Rhanor Gillette, who led the research efforts, this means that the simulated slug knows when it’s hungry or threatened, for example. The program has also learned through trial and error which other kinds of virtual critters it can eat, and which will fight back, in the simulated world the researchers pitted it against.

“[Cyberslug] relates its motivation and memories to its perception of the external world, and it reacts to information on the basis of how that information makes it feel,” Gillette said.

While slugs admittedly aren’t the most terrifying of ocean dwellers, they do have one quality that made them ideal for the team — they’re quite simple beings. Gillette goes on to explain that in the wild, sea slugs typically handle every interaction with other creatures by going through a three-item checklist: “Do I eat it? Do I mate with it? Or do I flee?”

Biologically simple, this process becomes quite complicated to handle successfully inside a computer program. That’s because, in order to make the right choice, an organism must be able to sense its internal state (i.e. whether it is hungry or not), obtain and process information from the environment (does this creature look tasty or threatening) and integrate past experience (i.e. ‘did this animal bite/sting me last time?’). In other words, picking the right choice involves the animal being aware of and understanding both its state, that of the environment, and the interaction between them — which is the basis of self-awareness.

Some of Gillette’s previous work focused on the brain circuits that allow sea slugs to operate these choices in the wild, mapping their function “down to individual neurons”. The next step was to test the accuracy of their models — and the best way to do this was to recreate the circuits of the animals’ brains and let them loose inside computer simulations. One of the earliest such circuit boards to represent the sea slug‘s brain, constructed by co-author Mikhail Voloshin, software engineer at the UoI, was housed in a plastic foam takeout container.

In the meantime, the duo have refined both their hardware and the code used to simulate the critters. Cyberslug’s decision-making is based on complex algorithms that estimate and weigh its individual goals, just like a real-life slug would.

“[P. californica‘s] default response is avoidance, but hunger, sensation and learning together form their ‘appetitive state,’ and if that is high enough the sea slug will attack,” Gillette explains. “When P. californica is super hungry, it will even attack a painful stimulus. And when the animal is not hungry, it usually will avoid even an appetitive stimulus. This is a cost-benefit decision.”

Cyberslug behaves the same way. The more it eats, for example, the more satiated it becomes and the less likely it will be to bother or attack something else (no matter its tastiness). Over time, it can also learn which critters to avoid, and which can be prayed upon with impunity. However, if hungry enough, Cyberslug will throw caution to the wind and even attack prey that’s adept at fighting back, if nothing less belligerent comes around for it to eat.

“I think the sea slug is a good model of the core ancient circuitry that is still there in our brains that is supporting all the higher cognitive qualities,” Gillette said. “Now we have a model that’s probably very much like the primitive ancestral brain. The next step is to add more circuitry to get enhanced sociality and cognition.”

This isn’t the first time we’ve seen researchers ‘digitizing’ the brains of simpler creatures — and this process holds one particular implication that I find fascinating.

Brains are, when you boil everything down, biological computers. Most scientists are pretty confident that we’ll eventually develop artificial intelligence, and sooner rather than later. But it also seems to me that there’s an unspoken agreement that the crux falls on the “artificial” part; that such constructs would always be lesser, compared to ‘true’, biological intelligence.

However, when researchers can quite successfully take a brain’s functionality and print it on a computer chip, doesn’t that distinction between artificial and biological intelligence look more like one of terminology rather than one of nature? If the computer can become the brain, doesn’t that make artificial life every bit as ‘true’ as our own, as worthy of recognition and safeguarding as our own?

I’d love to hear your opinion on that in the comments below.

The paper “Implementing Goal-Directed Foraging Decisions of a Simpler Nervous System in Simulation” has been published in the journal eNeuro.