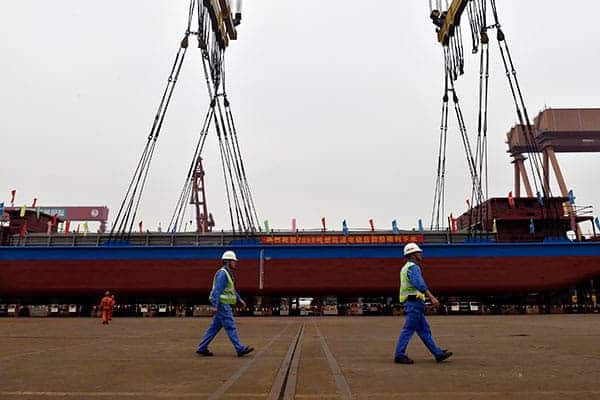 State-owned news outlet China Daily reports that the 2,000 metric-ton ship was launched to water last month in the city of Guangzhou. It was built by the Guangzhou Shipyard International Company Ltd. to shuttle goods along the inland section of the Pearl River.

It’s not the fastest electric ship out there (that’s a yacht), neither is it the smartest (that would be a planned autonomous freighter), but it definitely has a lot of oomph. The ship measures 70.5 meters (230 feet) in length and is ‘armed’ with a 2,400 kWh battery pack, allowing it to carry 2200 tons of cargo over 80 kilometers (50 miles) at a max speed of 12.8 kilometers (8 miles) per hour. After every full trip, the ship has to be charged for two hours. Conveniently, however, two hours is about how much time it would take to unload the ship while docked.

Overall, a very solid example of electric vehicles hitting the water, and for heavy-duty work to boot.

“As the ship is fully electric powered, it poses no threats to the environment,” said Huang Jialin, general manager of Hangzhou Modern Ship Design & Research Co, the company that designed the ship.

As the ship’s engines and batteries stand testament to our shifting relationship with fossil fuels, however, its cargo shows how far we still are from a complete shift: this fully-electric cargo ship, the first in the world, is earmarked for coal transport. According to Chen Ji, general manager of Guangzhou Shipyard International, the cargo vessel would help greatly reduce shipping costs for electric power operators.

“The cost of electric power is less than that (of) traditional fuel. The main cost of the new energy cargo ship depends on how much lithium battery it is equipped with,” Chen said for China Daily.

“Theoretically, the fully electric-powered ship could have more capacity in cargo loading. If it is equipped with larger energy batteries, it will carry goods of more than 2,000 tons,” Chen said.

The craft itself may be generating zero emissions on its own, granted, but when looking at the big picture it will be directly involved in amplifying climate change.

I suppose the only thing worse than an electric coal-ferry is a residual oil or coal-burning coal-ferry, however, so one could still call this a win. Cargo ships are some of the largest contributors to the transport sector’s overall greenhouse gas emissions, so swapping them for electric ones will be a net improvement. At the same time, since electricity is cheaper than other types of fuel, it would also help bring down the prices of every good that has to be shipped around. Furthermore, the same technology can also be used in other large craft such as ferries, container ships, or vessels used for short hauls.

I find the idea of using e-vehicles to make coal cheaper, however, to be hilariously ironic. Sure, it makes economic sense, but it misses the whole point of clean energy by a country mile. At the end of the day though, if you are carrying coal anyway, there’s no harm in chipping down some of the emissions.

But ships aren’t built in stone. A coal-hauler today could very well be a battery carrier tomorrow. Not an unlikely prospect, considering China’s monumental push towards solar energy in particular and renewables in general. In the end, no matter how sooty the present may be, we’re actively building the means to create a clean future.