Using 21st century nanotechnology, researchers have discovered a new mineral in samples from a meteorite discovered in Antarctica in 1969. The meteorite is 4.5 billion years old and originates from an asteroid orbiting between Mars and Jupiter. 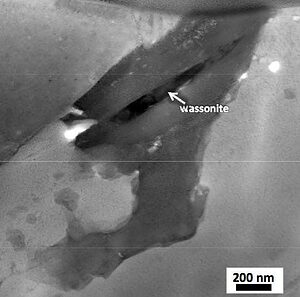 The new mineral has alluded scientists for some time since its discovery by a Japanese expedition team to Antarctica more than half a century ago, maybe due to its extremely tiny size – less than one-hundredth as wide as a human hair. Luckily nanotech has advanced dramatically since the meteorite known as Yamato 691 was discovered – a very well known historical piece in meteorite research and one of the first nine such cosmic bodies discovered in the ice-fields of Antarctica in 1969.

NASA scientists and their co-researchers from Japan and South Korea discovered the mineral after they found some unknown inclusions on the surface of the meteorite. Upon analysis they found the new mineral is made up of sulfur and titanium molecules that form an intricate crystal lattice, and although the mineral is extremely tiny it represents an integral component of the meteorite’s chemical composition.

The mineral was named Wassonite, in honor of Prof. John Wasson (UCLA) known for his unrivaled achievements in meteorite research, and was recently approved by the International Mineralogical Association for addition in the official list of minerals.

This latest discovery goes to show just how many minerals are still unknown to scientists. So far more than 40,000 specimens of celestial materials including Martian and Lunar meteorites have been collected from Antarctica – expect many of these to yield untold secrets.

“More secrets of the universe can be revealed from these specimens using 21st century nano-technology,” said Nakamura-Messenger, once again emphasizing the pivotal role of the nano-technology equipment available at NASA facilities.