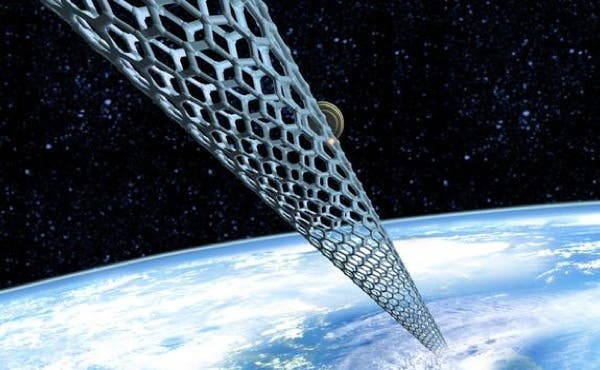 Artist impression of a possible space elevator – the image in question show the new diamond-like nanomaterial in action, though.

For the first time, scientists at Penn State University have coaxed carbon-containing molecules to form a  strong tetrahedron shape, then linked each tetrahedron end to end to form a long, thin nanothread. The resulting materials is stronger than carbon nanotubes, while the thread is only a few atoms across thick, hundreds of thousands of times smaller than an optical fiber. This sort of material might one day help us build an elevator that would carry astronauts or cargo from a point on the Earth’s surface to a geosynchronous docking station in orbit, dramatically lowering costs by eliminating the need for rockets. More immediate, practical goals include manufacturing lightweight vehicles that significantly reduce fuel consumption. 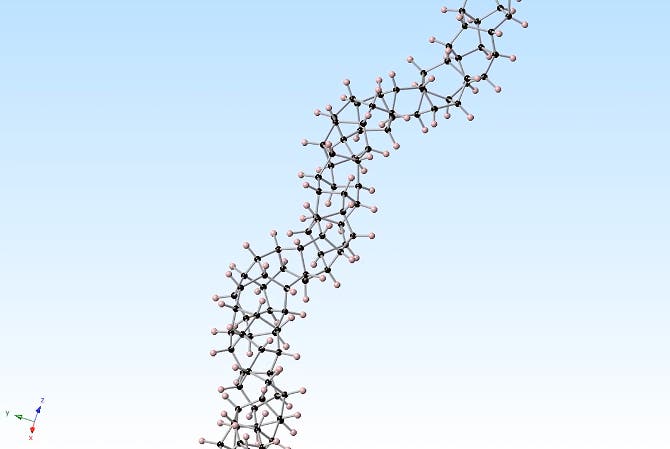 The core of the nanothreads is a long, thin strand of carbon atoms arranged just like the fundamental unit of a diamond’s structure — zig-zag ‘cyclohexane’ rings of six carbon atoms bound together, in which each carbon is surrounded by others in the strong triangular-pyramid shape of a tetrahedron. Image: Penn State University

The molecule the researchers compressed is benzene – a flat ring containing six carbon atoms and six hydrogen atoms. When compressed, the flat benzene molecules stack together, bend and break apart under pressure. As the pressure is slowly tuned down, atoms reconnect in an orderly fashion to form a structure that has carbon in the tetrahedral configuration of diamond with hydrogens hanging out to the side and each tetrahedron bonded with another to form a long, thin, nanothread. Nothing short of beautiful.

This orderly pattern forms because the constituting benzene atoms desperately want to cling onto something else, but at the same time there’s no room to move because of the high pressure. Once the pressure is slowly released, the benzene becomes highly reactive and an orderly polymerisation reaction is commenced.

“We used the large high-pressure Paris-Edinburgh device at Oak Ridge National Laboratory to compress a 6-millimeter-wide amount of benzene – a gigantic amount compared with previous experiments,” said Malcolm Guthrie of the Carnegie Institution for Science, a co-author of the research paper, which was published in Nature Materials.

“We discovered that slowly releasing the pressure after sufficient compression at normal room temperature gave the carbon atoms the time they needed to react with each other and to link up in a highly ordered chain of single-file carbon tetrahedrons, forming these diamond-core nanothreads.”

The researchers liken the process to how a jeweler delicately strings  together the smallest possible diamonds into a long miniature necklace – a very strong, atom-thin necklace. 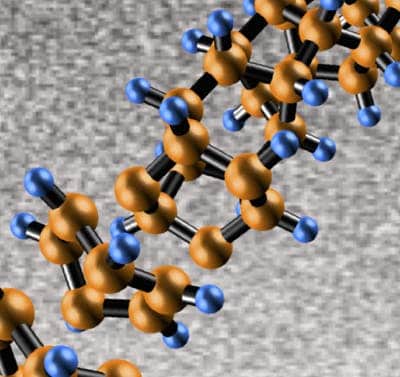 Upon inspecting the structure of the diamond nanothreads, the researchers found parts of these aren’t perfect or at least don’t look as expected. Improving upon its structure is thus an immediate goal for the team right now. Nevertheless, the findings open new doors towards a novel type of research. More materials such as these might be made, ones made from other molecules beside benzene since you can attach all kinds of other atoms around a core of carbon and hydrogen. Thus, an enormous number of new materials, some with extremely appealing properties, might be made. Who knows what we can achieve with these then. For instance, there’s this crazy idea of using diamond nanothreads to build a space elevator. We’ve written about this in the past, but now this research shows that it might be realistic to make.

“One of our wildest dreams for the nanomaterials we are developing is that they could be used to make the super-strong, lightweight cables that would make possible the construction of a “space elevator”, which so far has existed only as a science-fiction idea,” said research leader John V Badding, a professor of chemistry at Penn State, in a statement.

“From a fundamental-science point of view, our discovery is intriguing because the threads we formed have a structure that has never been seen before.”

There’s one problem though, at least for now – scientists need to find a way to scale production if we’re to ever build threads thousands of kilometers long.

“The high pressures that we used to make the first diamond nanothread material limit our production capacity to only a couple of cubic millimeters at a time, so we are not yet making enough of it to be useful on an industrial scale,” Badding said. “One of our science goals is to remove that limitation by figuring out the chemistry necessary to make these diamond nanothreads under more practical conditions.”

Nevertheless, more immediate applications include those where exceedingly strong, stiff, and light materials are required. If the manufacturing process can be scaled to production is cheap enough, we might even see vehicles made out of diamond-like strands. These would be extremely lightweight and use very little fuel. The transportation sector is one of the prime emitters of greenhouse gases, so keeping fuel consumption down will definitely help tackle global warming.