The Romans were very diligent in how they handled bookkeeping from cash to grain stocks. Most of these records, however, have been lost and it’s a mighty shame too because they can be used to track how the Roman infrastructure — the most impressive in the ancient world — changed and adapted with time. That’s where modern science comes in, though. By analyzing telltale chemical signs which marked the environment, like led isotopes, a team of researchers tracked the water quality following the eruption of Vesuvius in AD 79.

Ever since it was established as an empire, Rome had a huge demand for water, especially for its eponymous capital city. The average Roman required 200 gallons of water per day, and it’s pretty clear the Tiber River alone could not quench this thirst. As the population of Rome increased, architects solved this water demand problem by bringing in water from the surrounding areas via aqueduct.

The aqueduct is very simple, but elegant solution to the water problem. These consisted of canals and pipes that carried water from a higher elevation and gradually decreased elevation until the water destination was reached. These systems were made from concrete, but occasionally the Romans would use lead pipes. 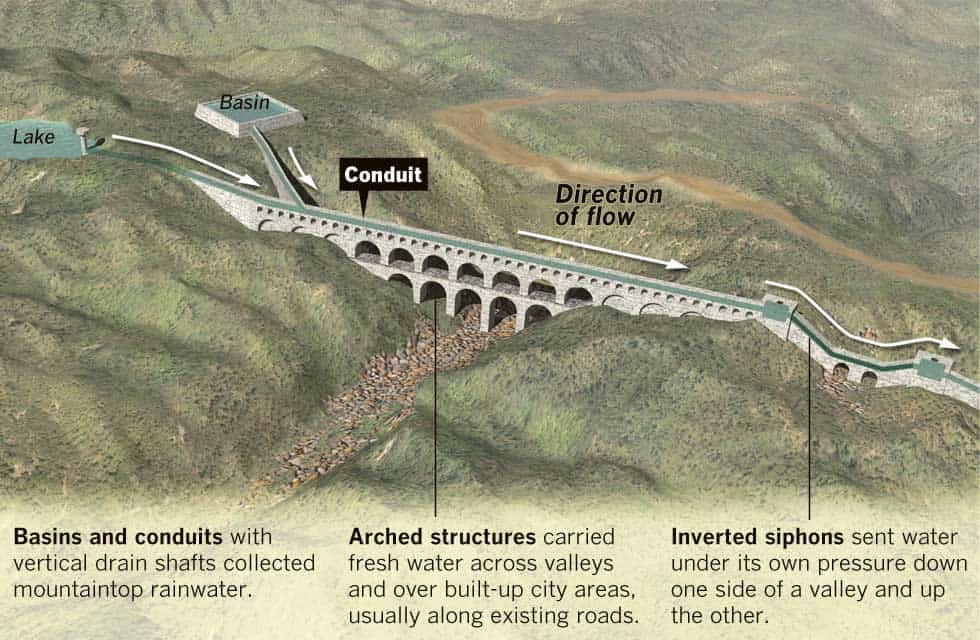 Hugo Delile at the University of Lyon in France and colleagues showed for the first time in 2014 that lead poisoning wasn’t an issue in the empire at the time. Back then, they used ratios of the isotopes lead-204 and lead-206 to calculate lead pollution in the Italian river the Tiber that would have come from the pipes in Roman cities. 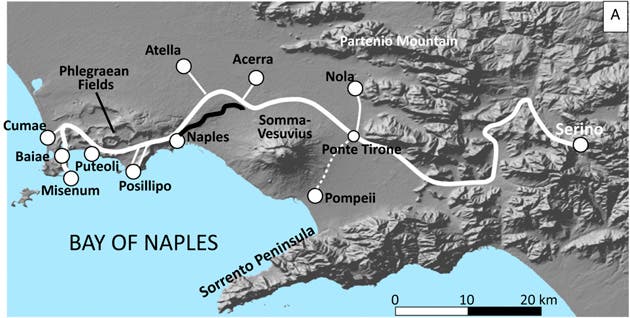 White line: Aqua Augusta aqueduct that supplied water to the cities in the Bay of Naples. Credit: PNAS

Now, like then, the same team used isotopic analysis on ancient excavated sediments, this time from the ancient harbour in Naples. The end goal was to investigate what effects the the eruption of Vesuvius had on the water supply in the empire.

The analysis suggests a dramatic shift of lead composition pre and post-eruption. Delile and colleagues say this suggests the Roman water pipe network was severely damaged following the eruption and repairs took 15 years. The analysis also revealed that the pipe system continued to expand in the Naples region despite the Roman Empire was well past its heyday.

“The Pb isotopic signatures of the sediments further reveal that the previously steady growth of Neapolis’ water distribution system ceased during the collapse of the fifth century AD, although vital repairs to this critical infrastructure were still carried out in the aftermath of invasions and volcanic eruptions,” the study’s abstract reads.