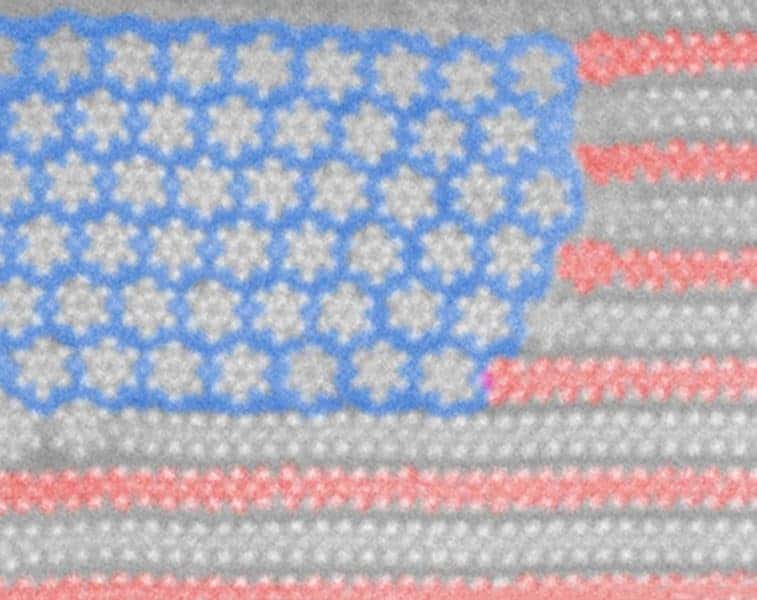 This U.S. flag is only a couple nanometers wide or thousands of times thinner than a human hair. It’s practically invisible to the human eye and the tiniest American flag ever. This pattern appeared unexpectedly when researchers heated the “stripe” material molybdenum ditelluride. Credit: University of Texas at Dalla.

Captioned above is an intriguing, two-dimensional sheet that’s just about to transform into an array of nanowires, each just a few atoms wide. This image shows how the material momentarily morphs into the familiar Old Glory. Completely by accident, the researchers made the tiniest U.S. flag ever. Moreover, this patriotic material could lead to transistors that are ten times smaller than the current state of the art.

A team from the University of Texas at Dallas was investigating new materials whose properties look promising as small, energy-efficient transistors for tomorrow’s next generation electronics. One such material was an anatomically-thin sheet made of one layer of molybdenum atoms and two layers of tellurium atoms. It belongs to a class of materials called metal dichalcogenides (TMDs), which have the potential to replace silicon in transistors. Silicon has had a fantastic run but it’s increasingly becoming limited. If a good replacement isn’t found soon, Moore’s Law — the observation that the number of transistors in a dense integrated circuit doubles approximately every two years — will cease to become relevant.

“We wanted to understand the thermal stability of this particular material,” said lead researcher Dr. Moon Kim in a statement. “We thought it was a good candidate for next-generation nanoelectronics. Out of curiosity, we set out to see whether it would be stable above room temperature.”

First, the researchers were surprised to see a new pattern emerge that was “aesthetically pleasing to the eye,” Kim said. The repeating rows or stripes of molybdenum ditelluride transformed into a shape that resembled six-pointed stars. Later, the researchers learned that, in fact, the material was transitioning into hexa-molybdenum hexa-telluride, a huge mouthful that’s a one-dimensional wire-like structure. Essentially, it’s a structure consisting of six central atoms of molybdenum surrounded by six atoms of tellurium.

The “stripes” and “stars” looked very much like the United States flag so the researchers made a false-color version with a blue field behind the stars and half of the stripes coloured in red to much effect. It’s a nanoflag!

“Then, when we examined the material more closely, we found that the transition we were seeing from ‘stripes’ to ‘stars’ was not in any of the phase diagrams,” Kim said in a statement. “Normally, when you heat up particular materials, you expect to see a different kind of material emerge as predicted by a phase diagram. But in this case, something unusual happened — it formed a whole new phase.”

Each of these nanowires from the array is a semiconductor, meaning it can switch current on and off — a basic property for any transistor. But when these individual nanowires are group together though they start behaving like a metal.

“We would want to use the nanowires one at a time because we are pushing the size of a transistor as small as possible,” Kim said. “Currently, the smallest transistor size is about 10 times larger than our nanowire. Each of ours is smaller than 1 nanometer in diameter, which is essentially an atomic-scale wire.”

“If used in future technology, would result in powerful energy-efficient devices,” Kim said.

It’s interesting to note that the material’s behavior could not be predicted in theory. When subjected to varying external conditions such as temperature or pressure, certain materials will undergo a phase change. One classic example is water’s phase change from a liquid into vapor when it’s boiled at temperatures in excess of 100 degrees Celsius (at sea level). Some materials, however, undergo phase changes differently, namely the atoms rearrange and redistribute changing the structure and composition of the material. This can, of course, affect the material’s properties. Scientists have made so many experiments to phase changing materials that there’s enough data to make a so-called phase diagram which can predict property changes in a material when it changes phase.

However, no phase diagram could predict this exotic material’s behaviour. Next, Kim and colleagues plan on running more tests meant to determine how to turn the material into a functioning material. Particularly challenging will be separating out the individual nanowires. They would then “But this is a start,” Kim said.

One thought on “Tiniest U.S. flag ever appeared by accident after researchers toyed with a 2-D material”