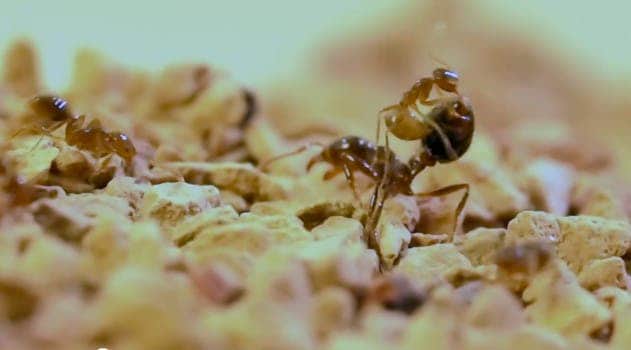 Tawny crazy ants (Nylanderia fulva) attacked by rivaling fire ants (Solenopsis invicta). To protect itself against the deadly fire ant venom, crazy ants secret a venom of their own that cancels the other. When the two mix, a new substance whose class has never been encountered in nature emerges. Photo: Ed LeBrun

Ionic liquids (IL) are basically liquid salts with very low melting points. These are heavily used in industry as solvents for chemical processes or as performance enhancers, part of electrolytes or lubricants. It’s only recently that an ionic liquid has been found to occur in nature, after a team of researchers at University of South Alabama found that the substances forms when two ant species mix their venom.

The team led by Prof. James Davis was studying two ant species fighting over territory: fire ants (Solenopsis Invicta) and tawny crazy ants (Nylanderia fulva). Fire ants and tawny crazy ants are native to South America, where their battle may have raged for thousands of years. Fire ants arrived in the United States first, sometime in the 1930s. The crazy ants didn’t start to show up until the early 2000s.

When the fire ants would sprinkle the tawny crazies with their venom, the latter would respond by secreting formic acid, their own venom, to groom and rid themselves of the poisonous attack. When the two substances mix, a viscous ionic liquid containing a mixture of different cations along with formate anions forms.

The properties of the resulting mixed-cation ammonium formate milieu are consistent with its classification as a protic IL.  Seeing how the IL was discovered by accident, it’s very much likely that other naturally occurring ILs might be discovered.

It’s interesting to see how well the crazy ants have adapted to fire ants’ venom. In a separate study, Edward LeBrun, a researcher at the Fire Ant Research and Management Project at the University of Texas at Austin, found when crazy ants were prevented from secreting the antidote after being brushed with a bit of nail polish on their abdomens, 48% of them died when exposed to fire ants. When they were allowed to secrete the antidote, 98% survived.