We’ve previously told you how our ancestors’ adaptation to metabolizing alcohol which first happened some 10 million years ago may have been essential to their survival. There’s more to it though. The same enzyme that metabolizes alcohol, dehydrogenase (ADH4), may be eventually used to transform CO2 into alcohol, which could be later used as a fuel, according to a paper recently presented at a conference by researchers at Johannes Kepler University, Austria. 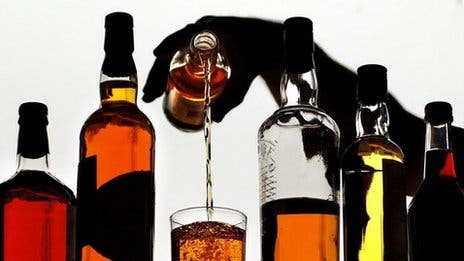 In the wake of the recent climate change talks in Lima, where environmental ministers from each United Nations state met to discuss a global warming mitigation framework, there’s a lot of talk now about what countries can do to limit their CO2 emissions. Arguably, there’s a great deal of damage that’s already been made. Even if the world stopped dumping CO2 into the atmosphere today, there’s still a net negative CO2 imbalance that’s set to stay this way for centuries. Thus, the idea is to find ways to sequestrate or transform CO2 from the atmosphere or oceans. The approach suggested by the Austrian researchers might turn out to be viable.

The dehydrogenase enzyme is employed inside the liver to breakdown alcohol into a series of byproducts, including carbon dioxide. Being a reversible reaction, scientists found that it could prove to be useful into turning CO2 back into alcohols such as methanol or butanol.

The team developed a three-step process, with each step employing a different enzyme to break down the CO2 first into acids, then to aldehydes and finally to alcohols. In greater detail, dehydrogenase was mixed into a alginic acid solution and silicates, which gelled into beads. These were mixed in a buffer solution where nicotinamide adenine dinucleotide hydrogenase (NADH) was added – another enzyme that generates hydrogen and electrons to power the reaction. Finally CO2 was pumped through the mixture.

There’s one big problem with this process, though: it’s highly inefficient. That’s because the NADH is extremely expensive and, most importantly, it gets oxidized really fast. To make the enzyme work again, a lot of energy needs to be pumped into the system or a lot more than the environmental benefit gained from transforming the CO2 in the first place. So the enzyme was shelves in favor of an elecrochemical method. Instead of NADH, an electrode made out of carbon fiber felt was used. When in contact with the beads mixture, the felt acted like a sponge concentrating the beads thus turning the electrode into an enzyme coated one. When electricity is ran through the system, complex alcohol molecules such as ethanol and butanol are generated by a repeatable process.

Of course, if these alcohols are used as fuels they will release CO2 in the process, but it’s CO2 that’s been sequestrated in the first place, so it’s neutral just like biodiesel (see “biodiesel, not that green after all”). It’s only neutral, of course, if the energy that goes into producing the alcohol or biodiesel doesn’t release additional CO2. As such, the authors envision that a sensible power source for the process is renewable energy. In fact, the alcohol made from CO2 could be a solution to another problem: storing energy from solar or wind power.

“We are trying to reduce the CO2 electrochemically,” Stefanie Schlager, a doctoral student at Johannes Kepler University, Linz, Austria, told a session at the Materials Research Society’s fall meeting in Boston last week.

Similarly, last year we reported the findings of a group from the US found a way to transform the carbon dioxide trapped in the atmosphere into useful industrial products. Their process involved using a microorganism in special conditions to achieve this, however the energy input required to meet these conditions are tremendous and as such the process is totally impractical. Now, if you ask me, the most interesting carbon sequestration technique comes from the UK. There, at University of Newcastle, researchers found a way to react gaseous CO2 with low grade minerals such as magnesium and calcium silicate to produce limestone, a common and important constructions material. The group was awarded a $9 million grant and is the process of building a pilot plant.