In the face of unstable climate and weather patterns, grasslands may be more reliable carbon sinks than forests, a new paper suggests. 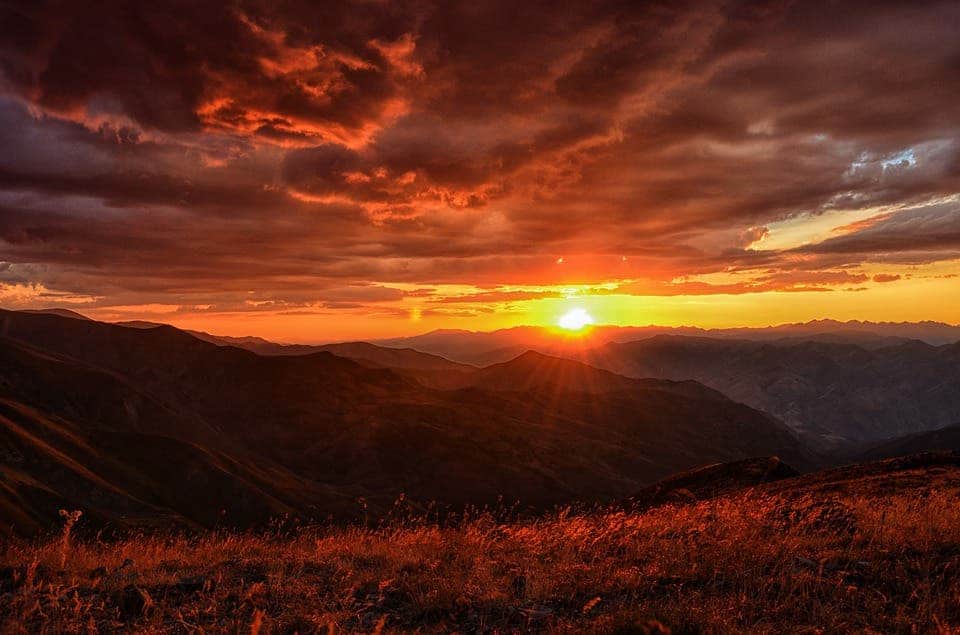 Forests are key carbon sinks for our planet. All plants capture carbon atoms from CO2 gas as they grow, using them to weave together new tissues. Trees, being some of the largest plants out there, are particularly effective. Their sheer size stands as a testament to this ability — each and every square centimeter of that plant is build using carbon locked away from the atmosphere.

In recognition of this fact, forests are often considered net carbon sinks in cap-and-trade/emission trading type schemes. In this case, particularly, they’ve been included in California’s cap and trade system since the state’s Air Resources Board (ARB) adopted the U.S. Forests Compliance Offset Protocol in November 2014.

So why then don’t we just plaster the Earth in trees and spew CO2 without a care in the world? Well, first off, it wouldn’t work — trees alone can’t save us from climate change, studies have shown. Another issue is that our photosynthesizing friends also have an Achille’s heel: their ability to gobble up carbon is matched by their propensity to burn. Forest fires free stored carbon mightily fast and disrupt carbon-storing ability over many years.

One new paper published by researchers from the University of California, Davis, shows that in the context of climate change, forests may no longer be the go-to ecosystems for carbon storage. Decades of fire suppression has left California’s forests rich with fuel while warming temperatures and drought increase the risk of wildfires. Overall, they write, the higher incidence of such fires effectively turned the state’s forests from carbon sinks to carbon sources.

Grasslands, the team surprisingly reports, are more resilient carbon sink ecosystems than forests in today’s California. The findings warrant including grasslands in the state’s cap-and-and trade market, the authors add.

“Looking ahead, our model simulations show that grasslands store more carbon than forests because they are impacted less by droughts and wildfires,” says lead author Pawlok Dass. “This doesn’t even include the potential benefits of good land management to help boost soil health and increase carbon stocks in rangelands.”

Biomass in forests is very top heavy, in that most of it is stored in wood and leaves above ground. By contrast, most biomass in grasslands is concentrated under the surface. Fires can’t draw this biomass as fuel since there’s not enough oxygen to sustain combustion below the surface. Because of this, carbon stored in underground biomass isn’t affected by wildfires — which are a serious threat in the context of climate change.

To gauge how forests and grasslands would fare as climate sinks in the future, the team ran simulations of four scenarios:

California’s forests were more reliable carbon sinks than grasslands only under the first scenario, the team explains. It’s extremely unlikely that those conditions will ever come to pass, as the scenario requires more aggressive global greenhouse gas reductions than those called for under the Paris Climate Agreement (and we’re not even meeting those yet). As things stand now, grasslands may become the only secure net carbon sinks through to 2101, the team explains. 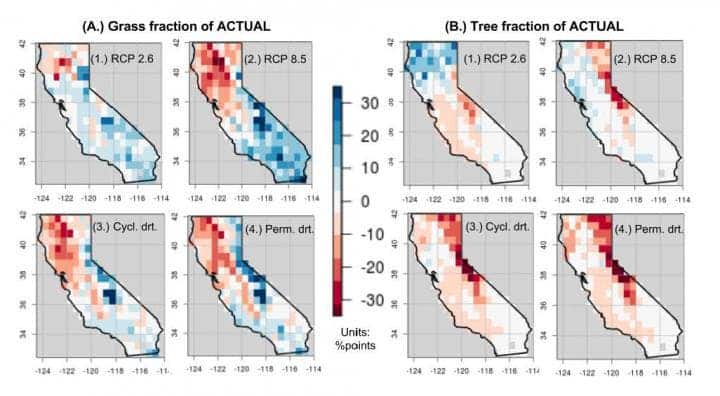 The team cautions that their findings don’t mean we should cut down forests — far from it. It only goes to show that from a cap-and-trade & carbon-offset perspective, conserving grasslands and promoting rangeland practices that promote carbon sequestration could help more readily meet the state’s emission-reduction goals. While trees stay on the cap-and-trade portfolio, protecting them through strategies meant to limit and combat wildfires — prescribed burns, strategic thinning and replanting, for example — will reduce overall carbon losses.

Trees and forest provide a wealth of environmental services, and we would be wise to conserve them. Finally, while grasslands may become the more reliable carbon sinks, forests still have the ability to soak up much more carbon per unit or surface than grasslands.

“In a stable climate, trees store more carbon than grasslands,” said Professor Benjamin Houlton, a paper co-author. “But in a vulnerable, warming, drought-likely future, we could lose some of the most productive carbon sinks on the planet.”

“California is on the frontlines of the extreme weather changes that are beginning to occur all over the world. We really need to start thinking about the vulnerability of ecosystem carbon, and use this information to de-risk our carbon investment and conservation strategies in the 21st century.”

The paper “Grasslands may be more reliable carbon sinks than forests in California” has been published in the journal Environmental Research Letters.