Whenever a massive object, with an equally massive gravitational pull, like black holes or galaxy clusters, falls between an observer, say a telescope, and a distant target in the background to be observed, than a gravitational lens is formed. Light emitted from the distant object gets twisted by the massive object, and ends up distorted at the telescope – this can be magnified, like if the light passed through a huge telescope. Gravity lenses are critical to astronomical observations of distant objects, which aid scientists learn more about how early galaxies formed, and how the Universe came to be. 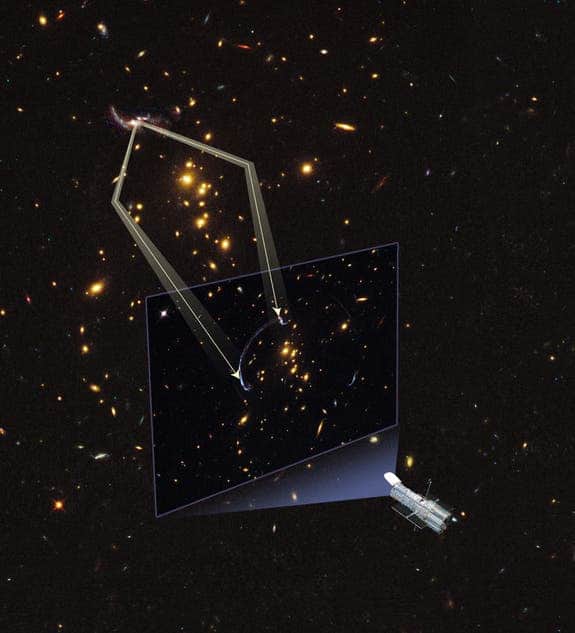 Illustration showing how a foreground galaxy cluster that stands between Hubble and the background galaxy to be imaged acts like a lens in space, warping space like a funhouse mirror due to massive gravity. The resulting image is stretched into an arc, which scientists need to correct for an accurate view. (c) NASA

Recently, the Hubble Space Telescope harnessed such a gravitational lens, created by a cluster of closer galaxies located about 5 billion light-years away, and captured a distant galaxy 10 billion light-years away. The researchers found it was  three times brighter than any other seen through a gravity lens, and like many great scientific discoveries, it was all discovered by accident.

“This observation provides a unique opportunity to study the physical properties of a galaxy vigorously forming stars when the universe was only one-third its present age,” NASA officials explained

The problem with gravitational lenses is the distortion itself, which makes zooming possible in the first place. Astronomers aimed the space telescope at the galaxy cluster RCS2 032727-132623, which is surrounded by a nearly 90-degree arc of bright light from an even more distant galaxy. Because of the distortions, the image of the background galaxy is repeated several times. Using Hubble data, astronomers carefully removed the distortions and instead left an clear and enchanting sight of the distant galaxy filled with star-forming areas that shine brighter than similar spots in our own Milky Way. 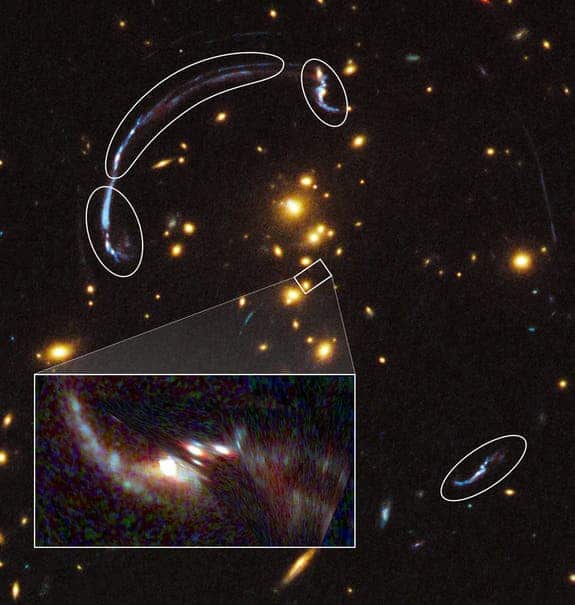 The zoom in rectangle shows the brightest galaxy so far found through a gravity lens. It's 20 times larger and over three times brighter than typically lensed galaxies.The rounded outlines that form an arc are actually the remnant distortions discussed in the article. (c) NASA

“Hubble’s view of the distant background galaxy is significantly more detailed than could ever be achieved without the help of the gravitational lens,” NASA officials wrote.