After being missing in the action for more than four decades, Wallace’s giant bee (Megachile pluto) has been found in a remote part of Indonesia. The huge insect with enormous jaws — about the size of a human thumb — is the largest bee species in the world.

The giant bee, also known as the ‘flying bulldog’, was first discovered by British naturalist Alfred Russel Wallace, famous for independently proposing the theory of evolution through natural selection alongside Charles Darwin. When Wallace first came across the beefy insect in Indonesia’s North Moluccas islands in 1858, he described it as a “large black wasp-like insect, with immense jaws like a stag-beetle.”

Despite its conspicuous size, Wallace’s giant bee likes to keep to itself. For more than a century it hadn’t been spotted by Western scientists, only to be seen again by entomologist Adam Messer in 1981, who called it the ‘king of bees’. The lack of sightings, despite scientists’ best efforts, coupled with wide scale habitat loss, has led many to believe that the insect had gone extinct. Although Indonesia has abundant flora, it’s also a country where regulations are weak and forests are being cut down for agriculture.

But then Clay Bolt, a specialist bee photographer, did the unimaginable: he found Wallace’s giant bee, where many others had failed before him. Several months prior to the discovery, Bolt was introduced to a museum specimen of the giant bee by Eli Wyman, an entomologist at the American Museum of Natural History. The two quickly bonded through their shared interest of seeing the bee in the wild and hatched a plan for an expedition. 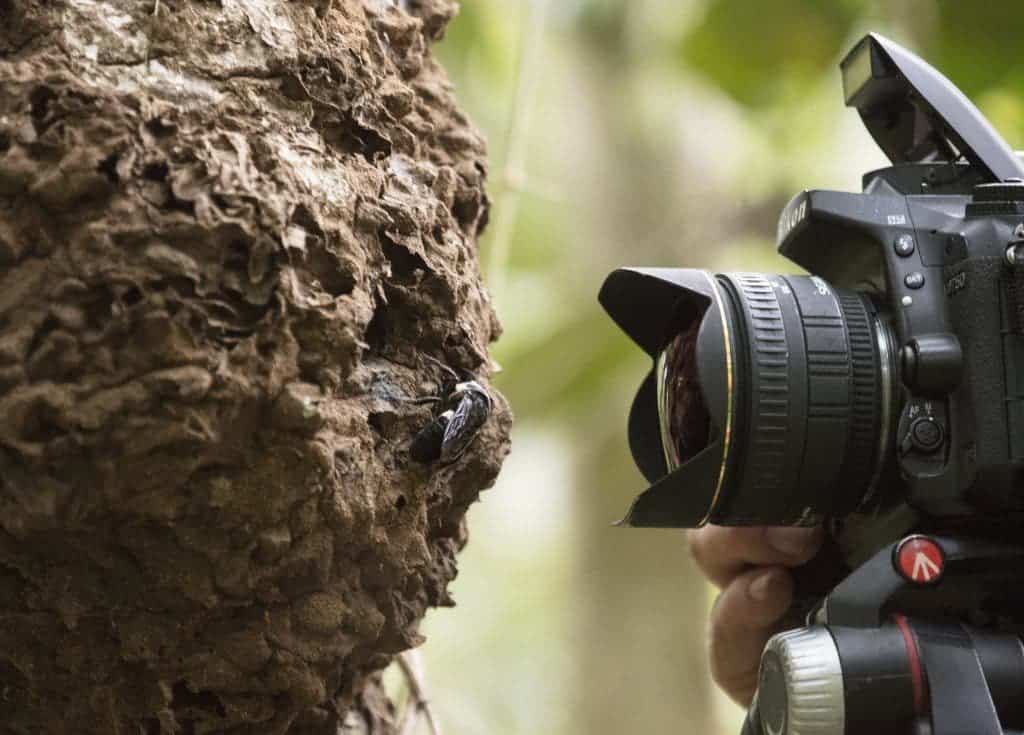 In January, the two had arrived with a search party in Indonesia where they explored the rainforest in North Moluccas. For a week, the crew braved extreme heat, humidity, and thunderstorms, as they looked for the giant bee’s nests that are typically carved into termite mounds in trees. They were down to their last day with nothing to show when a guide spotted a promising low-lying termite mound. When they peeked inside the resin-covered enclosure, the explorers thought they had spotted a snake. To everyone’s surprise, they found that the creature making a racket inside was a Wallace’s giant bee. They quickly blocked the nest’s exit and collected the bee.

“We were just basically freaking out after so many years of planning and almost giving up hope,” Bolt told Earther. “It was an incredible moment to realize that we came all this way, other people have looked for it, and here we were: filthy and sweaty and we somehow found this insect. For me, it was a moment of tremendous gratitude and humility that I was a part of this moment and this team.”

Rediscovering the giant bee is certainly a breakthrough — yet the real tough part is only just beginning. Now, researchers will have to work on plans designed to protect the species, which will require more studies that might estimate how many individuals are left and what the state of their habitat is. The fact that the bees live in very remote locations is reassuring, but there is still a lot we don’t know about this elusive species.

“I hope this rediscovery will spark future research that will give us a deeper understanding of the life history of this very unique bee and inform any future efforts to protect it from extinction,” Wyman said in a statement.