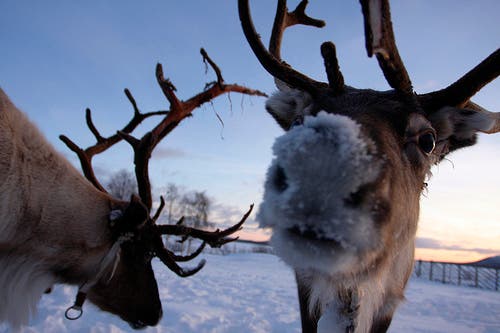 Labelled as an outcast by the rest of Santa’s sleigh pulling reindeer, Rudolph the red-nose reindeer, though mocked off, is indispensable and without him Christmas might not make it to every house from all corners of the globe. With his very shiny nose, Rudolph guides Santa’s sleigh even through the harshest of weather, but exactly why is his nose so red? Dutch scientists suggest that Rudolph’s nose has  microvascular flow issue in his nasal mucosa.

“In colder climates and also when they are higher up in the atmosphere pulling Santa’s sleigh, the increase in blood flow in the nose will help keep the [nose’s] surface warm,” Dr. John Cullen of the University of Rochester

The scientists used high-tech instruments like hand-held intravital video microscopes to analyze and then compare the blood vessels of two reindeer (Rangifer tarandus) with those of human volunteers – five were healthy and one had nasal polyps. They found reindeer have 25 percent more capillaries carrying blood to their nasal area. Reindeer, like most mammal, don’t sweat and in turn have to rely on other methods to regulate their internal body heat, like through their noses. When put to run on a treadmill, thermographic imagery revealed hot spots in the reindeer’s nose. Also, the researchers found glandlike structures in the nasal mucous membrane of reindeer, which were surrounded by capillaries.  The scientists at  Erasmus Medical Center in Rotterdam, the Netherlands, and the University of Rochester in New York write in their paper:

“The exceptional physical burden of flying with a sleigh with Santa Claus as a heavy load could have caused cerebral and bodily hyperthermia, resulting in an overworked nasal cooling mechanism that resembles an overheated cooling radiator in a car: Rudolph suffered from hyperemia of the nasal mucosa (a red nose) under more extreme heat loads during flight with a sleigh.”

Curiously enough, one  of the humans was examined after inhaling 0.0035 ounces (100 milligrams) of cocaine (for the sake of science), “a drug routinely used in ear, nose, and throat medicine as a local anaesthetic and vasoconstrictor.”

“We’re kind of glad they didn’t do the same thing with the reindeer, because the last thing we would want is reindeer on cocaine, pulling Santa around the sky,” said Cullen.