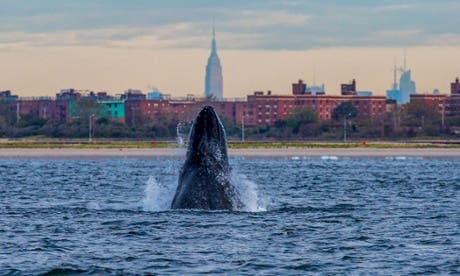 After cleaning the Hudson River, which spills into New York harbor, marine biologists report increased sightings of whales and sharks around the Big Apple’s waters. The cleaner waters now harbor more fish and nutrients, which in turn has led to a surge in numbers. Dolphins and seals are also on the rise.

The Hudson River used to be filled with pollution and garbage, but in the past five years the city’s public administration took dramatic action to curb water contamination. As a result, whales and sharks in the area have steadily risen in numbers, attracted by prosperous waters.  Gotham Whale, a wildlife tracking group, counted 29 whales, all humpbacks, in New York waters from the start of the feeding season in the spring to the end of July 2014, compared with 43 for the whole 2013 season, 25 in 2012 and five in 2011. 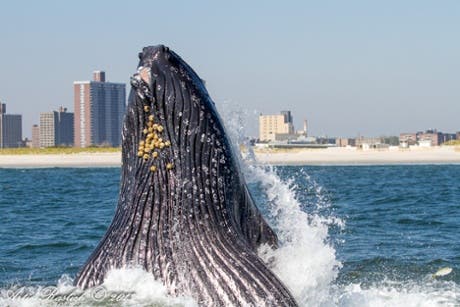 So, this year sailors and tourists had the chance to marvel at the breathtaking humpbacks’ “lunge feeding” on numerous occasions. In this spectacle, the humpback make a dashing rise above the water, engulfing thousands of pounds of fish in one gulp, while seawater is filtered through their baleen grills. 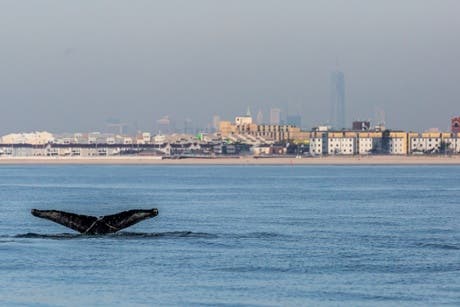 It’s not all good news, though. Rising numbers of whales meant that there were more reported accidents around New York and New Jersey harbors. As one of the busiest marine destinations in the world, increased vigilance is required on behalf of local authorities. Concerning sharks, from New Jersey to Cape Cod, in Massachusetts, fishermen have reported increased instances of seeing and reeling in great whites and other sharks. Apparently because of the better food, many sharks looking to migrate North for the summer feeding season decided to linger around New York. We’ve yet to find some actual numbers, but the National Oceanic and Atmospheric Administration will issue a report soon enough. What’s perhaps most interesting though is a similar report of shark population surge, this time on the other end of the continent. The same NOAA reports great white numbers rising an estimated tenfold in Californian waters, after decades of decline.

New York beach enthusiasts and swimmers should not panic though. White sharks do not venture closer than one mile to shores.

“Shark attacks are so rare even in waters where humans and sharks are known to coincide,” said Paul Sieswerda, head of the Gotham Whale . “I know it’s the start of [Discovery’s] Shark Week, but that doesn’t concern me.”