The Great Barrier Reef, which stretches 2,000km (1,200 miles) along the coast, is the world’s largest living ecosystem. Yet it’s being threatened and every year the coral retreats at the hand of pollution, tourism, farming and pests. One such pest is the crown-of-thorns starfish which attaches itself to the coral and destroys it with its venomous thorns. Various pest control measures have been tried, but none proved more effective than injecting the animals with vinegar. James Cook University researchers tried out various concentrations of vinegar, needle size and injection locations until they found the sweet spot for a 100% kill rate within 48 hours of contact. Widespread and sustained (you have to control the starfish every year following breeding season) could thus help save the Great Barrier Reef, or at least buy time until we address the more serious causes leading to its destruction. 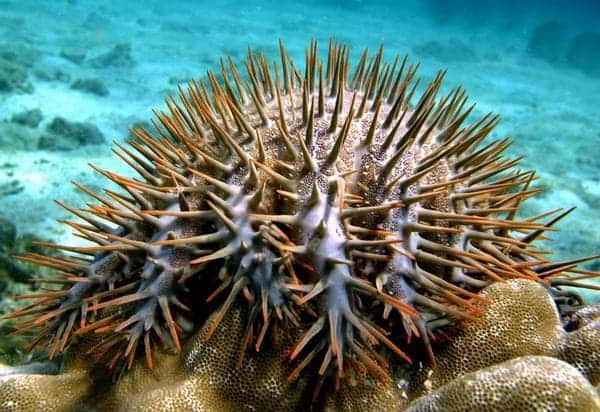 Widespread throughout the Coral Triangle, Crown-of-Thorns Sea stars (COTS) aren’t actually star shaped. Rather, they resemble flattened sea-urchins, with 12 to 20 arms radiating from a central disc, densely coated by needle-tipped spikes. Mammoth appetites allow adults to chomp through six square meters of coral reef annually. An outbreak can be devastating – live coral cover in Palawan’s Green Isle Bay plummeted from 70% to 10% in just a few months. Full recovery takes years and can be hindered by the inevitable growth of algae. When this happens, only browsers such as surgeonfish or rabbit fish can graze off enough space for new corals to develop.

“COTS are the perfect coral predators because of their highly-developed breeding and defence capabilities,” explains WWF-Philippines CEO Jose Ma. Lorenzo Tan. “They are believed to have the highest fertilization rates of all known invertebrates. A tire-sized adult can spew up to 60 million eggs per batch, so if just 1% survives, 600,000 will – as Spock says – live long and prosper.”

Previously, researchers have tried injecting ox bile in the crown-of-thorns starfish population one-by-one. This had good results, but the ox-bile is hard to come by and expensive. Through pure trial and error, the researchers led by Lisa Boström-Einarssom tried out various substances before finally finding vinegar, an inexpensive common household item, to be the best fit. Injecting 20 ml of vinegar has as a 100 percent strike rate for any type of starfish in the trial. Some 350,000 starfish were culled by divers last year in their trial.

“It is a different process (to using ox bile),” Boström-Einarssonfrom explains to Gizmag. “There is acid in the vinegar and because the starfish is made mostly of water, it cannot regulate the pH and its tissue just melts away.”

Australia’s Great Barrier Reef is desperate need of help. Its size is just half what it was only 30 years ago. Considering the situation, Boström-Einarssonfrom and team have come up with a great solution, although very difficult to implement. Divers have to inject the starfish one at a time, which can prove difficult since there are  12 million crown-of-thorns starfish on the Great Barrier Reef. Each female lays 65 million eggs during the breeding season. What you have to do in this situation is have a really large squad of divers each year ready to cull the starfish, which might prove to be very expensive (what isn’t?). Another alternative is to design a aquatic robot that can do the job faster, more effectively and cheaper.

Of course, you can also address the root. The crown-of-thorns starfish is one of the leading causes of coral loss in the Great Barrier Reef over the past 27 years, and at the same time their numbers have gone up because they have more to eat. Their favorite food is phytoplankton (algal blooms) which has significantly become more widespread around corals because of excess nitrogen. This nitrogen comes from runoff pollution from fertilizers used by the banana industry in the Wet Tropics, and the sugarcane industry. University of Queensland researchers found  13% of sugarcane land is managed with best practice for nutrients and only 30% of the nitrogen in fertilizer ends up in the harvested crop. What happens is the nitrogen winds up in the soil, instead of getting absorbed by the plant itself, where it washes into rivers and ultimately the ocean. Specifically, sugar cane farmers seem to use much more nitrogen (urea or ammonia) fertilizers than they have to, at the expense of the Great Barrier Reef.

Despite a major setback this year when UNESCO declined to grant protected status for the reef, this are shaping up for the better. According to  Susanne Schmidt writing for Science 2.0, “phosphorus in reef waters fell by 14.5%, suggesting that the targeted 20% reduction in phosphorus loads by 2018 is achievable. Pesticide and sediment loads fell by about half, tracking towards the 60% reduction target for pesticides, and a more modest goal of 20% reduction of sediment load by 2018.”