Most people would be surprised to find out that you don’t only hear with your ears – you can also hear directly with your skull. Our skull bone can pick up and conduct sounds to an extent and a new model developed by German and British researchers has shown why and how we actually perceive sounds with our skull.

Our sense of hearing is a very complex system, but at the core of it lies the inner ear. When sounds travel from the outside ear and eventually reach the inner ear they cause different regions of the basilar membrane in the inner ear to vibrate. However, the bone surrounding the inner ear can also vibrate, and transmit information.Tatjana Tchumatchenko from the Max Planck Institute for Brain Research in Frankfurt and Tobias Reichenbach from Imperial College London have developed a new model which shows that the vibrations of the bone and basilar membrane are coupled. In other words, they can also mutually excite each other.

This is where it gets more complicated. Which regions of the membrane they vibrate depends on their frequency, but what if the bone vibrates too, won’t that interfere with the signal? Also, what happens if two sounds with different frequencies arrive at the same time? Won’t they overlap and cause chaos? This model clears things out.

“Our results provide an elegant explanation for this long-known but poorly understood observation,” says Tobias Reichenbach from Imperial College London. 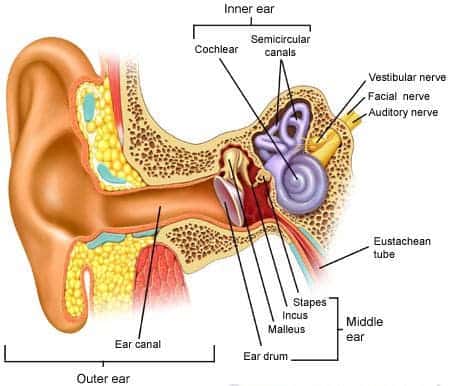 If two sounds with different frequencies arrive at the inner ear at exactly the same time combination tones, or so-called otoacoustic emissions, are produced in the inner ear through the nonlinearity of the membrane. Otoacoustic emissions are generated from within the inner ear. Having been predicted by Thomas Gold in 1948, their existence was first demonstrated experimentally by David Kemp in 1978. Also, even when sounds aren’t received in the traditional way through the air (in some cases of deafness, for example), it’s still possible to receive some acoustic information strictly via bone vibration.

Precisely how these sounds leave the inner ear and how they spread inside the cochlea is still a matter of scientific debate.

“In our study we have shown that the combination tones can leave the inner ear in the form of a fast wave along the bone surface, and not, as previously assumed, by a wave along the basilar membrane,” explains Tatjana Tchumatchenko from the Max Planck Institute for Brain Research.

This model will strengthen our understanding of the complex interaction between the dynamics of fluids and the mechanics of the bone, ultimately providing future clinical and commercial applications of bone conduction, such new-generation hearing aids and combinations between headphones and glasses.