Just look at this guy swimming around with a perforated stomach: (a) profile view of the right side on 6 December 2014; (b) ventral view on 21 December 2014. At this time, there was no protrusion from the underside of the animal’s body. Images: Joanne Fraser, Kessel et al./Marine and Freshwater Research

After 400 million years of being an apex predator, you’d expect sharks to have some pretty awesome skills — and they do. But this really took us — and more importantly, scientists — by surprise.

It all started when a wild lemon shark (Negaprion brevirostris) ingested a piece of steel, a fish stringer. Scientists observed the shark 12 times between 6 December 2014 and 14 December 2016 and noticed that the fish stringer was slowly exiting through the shark’s skin. Now, shark skin is quite tough, so there’s no way the object would have gotten there through some freak event. It’s also not a projectile, and there was no wound around it, as would have been in the case of an impact. So the fish stringer was coming from inside out.

It’s not really surprising for lemon sharks to feast on man-made objects that aren’t good for them.

“Ingestion of foreign objects by sharks has long been established in both the literature and popular culture,” writes the team, which was led by conservation biologist Dr Steven Kessel, director of marine research at Chicago’s Shedd Aquarium, and lead researchers of the study. “This has largely been the result of a long-standing human fascination with cutting open shark stomachs to reveal strange contents, such as bibles, unexploded bombs and ticking watches.”

They noted the gradual emergence of the object, through its skin, until nothing was left. After both ends were out, the shark was free of the unwanted object and started the scarring process. After one year, only a tiny scar was left. 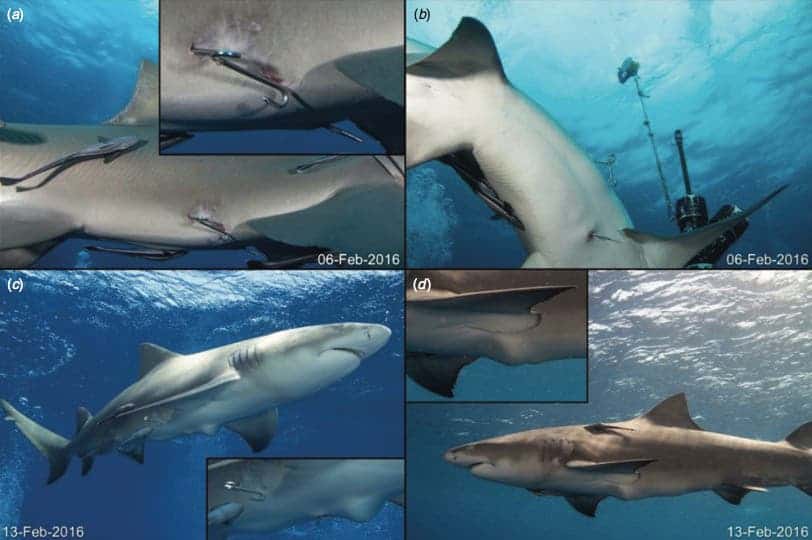 Observations taken on 13 February 2016 show both the stringer’s free end, which popped out of the ventral (under) side of the body, and the initial structure protruding on the right. Images: Joanne Fraser, Kessel et al./Marine and Freshwater Research.

So let’s run through this whole thing again. Shark eats a steel fish stringer, and then it just pushes it out of the hard way: through its stomach lining, and then through its very skin. Researchers also noted a bulge on the animal’s belly, which perhaps emerged because the stringer nicked the animal’s liver. It’s quite possible that the object was actually pushed through the shark’s organs.

We knew that sharks were tough and they can do some impressive things, but what makes this so special is the resilience it exhibited to internal trauma. Let’s not forget, aside from the removing of the object itself — this shark just swam around with a perforated stomach for one year! We’re also not talking about a very small object.

“The most surprising thing for me was the sheer size of the object,” says Kessel. “I have seen several sharks with fishing gear poking through their body walls, but never anything this large and never such a detailed account as our photographer and coauthor, Joanne Fraser, managed, and had the insight, to capture.”

No doubt, regenerative abilities are extremely useful to apex predators, especially those like sharks which often hunt dangerous prey such as porcupine fish and stingrays, but the shark might not be doing it on itself. Kessel believes that sharks, some of the biggest predators in the oceans, might get help from the ocean’s tiniest inhabitants: microbes.

“We believe now that [sharks] actually co-exist with many marine microbes in ways that are foreign to land animals,” he says. “For example, it is not unusual for us to culture a bacteria from a blood sample collected from a shark that would be very troubling for almost any land animal.”

It may be that sharks tolerate some microbes and bacteria, which in turn help them manage such impressive feats. But we’ll need to study them more before we can say for sure what’s happening — if we get the chance.

An estimated 100 million sharks are killed by people every year, due to commercial and recreational fishing. In some parts of the world, especially in Asia (but also North America), shark fin soup is regarded as a delicacy, rich in nutrients. Shark finning yields are estimated at 1.44 million metric tons for 2000, and 1.41 million tons for 2010. That’s one and a half million tons of shark fins, which translates into another 100 million shark killings. It’s not uncommon for the fishermen to cut the fins of the shark and then “release” it, only to suffer a slow, agonizing fate, unable to move at the bottom of the sea. Sharks have been around since the Devonian, more than 400 million years ago, way before the dinosaurs. It’s a special kind of tragedy for such a magnificent beast to succumb because of soup.

A veteran of the seas.