Researchers at the Karolinska Institutet, Sweden, report discovering a new structure in human cells. The role of this cellular structure protein seems to be fixing cells to surrounding tissues and aiding in division, the team reports. 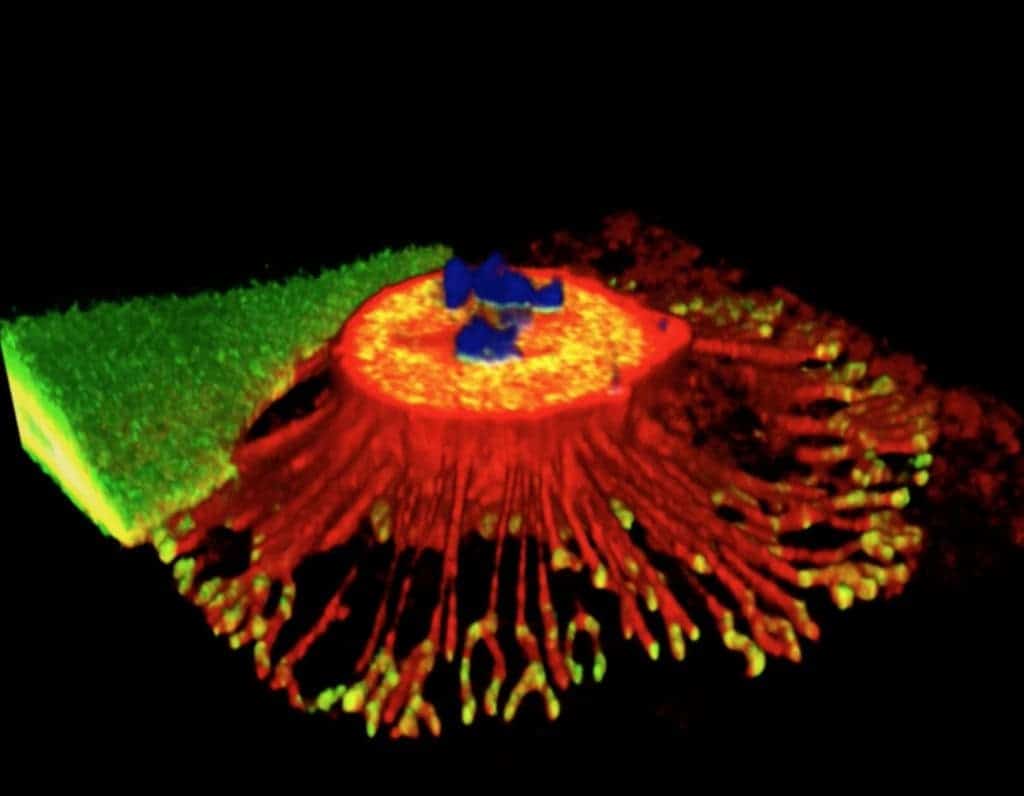 Cells are round-ish, soft-ish things. So then how do they tie together to form robust tissues? Well, the secret lies in a structure that surrounds them — a net-like formation known as the extracellular matrix. Much like the mortar in between bricks, this matrix brings cells together into a coherent whole.

Still, the matrix is an exclusive place — only those with special receptor molecules (adhesion complexes) on their surface are admitted. The structure discovered by the team is one such adhesion complex.

Yet more to discover

“It’s incredibly surprising that there’s a new cell structure left to discover in 2018,” says principal investigator Staffan Strömblad, professor at the Department of Biosciences and Nutrition at the Karolinska Institutet.

“The existence of this type of adhesion complex has completely passed us by.”

The team discovered a new type of protein complex that cells use to attach to their surroundings and plays a key part in cell division. Much like other adhesion complexes, it connects the outside to the cell interior and informs the cell about its immediate environment, affecting its properties and behavior. What’s special about this one is its unique molecular composition and shape — the team christened the structure ‘reticular adhesions’ to reflect their net-like shape.

While other known adhesion complexes break down during division, reticular adhesions remain intact and attached to the cell wall during the process. This discovery could help solve the long-standing question of how cells remain attached to the matrix as they divide. The team further reports that the new structure controls where daughter cells go after division, ensuring that they occupy the right place in the overall tissue.

“Our findings raise many new and important questions about the presence and function of these structures,” says Professor Strömblad. “We believe that they’re also involved in other processes than cell division, but this remains to be discovered.”

For the study, the team looked at human cell lines using confocal microscopy and mass spectrometry. To better understand the function of reticular adhesions, they add, further research efforts will need to examine them in living organisms.

Apart from the direct scientific merits of the discovery, the biggest takeaway (for me) from this research is that nature is way more complex and complicated than we give it credit for. We shouldn’t rest on our laurels because we’ve ‘discovered everything’ — we’re nowhere near done yet.

The paper “Reticular adhesions are a distinct class of cell-matrix adhesions that mediate attachment during mitosis” has been published in the journal Nature Cell Biology.